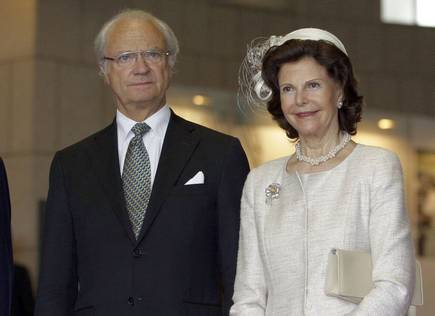 Two days before the arrival of the Swedish Royal couple King Carl Gustaf and Queen Silvia, and senior Ministers, including Foreign Minister Anne Linde, Stockholm sent its strongest message on Jammu and Kashmir thus far, urging the government to lift all restrictions placed in the former State, and calling for it to “involve” Kashmiris for a resolution of the issue. The statement, made by Ms. Linde in the Swedish Riksdag or Parliament on Thursday in reply to a question, came ahead of a week-long visit (December 1-6) by the Swedish delegation, where the two sides are expected to announce an important polar research agreement, hold the first “innovation council” dialogue, discuss cooperation on defence, clean technologies, tackling air pollution, and trade.

“We emphasise the importance of respect for human rights, that an escalation of the situation in Kashmir is avoided and that a long-term political solution to the situation must involve Kashmir’s inhabitants. Dialogue between India and Pakistan is crucial. Sweden and the EU (European Union) urge the Indian government to lift the remaining restrictions imposed on Jammu and Kashmir. It is crucial that free movement and communication opportunities are restored,” the statement by Ms. Linde in the Riksdag said. The statement calling the situation in Kashmir “worrying” follows a shorter statement made in the Swedish Parliament on September 13, and a Twitter statement issued by then Foreign Minister Margot Wallstrom on August 10, days after the Indian government’s move on Article 370 in Jammu and Kashmir.

When asked about Sweden’s position, its Ambassador Klas Molin said that Stockholm was fully aligned with the European Union that has issued similar statements and held a special hearing on the situation in Kashmir in recent weeks.

“The Kashmir issue is a long-standing one. We see it as emanating from a bilateral dispute and thus has to be resolved through dialogue between India and Pakistan. That is the EU’s position. The other main tenet is that Kashmiris should have a say in their own future,” Mr. Molin told The Hindu.

The Swedish statement follows statements of concern by other visiting European leaders like German Chancellor Angela Merkel, and Finnish Foreign Minister Pekka Haavisto. Mr. Molin did not rule out that the Kashmir issue would be raised in bilateral discussions next week, when a meeting between Ms. Linde and External Affairs Minister S. Jaishankar is expected to be scheduled, but said King Gustaf was unlikely to make any “political” comments. However, he said that Sweden accepts India’s position that the move on Article 370 was an “Indian” issue, that Sweden had noted that both Houses of Parliament supported it, and that “the Supreme Court is hearing petitions on the constitutionality of the measure”.

Defence is another major area of cooperation between India and Sweden. Swedish major SAAB has pitched its Gripen fighter jet for the Indian Air Force tender for 114 jets for which the bid documents have been analysed and specifications are being finalised. In addition, the two countries are working on a maritime agreement for logistics services sharing in the Artic and in Antarctica, to be announced during the visit.

Apart from the Ministers of Foreign Affairs and Trade, the Swedish delegation comprises a large business delegation, which is expected to discuss new collaborations to boost the present bilateral trade of $3.37 billion, as well as prospects for the India-EU Bilateral Trade and Investment Agreement (BTIA).

“We would like to see an FTA (free trade agreement) and an investment protection agreement as part of an FTA,” Mr. Molin said, referring to a statement by Commerce Minister Piyush Goyal during his visit to Stockholm last month about the BTIA talks, which have been suspended since 2013. “The outgoing European Commission made many statements but we were not able to restart the negotiations and we hope the new Commission will do that,” he added.

During their visit, the Swedish King and Queen will travel to Delhi and Mumbai for official engagements, and will also visit Uttarakhand, and see the Ganga river at Hardwar and Rishikesh, and spend time in at the Jim Corbett National Park.

How an educated man can turn out to be #UsmanKhan?