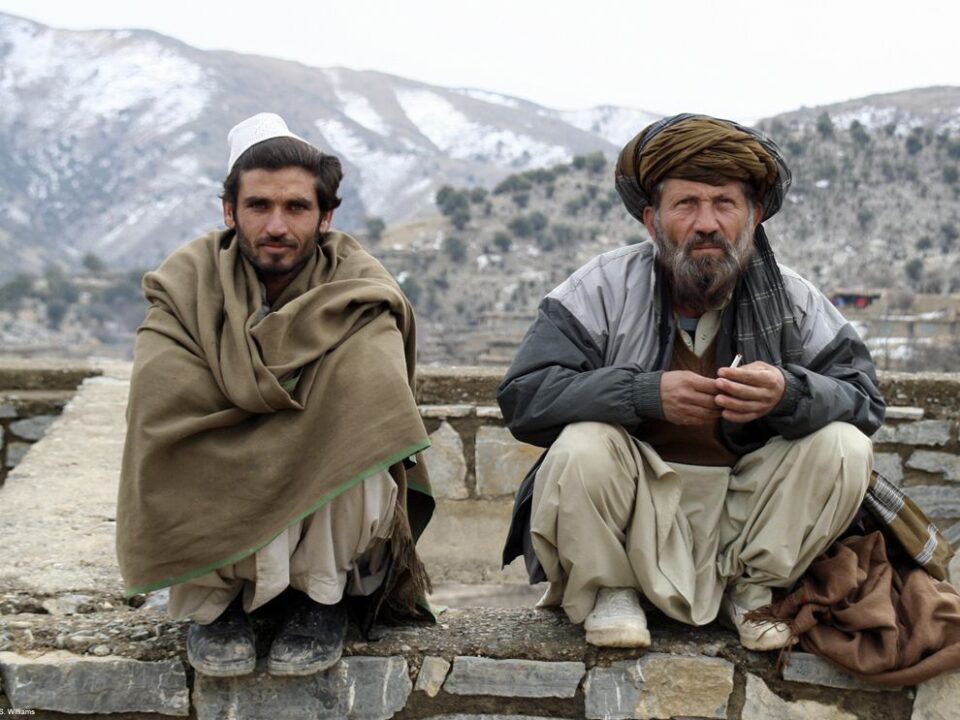 As the world witnessed the Taliban take control of Afghanistan as the United States finalised the withdrawal of its soldiers from the country, the West’s major concern appears to be what will now happen to Afghan women.

“The Taliban’s Return is Awful for Women”, says the Atlantic. “Women in Afghanistan Fear Return to a Repressive Past Under Taliban” reports the New York Times. “Afghanistan: Why there are grave fears for women” is the title for a Sky News story.

These news reports aim to not only create the assumption that the West truly cares about Afghan women’s rights, but also implies women’s rights were in fact protected under the American occupation of Afghanistan.

While the plight of Afghan women is being used to whitewash the  US invasion of Afghanistan, men and boys are almost completely omitted from mainstream conversations about “the victims” of this war, and instead, there is a conscious erasure of their humanity.

Maya Mikdashi – in her article, Can Palestinian Men Be Victims? – examined the gendering of Israel’s war on Gaza in 2014 and the emphasis placed on women and children in the conversations about the victims of that onslaught. She explained how this approach accomplished many discursive feats, two of which are most prominent: “The massifying of women and children into an undistinguishable group brought together by the ‘sameness’ of gender and sex, and the reproduction of the male Palestinian body (and the male Arab body more generally) as always already dangerous.” The status of Palestinian men as victims, she pointed, always remains circumspect.

Similarly, Afghan men are almost never categorised as victims of war. At least in the West, it is always open to question whether they can be dispossessed, fear the violation of their civil and human rights, or can be considered a refugee that deserves compassion. Their experience is often speculated and almost never reported on. A simple Google search of “Afghan men” clearly shows that they are represented in Western research papers, news reports and social media posts merely as latently misogynistic perpetrators of violence.

In order to truly understand the reasons behind the demonisation of the Afghan man, however, we must look at why America and the West are so interested in “saving” Afghan women.

Shortly after George W Bush declared his so-called “war on terror”, the plight of Afghan women under the Taliban became a prominent talking point in America. Then-First Lady Laura Bush, in a radio address to the nation, condemned the “severe repression against women in Afghanistan” and claimed that the “fight against terrorism is also a fight for the rights and dignity of women”. Time magazine even released a report on the oppression of women in Afghanistan titled Lifting the Veil. At the UN’s International Women’s Day celebration on March 8, 2002, Laura Bush gave another well-publicised speech in which she argued that the war in Afghanistan is “helping Afghan women return to the lives they once knew”.

The US administration used feminist language when talking about Afghanistan, not because it really cared about Afghan women, but because it believed such an approach could help it garner widespread support for its invasion.

The media played an important role in gendering the US war in Afghanistan. Soon after 9/11 and the start of the “war on terror”, alongside numerous reports on abuse and discrimination faced by women in Afghanistan, media organisations started circulating photos of Afghan women clad in burkas under the Taliban’s rule and juxtaposing these images against photos from earlier times when their clothes were not policed by men. With the identification of Afghan women as oppressed and in need of liberation, gender was brought to the forefront of global politics, and all Muslim men were identified as oppressors of women and the enemies of the Western civilisation. Suddenly, the US war in Afghanistan was legitimised as a feminist endeavour in the eyes of the American people and the wider international community.

And very little changed in the last 20 years.

Now, photos of Afghan women taken in the last 20 years are being circulated on social media and published by news organisations to underline how “free and safe” they were under American occupation and what they will lose under the Taliban’s rule.

Except, of course, Afghan women were not “saved” by the occupation forces. The US and its NATO allies did not protect Afghan women from oppression and violence, they only created a different violent reality for them. The economic and political instability created by the invasion, along with routine night raids, drone attacks, and active fighting in Taliban strongholds exacerbated the obstacles women face in Afghanistan during the occupation.

The US and its allies undoubtedly provided new opportunities and much-needed aid to some Afghan women during their time in the country. However, their efforts were focused mostly on a specific subset of Afghan women whose suffering fit neatly into their narratives about the inherent violence and misogyny of Afghan men.

In a recent article for Al Jazeera, for example, Sahar Ghumkor and Anila Daulatzai explained how, after the US invasion, Afghan women quickly realised they would be deemed more worthy of US aid if they say their suffering is caused by the Taliban and the Taliban only. They even quoted one Afghan woman as saying: “We figured out that if you tell them that the Taliban killed your husband, you get support. We are not useful if we tell them the Soviets killed our husbands, or if our husbands died in the 1990s. They only care if the Taliban made us widows.”

Indeed, the US did not care for the complexities and different realities Afghan women faced due to four decades of war that ravaged their country. They were only interested in the experiences of Afghan women that fit into their narratives and help justify their “feminist” invasion.

And Afghan men, however much they may have suffered at the hands of the Taliban, let alone anyone else, have altogether been ignored by the US. In the eyes of the West, Afghan men were never victims – they were the perpetrators of 9/11, the fighters in al-Qaeda, the members of the Taliban, and oppressive figures that can only reign terror on their society.

This belief that every single Afghan man is a threat had devastating consequences.

Most American soldiers deployed to Afghanistan, just like their political leaders and generals, did not make any attempt to differentiate male Afghan civilians from Taliban fighters. As a result, they routinely turned their weapons on innocent Muslim male bodies.

The Americans routinely tortured, unlawfully imprisoned and killed male Afghan civilians. Many Afghan men, for example, were imprisoned and tortured in “black sites” in the Bagram airbase complex situated north of Kabul, with no formal charges.

Mullah Habibullah and taxi driver Dilawar were only two of these blameless victims of America’s war on terror in Afghanistan.

Habibullah died on December 4, 2002, in Bagram from a pulmonary embolism caused by blunt force injury to the legs – he had been chained to the ceiling and repeatedly beaten. The soldiers responsible for his death tried to justify their actions, saying he was “non-compliant”.

22-year-old Dilawar died in Bagram on December 10, 2002. At the time of his death, he weighed merely 55 kgs. Despite not being accused of any crime, he was chained to the ceiling of his cell and left suspended by his wrists for four days. During his short detention, his legs were also beaten to a pulp. He survived just five days in captivity.

Since 2001, thousands of innocent Afghan men like Dilawar and Habibullah have been killed – some by the US, others by the Taliban. Yet, these men are being seen neither as victims of the US invasion nor as human beings deserving of the West’s sympathies – in the eyes of many observers in the West, they are nothing but potential security threats that have been rightfully eliminated.

According to the Bureau of Investigative Journalism, between January 2004 and February 2020, the US conducted at least 13,072 drone attacks in Afghanistan, killing 4126 to 10,076 people. 300 to 909 of those killed are believed to have been civilians.

It is impossible to know the real number of innocent Afghans, and especially Afghan men, who perished in the US’s drone war on Afghanistan because consecutive US administrations did everything they could to obscure this number.

As the New York Times explained in 2012, for example, the Obama administration counted “all military-age males [killed] in a strike zone as combatants … unless there is explicit intelligence posthumously proving them innocent.”

“Counterterrorism officials,” the Times article went on to say, “insist this approach is one of simple logic: people in an area of known terrorist activity, or found with a top Qaeda operative, are probably up to no good.”

In other words, Afghan men facing no charges were routinely killed by the US, with impunity, simply because they happened to be men living in a region the US wanted to “save and civilise”.

Of course, not all male deaths in Afghanistan during the 20 year US invasion were treated equally. The US soldiers who lost their lives in Afghanistan were treated as heroes who died for their country, for democracy, for human rights – despite the fact that the military they serve was known to be committing grave human rights abuses against innocent Afghan civilians.

Now that the US is out of Afghanistan, it is time the international community changes the way it perceives the men affected by this invasion and its grave consequences.

Just like Afghan women and children, Afghan men also endured decades of relentless wars, oppressive regimes, and indiscriminate drone attacks. We cannot continue to view them all as inherent misogynists and security threats – they are human beings who deserve our support and sympathy.

The original article can be found at the following link. No copyright infringement is intended.

Altercation between UK and France over migrant boats