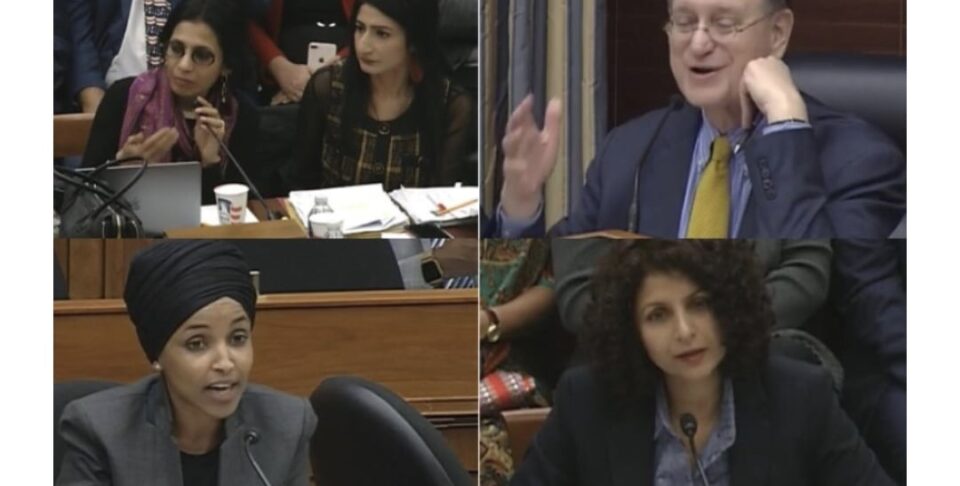 US Congresswoman Ilhan Omar on Tuesday slammed a journalist from Times of India for making ‘dubious’ claims in favour of the Indian government on the current situation in Jammu and Kashmir. This evoked an angry response from Aarti Tikoo Singh, who felt that her professional integrity was being questioned by the Congresswoman.
Responding to Singh’s opening remarks at the US congressional sub-committee hearing, Omar reminded the former that the job of a reporter was to find the ‘objective truth about what’s happening and report it to the public.’

“Ms Singh, a reporter’s job is to find the objective truth about what is happening and report it to the public. You have an enormous audience at The Times of India and you have an enormous responsibility to get it right. I am aware of how the narrative shaped by reporting can distort the truth. I am also very aware of how it could be limited to sharing only the official side of the story. The press is at its worst when it is a mouthpiece for a government.”

Questioning Singh’s ‘version of the story’ on the current situation in Kashmir, Omar said, “In your version of the story, the only problems in Kashmir are caused by what you call militants, the only people protesting to break away from India; and are all nefariously backed by Pakistan. You also make the incredibly dubious claim that the Indian government’s crackdown in Kashmir is good for human rights. If it was good for human rights, Ms Singh, it wouldn’t be happening in secret. You make, what I might call, a feminist case for the occupation of Kashmir and communication shutdowns, saying it will be better for women.”

As expected, Singh, who was nominated by the Indian government to speak at the hearing, did not like Omar questioning her integrity. She said, “My record, my professional record is that I have lashed out at every single government in India on various issues, from human rights violations committed in Kashmir to the lynchings over beef. I have a record of being non-partisan throughout in my profession of the last 20 years. So for Ms Omar to say… such accusations against me, is really condemnable.”
Other panelists included known Kashmiri activists Nitasha Kaul and Angana Chatterji with both slamming the Indian government for the gross human rights violations in Kashmir. When Omar asked Chatterji if she agreed with Singh’s assessment that what has been happening in Kashmir since 5 August was good for the local population, the latter replied, “Hell no. Absolutely not. As you said yourself, if it was good for anybody, we would announce it. It will be announced to the world. It would be free. We would be able to go there…Most importantly, the people who it’s being done to would be appreciative.. They (Kashmiris) said that they felt like they were being caged. They’ve said that their rights are being revoked…In this instance, when we talk about the BJP government, we also need to understand their ideology. Because their mandate for the first time in India openly to render India into a Hindu state.”

Kaul, for her part, said, “When we express concerns about forced disappearances in other parts of the world, that’s precisely why we should care. Parveena Ahanger, who’s the chairperson of Association of Parents of Disappeared People, whose son is a victim of that. She’s been leading that struggle for 20 plus years, on International Day for Disappeared this year, they were not even allowed to gather and mourn. Something they’ve done at the 10th of every month and at the end of August. This is an elderly woman, who’s led this campaign, who’s been nominated for the Nobel Prize is not allowed that space.”

Kaul also repeated the assertion made by Chatterji as she highlighted the danger of political Hinduism or Hindutva ideology. “Religion is neither a necessary nor a sufficient condition for violence. No religion is. So this is not about Hindusim. This is about political use of Hinduism that is being made to convert India into a Hindu nation where after the revocation of Article 370, BJP leaders have said ‘we want to go to Kashmir and marry fair women now.’

Joker- A Sociological And Literary Perspective