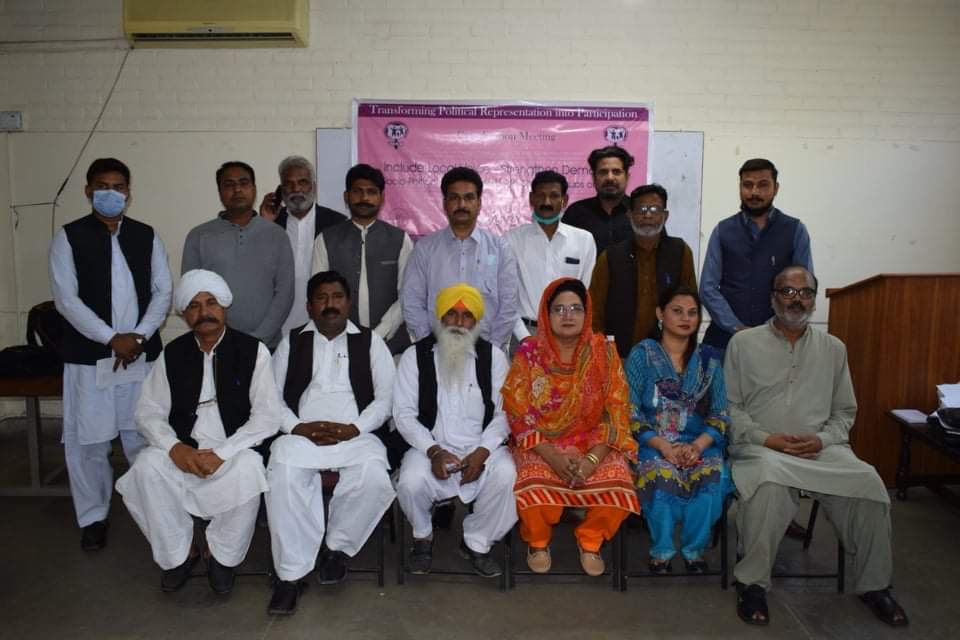 Press Release (Faisalabad): Minority wings of mainstream political parties are a representative model that is by no means serving influential minorities’ political participation. For passing a sincere gesture to include minorities into political processes, Political Parties must allocate quota for the party tickets on general seats. There must be a liaison between minority wings and central decision-making/mother bodies for having the input and consensus of minority members around decisions related to them. The establishment of local governments/institutions would be instrumental in ensuring the inclusion of grassroots political leaders from minority communities. These concerns were raised by the cross parties Minority Caucus comprising the members of minority wings Faisalabad and Nankana Sahib – constituted by the Association of Women for Awareness and Motivation (AWAM) – in a coordination meeting at Faisalabad. The keynote speakers included Shazia Geroge, Naseem Anthony, Lala Robin Daniel, Manzoor Anthony, Ranjeet Lal, Bashir Bhatti, Tahira Anjum, Yasir Talib, and Sarfraz Raja. The prime purpose of the meeting was to evaluate the role of minority wings in practical politics and assess their authority within political parties’ structures. Shazia George – director AWAM and former member of PCSW, said, “without politicizing the minorities’ issues, the resolve is not possible and such context demands concerted efforts of mainstream political parties.” The AWAM’s director program, Naseem Anthony, said, “the lop-sided policy of political parties to include minorities into the political process through constituting minority wings is not instrumental in addressing the issues of religious minorities.” He suggested, “political parties must allocate quota in party tickets for minorities and support them in the constituencies.” Lala Robin Daniel – president Minority Caucus (MC), said, “minority wings of political parties are the cosmetic arrangement of minorities’ political participation, and for not being a part of mother bodies of political parties, it is merely a representative model that must be transformed into a participatory model.” Manzoor Anthony, convener MC, said, “local government is the only source ensuring the political engagement of local communities, ill luck it may be, the political parties have not paid attention to strengthen this mechanism of effective political participation of all segments of society.” He called upon the authorities, “the ruling party must strengthen the local governments and create conducive circumstances for the participation of minorities, women, youth and other underserved groups in practical politics.” Yasir Talib, joint secretary communication MC, said, “we have the energetic youth, which is still unattended by the political parties, owing to it, the youth is abhorring the politics.” He called on, “political parties must engage the youth in the political process and initiate political schools for the democratic education for youth – focusing female youth.” Tahira Anjum – vice president MC, Ranjeet Lal, Vice President MC Nankana Sahib, Bashir Bhatti – General Secretary MC, and Sarfraz Raja also among the dignitaries who showed their consensus around the demands.