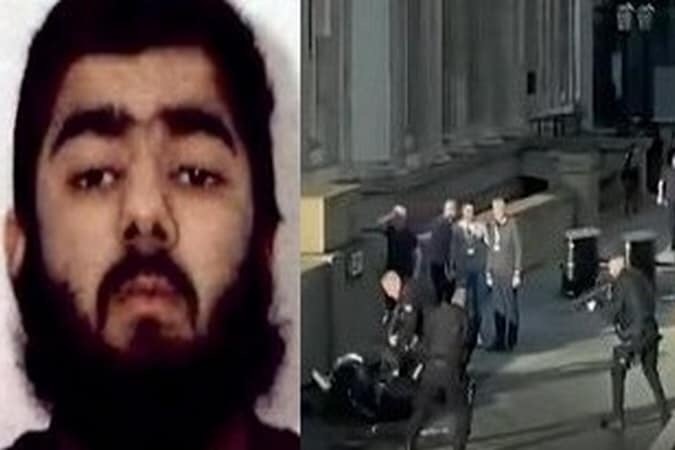 To see children turning from a ‘parent’s delight’ to a ‘parent’s nightmare’ is a dilemma every parent who sees these pictures confronts today. When ”debauchers and petty criminals” like Anjum Chaudary and Awar Awalski become the ”ideological authorities” speaking the ”language of hate venom,” the only thing those messages can spew is blood and hatred. These young men are taught to become ideological terminators.

The nation of #politicalIslam is consumed in passion and ‘ideological addiction’ of discovering new theories and plots of conspiracies (like opium addiction of the early 20th century Orient*).

The failure to issue clear rebuke, denunciation of ‘terror’ by the rank and file of the 1.4 billion strong nation at the cusp of the 21st century in this day of knowledge has created confused minds that are easily enticed towards ideological toxins prescribed by the radicals. In this century, the crescent of Islam faces its nemesis in shape of ‘Ideological #radicaladdiction’; it is as big a challenge as addiction from substance abuse faced by the Chinese.

How does an educated mind turn into a killing machine? The graduates of #AnwarAlAwlaki #schoolofterror!

I will refer to you to my 2010 article new names were added later:

You can be a Phd or a Professor or a Surgeon like Zawahiri but Milestones will turn and twist your head.’ The chronicle of a “lost” generation… How does an educated mind turn into a killing machine? (Now as ‘Syed Rizwan Farook, 28, and his wife Tashfeen Malik, 27’ joins the list evil doers)

‘the blazing question within the nation of Islam arises and one that the entire ‘nation’ wants to know the answer to is: what turns youthful, elegant well-educated men like Feisal Shazad, Ajmal Amir, Mohammad Siddiq Khan, Umar Farouk Abdulmutallab into terminators and hate-mongers who want to kill indiscriminately? ‘

What is this game changer ‘#Milestones’ by Sayyid Qutb that brainwashed #SaadAziz into a killing machine? This book have changed thousands of minds into killing machines.

Once you are into Syed Qutb’s ‘Milestones’ – you are done with. These all young educated western born groomed terrorists are children of Syed Qutb; the lost generation that believes in the essential charter of the jihad movement that is Sayyid Qutb’s Milestones. All are heavily influenced by Milestones. Milestones (Ma’alim ‘ala Al-Tariq), was an immediate bestseller and is said to have been published in close to 2,000 editions. Milestone is the Das Kapital of the Radical Islam.

Syed Qutb revived Ibn Taymiyyah who had split the world up into two parts; namely Darul Islam and Darul Kufr/Harb, but also recognised a third type, and as in the case of Mardin. He influenced later thinkers Muhammad ibn Abd al-Wahhab , Hasan al-Banna , Madudi and Sayyid Qutb .His legacy and authority has been used by some twentieth-century Islamist groups to declare jihad against ruling governments. The modern-day extremists are employing his outdated ‘Mongol and Mardin’ fatwas to provide groundwork and legal justifications to their illegal ends of killing. Use of the anti-Mongol and Mardin fatwas today is cause of all the killing and be headings. The ultra radical jihadists all over using them to justify violent action against whomever they deem to have fallen afoul of Islamic law, calling it Takfir.

Behind this eye of the rising storm of religious radicalism lie people like #Zawahiri, Osama bin Laden and #AnwaralAulaqi (or al-Awlaki) all have one thing in common they have read ‘#Milestones’ and are students of Sayyid Qutb. Sayyid Qutb (1906-1966) is widely accepted, not only as one of “the spiritual leaders of radical Islamism”, but as “the architect of worldwide jihad”. Qutb´s influence has been profound. His thinking has provided the motivation and legitimizing ideology behind 9/11 and other recent terrorist attacks on the west.

#SyedQutb regarded as the father of modern fundamentalism and described by his (Arab) biographer as “the most famous personality of the Muslim world in the second half of the 20th century, He wrote in the Milestones “….The whole world is jahili: barbaric, ignorant, corrupt – “The whole world”, proclaimed Qutb, “is steeped in jahiliyyah”, a “jahiliyyah . . . based on rebellion against God´s hakimiyyah [sovereignty] on earth”. All societies, including those claiming to be Muslim, were regarded by Qutb as mujtama´at jahiliyyah (pagan societies). He was hanged for this book.

Qutb was the most influential advocate in modern times of jihad, he initiated the doctrines that legitimise violent Muslim resistance to regimes that claim to be Muslim, but whose implementation of Islamic precepts is judged to be imperfect.

#Milestones, generally considered one of, if not the most influential Islamist tract ever written. You can be a Phd or a Professor or a Surgeon like Zawahiri but Milestones will turn and twist your head. One of Muhammad Qutb’s students and later an ardent follower was Ayman Zawahiri, who went on to become a member of the Egyptian Islamic Jihad and later a mentor of Osama bin Laden and a leading member of al-Qaeda. #Zawahiri was first introduced to Qutb by his uncle and maternal family patriarch, Mafouz Azzam, who was very close to #Qutb throughout his life. Azzam was Qutb’s student, then protégé, then personal lawyer and executor of his estate—one of the last people to see Qutb before his execution.

Osama bin Laden was also acquainted with Sayyid’s brother, Muhammad Qutb. A close college friend of bin Laden’s, Mohammed Jamal Khalifa, narrated that bin Laden regularly attended weekly public lectures by Muhammad Qutb, at King Abdulaziz University, and that he and bin Laden both “read Sayyid Qutb. He was the one who most affected our generation.”

Anwar Al Awlaki was a dual US-Yemeni citizen. An individual who was very seriously influenced by the corrupt ideology of a this calamity called “Sayyid Qutb. While imprisoned in Yemen, Anwar al-Awlaki became influenced by the works of Qutb. He would read 150–200 pages a day of Qutb’s works, describing himself during the course of his reading as “so immersed with the author I would feel Sayyid was with me in my cell speaking to me directly.

In Milestones (1964), and elsewhere, Qutb argued that this global jahiliyyah “denotes rejection of the divinity of God and the adulation of mortals”. Qutb emphasized the concept of ´ubudiyyah, the divinity of Allah and the servitude of mankind to Him. However modern society, he reasoned, “transfers to man one of the greatest attributes of God, namely #hakimiyyah and makes some men lords over others”.

In his commentary on the Quran, Qutb stated that “the whole world in the eyes of Islam is divided into two, the first is darul-Islam, and the second is #darul_harb”. This, as one recent writer remarked, “is the prism through which Qutb viewed the political systems of the world, dividing them into Islam and jahiliyyah”. Darul-Islam is where Sharia´h law prevails. Darul-harb is “any land where the Kufr law is dominant even if everybody in the land is Muslim”.

In contrast to darul-harb, (depraved societies usurping the sovereignty of God), Qutb concluded that a true Islamic society is “a superior haven of moral values and clean, healthy relationships”.Islam therefore is regarded as the ultimate panacea for all social, economic and political problems.

Jihad can be waged against Muslim rulers

Qutb, in Milestones, taught that Muslims and Muslim rulers who fail to implement God´s laws are #takfir #apostate, they live in a state of #jahiliyya #ignorance and must be opposed. In regarding such rulers as takfiri Qutb revived and popularized the thought of the Medieval jurist Ibn Taymiyya.

This idea has influenced the rise of contemporary takfiri militants who use this doctrine to legitimize the killing of Muslim by Muslim for alleged apostasy. In contrast to Abul Ala Mawdudi 1903-1979 who advocated the establishment of “Allah´s law in Allah´s land” by a gradualist methodology of infiltration into both secular and nominal Muslim lands, Qutb declared direct, immediate action against jahili and takfiri states.