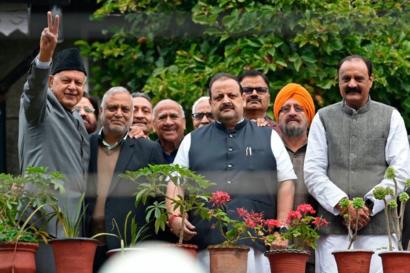 Dozens of mainstream political leaders and workers have been under detention in Indian-administered Kashmir since August, when India stripped the region of its semi-autonomous status. Sameer Yasir reports on why political workers in the valley feel betrayed.

Saleem Mir stood pensively by the window of his room overlooking the Jhelum river, which cuts through the heart of Srinagar and flows into Pakistan.

Mr Mir, who toiled for years to get people to vote for Kashmir’s oldest political party, the pro-India National Conference, now feels like a total outcast in his own homeland.

Kashmiris like Mr Mir are used to being branded as “traitors” by their own people for siding with India during the 30-year armed revolt against Delhi’s rule in the Muslim-majority region. Many have relatives or friends who have been killed by militants for siding with India.

“Now we are also enemies in the eyes of India,” said Mr Mir, who belongs to Kulgam district, a region that has witnessed a spiral of deadly violence in recent years.

In August, Prime Minister Narendra Modi’s ruling Bharatiya Janata Party (BJP) oversaw a crackdown that they argued was necessary to prevent disorder in the disputed region.

It was stripped of its autonomy, split it into two federally-run territories, put under a lockdown, and most of the state’s political leaders and workers, including those who have been loyal to India, were incarcerated.

“Our intention is that politicians do not engage in any activities that could serve as a magnet for violence, as it has been the case in the past. A related issue is that social media and the internet have been used to radicalise. We want to prevent the loss of life,” India’s Foreign Minister Subrahmanyam Jaishankar said.

Mr Mir was among more than 5,000 people, including businessmen, civil society members, lawyers and activists, who were detained. Those still under detention include former chief ministers Omar Abdullah, Farooq Abdullah and Mehbooba Mufti – the first woman to be hold the position – as well as several former lawmakers.

Former chief minister Mr Abdullah, still a member of parliament, has been detained under the controversial Public Safety Act (PSA), which allows detention without formal charge for two years, among other things.

Mr Abdullah, whose family had been instrumental in tying Kashmir’s future to Delhi, appeared on television before his detention and appealed to the people of India, saying he had stood with them and it was their time to reciprocate.

Mir Mohammad Fayaz, an MP belonging to the PDP, has written to the federal Home Minister Amit Shah, demanding the release of all political leaders. He said that the leaders had been recently shifted to a new jail in “a very humiliating and downgrading manner”.

‘Wiping out the middle ground’

Kashmir’s political parties have always operated in a middle-ground – between integrating completely with India and seeking outright independence.

By the very act of participating in India’s democratic processes and fighting elections, they acknowledged Delhi’s right to have a say in the affairs of the region. But in order to win votes, they have had to speak the language of popular sentiment.

Therefore, its two main parties, the National Conference (NC) and the Peoples Democratic Party (PDP) officially stand for Kashmir’s right to autonomy and self-rule within the federal structure of India.

And for more than a decade, after the insurgency ebbed, the status-quo in Kashmir largely worked in India’s favour. People voted in elections and India said it proved that democracy was thriving in the region. With the detention of the leaders, things have changed.

The latest move by Delhi has “wiped out the middle-ground held by Kashmiri politicians” and this void could be very well “filled by militants”, said Siddiq Wahid, a historian.

Mr Wahid added people would now confront these political parties by saying: “We knew it, we told you so all along.”

Mr Kak, a native of Kashmir who has been part of many initiatives aimed at resolving the dispute, said India has lost 70 years of its hard work in Indian-administered Kashmir: “Who will vouch for it now?”

Political workers, who have backed India despite facing threats, attacks and public humiliation, feel completely let down and fear for their safety now.

“We should have never trusted India,” Mr Mir, now a free man, said.

Rehman Sheikh, whose cousin, a founding member of PDP, was killed and his house set on fire in Shopian district, said Mr Modi’s government had simply “belittled my brother’s sacrifice”.

“The India for which we bled so badly has rendered us worthless by forcibly taking away our basic political rights,” Mr Sheikh said.

“Party workers come to us and ask ‘what is our future?’,” said Tanveer Alam, whose cousin, a former lawmaker, is also being detained. “I have no answers. I keep silent.”

Mumtaz Peer, who saw his father killed by militants, said if “gunmen arrive at my door, no one will now come to save me”.

“We are finished,” Mr Peer, who worked for a former state lawmaker, said. “We are just waiting for this time to pass.”

Mr Peer said that had the valley’s mainstream political class invested time and effort to lobby for Kashmir’s independence instead of trying to strengthen India’s hold on the region, people “would have achieved the goal of independence”.

“Our only problem is we are Kashmiris and Muslim. We fought for India in Kashmir and this is what we got in return,” Mr Peer said.

Ghulam Hassan Rahi, a politician who fought many elections in northern Kashmir during the heyday of insurgency, and continued his activism despite threats from militants, said now when he meets his political workers, he keeps his head down.

One worker, Mr Rahi said, recently confronted him, telling him that it doesn’t matter “how much bidding Kashmiri Muslims will do for India, Delhi will never trust them because they are Muslims”.

“I kept my head down and walked away,” Mr Rahi said.