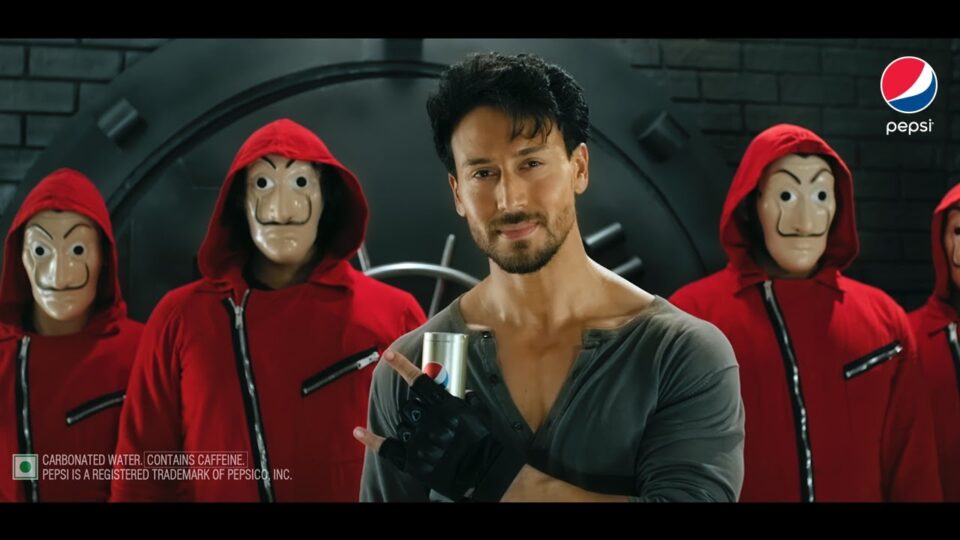 Pepsi in conjunction with Netflix – the famous of all streaming services – have teamed up to commemorate the conclusive season of remarkable TV streaming series Money Heist. Pepsi has introduced a limited-edition collection of golden cans and packs themed on legendary series ahead of the series finale. The series finale is being streamed over Netflix starting September 3 and is undoubtedly leading up to the ultimate virtual fan celebration.

The famous symbolic motives from the hit series, the “Dali Mask” and “Bella Ciao” will be featured on Pepsi golden cans and packs.

Pepsi has also released a web film starring Tiger Shroff who serves as the regional brand ambassador for the brand. The Professor sends Shroff on a mission to find out lost golden cans and packs in the series. He efficiently accomplishes the mission at the end of this action-packed video and reveals how consumers can now register for the ultimate virtual fan party by scanning the Pepsi logo.

“Pepsi has always been a culture curator and the choice of the SWAG generation”, said Saumya Rathor, category lead Pepsi Cola, PepsiCo India. “As a result, we’ve always tried to reach out to our audiences at the right times and on the right channels”, said Rathor.

Money Heist has successfully established its own fan base. The series and its characters’ effortless SWAG has matched – in perfection – with Pepsi’s brand strategy. In the run-up to the biggest virtual fan event, we’re delighted to unveil the limited-edition golden cans/packs and the new digital film.”

“We’re ecstatic to commemorate Money Heist’s legendary fandom and its conclusion with Pepsi. All Money Heist enthusiasts should attend the upcoming virtual fan party, and all they need are Pepsi’s golden cans to get there. We can’t wait for this magnificent event, which will serve as a prelude to a fitting end to this legendary series”, Netflix India’s director of marketing partnerships, Shilpa Singh, stated.

“I love Pepsi and have been a long-time fan of Netflix’s Money Heist. I was ecstatic to be a part of a film with both of these elements, which I admire. I had a great time filming it, and I hope that everyone appreciates watching the action-packed sequence as much as I did filming it”, Shroff remarked.