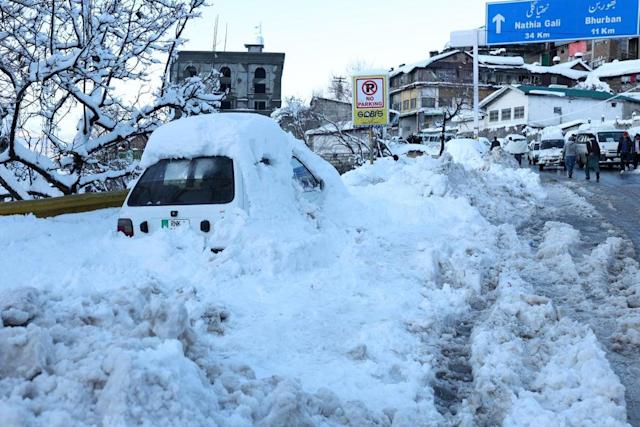 “Another tragedy and another proof of the incompetence of our govt. departments as death lay its icy hands on tourists” For the last week, heavy showers have lashed Islamabad, Rawalpindi, and nearby hill stations in galiyat area have received intermittent but heavy snowfalls. Notwithstanding this, a record number of people(155000) travelled northbound to enjoy the snowfall out of which 135000 made it outside safer while the rest were stranded. This large inflow of tourists to Murree notwithstanding is mainly because of the incompetent government not regulating the numbers because hill stations have a limited capacity with Murree only being able to accommodate 4000cars at a given time. The roads that lead up to and from Murree, should also be fixed. The reports revealed that the roads in and around the hill stations have not been repaired for the last two years and have unpaved patches which accumulated heavy snow causing traffic blockade. The reports also revealed that there was a slippery road patch outside a cafe in Murree but the administration did nothing to fix it. This patch was the exit route from Murree to Rawalpindi. With that being said, one can ask how can a govt be so irresponsible for not taking any action to restrain the tourist rush which continued onward for 5days. Having such a dire weather forecast, Why did the government wait for a whole week for the situations to get out of control in hill stations not realizing the significance of vigilance and timely actions? To your surprise some statesmen shrug off responsibility, are saying; this tragedy occurred merely because of the unprecedented tourist rush which is also blatant negligence on the part of any government official or department and is clearly rubbing salt on the wounds of those who have lost their loved one. Everything needs to be regulated in tourist places, emphasis should be laid on overcoming the lack of infrastructure in Murree. The whole issue should be handled in a contemporary manner,” the PM stressed. To regulate tourist inflow in such dire weather forecasts, officials have to abide by and work under already existing infrastructure that is imperative to avoid any more tragedies like this. Condolences to those who are mourning over the sudden, tragic and heart-rending losses of their loved ones!