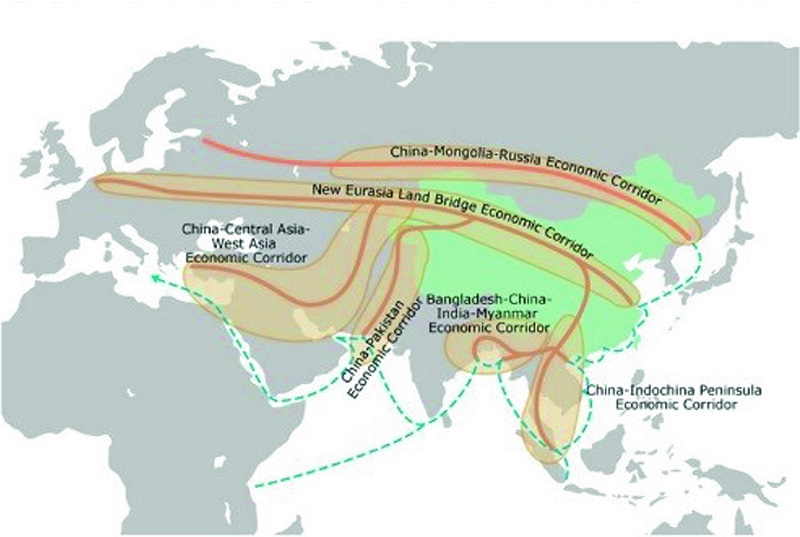 About the first of these two developments, Alexey Maslov’s Russian-language interview to Interfax should be Google Translated and read in full by anyone interested in learning more about Russia’s evolving views towards BRI.

The Alt-Media Community’s disparate members are united by their dogmatic belief that Russia and China are working closely with one another on all levels in order to advance their shared grand strategic interest of accelerating the emergence of the Multipolar World Order. This naturally presupposes that they’re continuing to make progress on President Putin’s previously expressed intention last year to integrate his country’s Greater Eurasian Partnership with the New Silk Road, but recent developments are creating the impression that Russia might actually be backtracking on China’s Belt & Road Initiative (BRI). These are the critical assessment of BRI last month by the influential Director of the Russian Academy of Sciences’ Institute of Far Eastern Studies and India’s eagerness all summer to court the Eurasian Great Power into joining its so-called “Indo-Pacific” projects. Upon analyzing the aforementioned more closely, it becomes clear that there’s some credence to that provocative claim which debunks the dogmatic belief of the Alt-Media Community.

About the first of these two developments, Alexey Maslov‘s Russian-language interview to Interfax should be Google Translated and read in full by anyone interested in learning more about Russia’s evolving views towards BRI. He was surprisingly candid for a Russian expert of his caliber in discussing the challenges inherent to this global series of megaprojects, as well as China’s grand strategic motivation in pursuing them in the first place. Maslov also implied some criticisms of it when sharing his assessment that China basically wants to take control of the global economy through these means, which also includes the use of so-called “debt traps”. Even more interestingly, he claimed that Russia isn’t a part of BRI contrary to conventional belief, but nevertheless seeks to pragmatically cooperate with it. Maslov then elaborated on why this is so, focusing on the problems related to their bilateral trade and investment relations. Altogether, his interview is extremely insightful and should be taken seriously due to the influence that he wields over Russian policy by view of his esteemed position.

The second development is less surprising since it’s been tracked for a while now, and that’s India’s eagerness to court Russia into joining its so-called “Indo-Pacific” projects. What was unexpected, however, was the spree of proposals that were made all summer. The first move came during the joint online conferencebetween the Russian International Affairs Council and the Indian Council of World Affairs in mid-July. The Indian Ambassador to Russia encouraged his host country to work more closely with his homeland in this trans-oceanic sphere, provocatively drawing particular attention to safeguarding “international rules and law” in the South China Sea where both have invested in Vietnamese offshore energy deposits contested by China. A suggestion was also made to undertake joint projects in Asia and Africa, which hints at Russia joining the Indo-Japanese “Asia-Africa Growth Corridor” (AAGC) like the author previously proposed. ThePrint.In reported in late July that the Indian Ambassador reiterated such cooperation proposals to Russian officials during that time.

India’s envisioned “Indo-Pacific” partnership with Russia isn’t just economic, but also carries with it very important military and diplomatic dimensions. The Economic Times reported in late July that the two countries might sign a LEMOA-like military logistics pact by the end of the year, the possible implications of which the author analyzed in December 2018 in his piece about how “A Russian-Indian LEMOA Could Lead To Logistics Pacts With Other Littoral States”. The other related development was Indian Foreign Secretary Harsh Shringla officially discussing “the proposal for a Russia-India-Japan trilateral mechanism with the Russian Deputy Foreign Minister, Igor Morgulov, on August 4.” While the official purpose of such a structure would likely be presented as advancing Russia’s possible participation in the AAGC, there’s no doubt that it would be perceived in practice as a “passively aggressive” move by China considering the context of its ongoing rivalry with those two Asian Great Powers.

The reason why all of this is happening so fast is likely due to World War C, the author’s neologism for the full-spectrum paradigm-changing processes unleashed across the world as a result of the international community’s uncoordinated efforts to contain COVID-19. One of the most immediate consequences was that Russia and China began to look askance at one another, which the author elaborated upon in his analysis earlier this year titled “Rare Wrinkle Or Growing Rift?: Russia & China Exchange Criticisms Over World War C”. In connection with this, Russia also sought to make progress on its “New Detente” with the US (the author’s neologism for ultimately reaching a series of “compromises” on a wide range of international issues) through its counter-COVID aid to America and their joint efforts to revive OPEC+. Taken together, these two pressing influences might have contributed to Russia’s changed attitude towards BRI, which isn’t necessarily a bad thing or anything to be seriously concerned about so long as Moscow manages to keep up its 21st-century “balancing” act.

The author has written extensively about Russia’s “balancing” act between China and India, but warned back in November in response to Russia’s perceived “tilt” at the time towards the latter that “Improved Russian-Indian Ties Must Be Balanced With Improved Russian-Chinese Ones”. Failure to do so would risk sparking a “strategic dilemma” with China, one which would be to both it and Russia’s detriment while definitely being to the decisive advantage of India and its new American patron. One unique proposal that the author made in a jointly authored academic article in May for the official journal of the Moscow State Institute of International Relations (MGIMO) concerns “The Prospects Of Russia And India Leading A New Non-Aligned Movement”, though the subsequent Galwan Incident makes it unlikely that Moscow will make any tangible progress on this front for the foreseeable future out of fear of triggering the aforesaid “strategic dilemma”. In fact, it can be argued that agreeing to any of India’s recent proposals without committing to symmetrical Chinese ones would lead to the same outcome.

Therein lies the challenge at the core of Russia’s grand strategy since it’s a lot easier to talk about “balancing” than actually doing it, let alone well enough to the point where neither party suspects the “balancing” state of ulterior motives. In the current context, if Russia joined the AAGC, agreed to a LEMOA-like pact with India, and/or participated in a trilateral mechanism alongside Japan, it might give rise to Chinese suspicions about Moscow’s true long-term intentions towards the People’s Republic. Under such circumstances, China would have no reason pay much attention to its prior plans of building the Eurasian Land Bridge through Russia en route to the EU since it already has several complementary corridors that it can rely on instead such as the “Polar Silk Road”, the “Middle Corridor”, and BRI’s flagship project of the China-Pakistan Economic Corridor (CPEC) and its related branch routes that the author describes as CPEC+. That in turn could undermine Russia’s ongoing systemic economic transition away from energy exports and towards becoming an East-West bridge for trade.

The Strategic Importance Of Clear Communication

It’s difficult at this moment to predict whether Russia will agree to all of India’s proposals, and if it does, whether it would also commit to any symmetrical Chinese ones to “balance” them out. The latter could prospectively see it loudly reaffirming its involvement in BRI by also making progress on the “Meridian Highway” segment of the Eurasian Land Bridge, reaching a LEMOA-like agreement with China, and pioneering a G2 mechanism for coordinating their policies all across Eurasia. Regardless of what Russia ends up doing, it mustn’t forget the strategic importance of clear communication in expressing its intentions towards China and India. Some of the constructive criticismsthat the author recently made about Russian strategy is that the country never articulated its “balancing” act and oftentimes takes its partners for granted, which is why it must proudly embrace “balancing” by explicitly making it the basis for its dealings with China and India as well as being open to “compromising” with each of them as regards their concerns about its ties with the other.

In his debut analysis for the Valdai Club about “How Russia Can Lead Eurasia’s Consolidated Response To The Economic Crisis”, the author proposed that the creation of a Russian-Pakistani trade corridor (“RuPak”) could help Moscow better manage its tricky “balancing” act with China and India. RuPak’s importance in this respect was explained at length in the author’s joint academic article about “Pakistan’s Role In Russia’s Greater Eurasian Partnership” that was published at the Russian International Affairs Council in June, which built upon his work the month prior about how “Improved Russian-Pakistani Relations Will Help Moscow Balance The New Bipolarity” between the US and China on the global level but also between China and India as regards their overlapping “spheres of influence” in Asia. As Russia begins to visibly backtrack on BRI due to World War C and the “New Detente” in parallel with seriously considering India’s economic, military, and diplomatic outreaches, it’s absolutely imperative that it retains its hard-earned goodwill with China, which it can do through RuPak.

After closely analyzing the drivers behind Russia’s newfound critical stance towards BRI as expressed by the influential director of the Russian Academy of Science’s Institute of Far Eastern Studies and its interest in possibly agreeing to India’s comprehensive outreaches over the summer, it begins to seem like Moscow isn’t backtracking on BRI as much as it’s clarifying the true relationship that it’s had all this time to this global series of megaprojects. President Putin’s “wishful thinking” for the future notwithstanding, it appears as though Russia’s involvement in China’s worldwide initiative wasn’t ever as extensive as the Alt-Media Community portrayed it as, which might understandably disappoint those countries’ supporters. Nevertheless, it’s important that everything is becoming much clearer nowadays since this recently revealed insight can assist analysts in better forecasting the course of their relations, as well as the next thrust of Russian foreign policy, which might potentially be towards Pakistan via RuPak in order to maintain Moscow’s tricky “balancing” act.