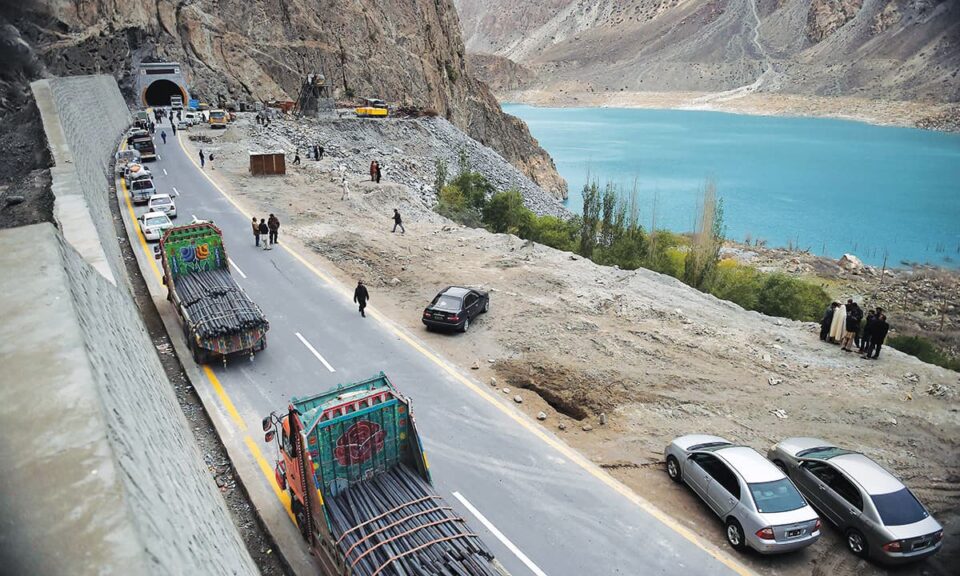 To go with story 'Pakistan-China-economy-transport, FEATURE' by Guillaume LAVALLÉE

Under developed country’s soil is pretty fertile sowing seeds of misconception turn little confusions into bigger than Himalaya and their solution rockier than Rockies whenever there arise a nationwide plan to develop country’s cores. One disruption and creation of misunderstanding pull the whole paradigm shift of development into never ending approximation of irreparably broken chains of socio, economic and politico setups into never ending chaos. Our premature mismanaged states institutes would play indirect partners role lending their portion in destabilizing process. Country’s owing cross border conflicts most often has to face direct or indirect interruption from native countries, because every development plan is enough creating storms in enemy’s stomach as cant digest ongoing development so their strategist gear up designing malicious designs of ulterior motives left no stone unturned to mislead project and push them in scorching desert of paralyzed investment and non-international economic cooperation.

Indian Endeavour of splitting up SAARC monopolizing member states by misusing her power to abuse Pakistan as a terrorist state globally, organizing a bloody havoc in Kashmir, tension at line of control and endeavor to left Pakistan alone in diplomatic ground by leaving no room for negotiation are the most recent malicious designs, India has tried her hands hard on. This whole mantra broadcasting conspiracies is motivated in more proportion as Nawaz Sharif’s disqualification has announced.
Why is this all provocation?

Sushma Suraj visited Pakistan on 5th heart of Asia conference organized by turkey every year, with a handsome proposal that regional cooperation in economic ground would kick off progress in Asia by saying heart of Asia cannot beat without blood running in its veins. “Indian proposal of having way to Middle East through Pakistan for free trade” thus Pakistan denied procuring this hot piece of cake lamenting over security concerns. Pakistan has been pretty comfortable with china by keeping her 65 years diplomatic good bilateral relations into perspective, while on the other hand Pakistan couldn’t party to India by keeping her past rocky relations, historical incidents and security concerns and as India don’t want to be the part of OBOR either; Pakistan couldn’t offer her more. So New Delhi has perceived two enemy’s alliance as a potential threat in shape of CPEC that will possibly challenge her monopoly in this region. After accomplishment of this project, Pakistan will not have to shiver under her strategic spell bound anymore rather made it difficult saving her own skin from both, that’s why this unbearable situation is ultimately giving fits to India and India’s returning these fits back to Pakistan on LOC and specially when prime minister is disqualified…. So this is a best time to spread disbelief and disappointment on the part of this plan.

What is this whole plan:

china wants to built OBOR (one belt one road). The main project is the Persian silk road which is designed in the region of Persian empire to connect modern china all the way through Europe (ancient Greek ) and Africa (ancient Rome ) .China started working on silk road from 1979 and signed treaty in 2013 after 11 years thorough study of each and every pros and cons of this project. CPEC is the starting point of silk road door way to middle east (hub of energy and mineral reserves) and the central Asia ( unexplored oil reserved states) aiming at building trade infrastructure network connecting ancient trade routes as a safe substitute way for the exploration of new horizons. It is to kick off not only Chinese exports but more than half of the world as 100 countries contributed in one belt, one road initiative. 30 countries along the route signed agreements to jointly build this road and 20 countries have teamed up with china in industrial cooperation. CPEC is the initial root of this wholesome infrastructure. The entire setup will achieve hats off trade through its veins (rail and road network) designed by china, accepted by Pakistan and signed by 60 countries around the world. CPEC is supposed to be the heart of Asia and OBOR vice versa so will be the Gawader for CPEC in Baluchistan. In order to stop this project by all costs, India strike up riots throwing Kashmir’s oil on fire try burning CPEC overnight. Therefore backed engineering in Baluchistan of insurgencies behind the scene focusing “the terminal of Gwader sea port” in order to split Baluchistan all the way up to Gwader to create another Bangladesh so to motivate it to be a hot brick that will burn everything if mishandled.

By keeping all above in mind, a big and concerning question starts pinching mind. Whether this massive investment plan will be able to see its accomplishment with full fledged capacity? Or will dilapidated by notwithstanding storms of controversies? And if not what potential does this project possess that kick off perusing controversies that assures a fit ground for its existence? What potential does it possess that assures it’s success instead of huge opposition and problems subject to the mall practices of foreign and domestic indirect intervention at the time of pm disqualification, will this whole plan depends upon Prime Minister only or will it affect it anyway and if not what potential it possess in itself to overthrow all controversy theories?

Another question is that why does China not utilizing already existing ports like port Qasim that has 40-45 births occupancy or the Karachi Port? Why she’s developing new infrastructure? Does China want to have her naval base in Gwader to occupy region….. Let us analyze the scenario in this perspective.

First of all, Gwadar is blessed with naturally fit features of geo-strategic location and remarkable natural characteristics that distinguish it from rest of ports situated around this zone. Nearly 60 ports are located around the area but only Gawader kicks off the all feature of a perfect seaport which is naturally blessed with the required level of 17/18 meter depth. Whilst generally ports are required to dig deep artificially to make them meet the needs of shipment and cargo activities, the Gwader port does not need it. Therefore, it has been preferred by China and that is a matter of deep concern for the competing ports.

Moreover, the greatest need for Seaports is that it must have a “hammerheads” like end. Therefore, every port has to adopt artificial construction process to have required shape that brings massive budget consumption. On the contrary, Gwadar naturally possess this characteristic.

If china and Pakistan build a joint naval base at Gwader, half of the world’s oil supply will be controlled through Strait of Malacca. Therefore this project is indigestible and so many controversy theories are surrounding it.

It is guarantee of oncoming prosperity in power sector , transport, road infrastructure, human capital , employment generation and due to Chinese stakes in Pakistan; security, that has always been a dying concern, seems to be settled ahead as presence of china on our coast will keep away certain malignant powers from meddling in Pakistan’s affairs. China will pay 1 billion dollar for security arrangement within country, which means china won’t let her burden on Pakistan to manage for her issues.
It is expected that Gwadar will generate huge income by providing Warehousing facilities to Shipping companies, Fishermen of area will be in a better position to ship their marine life directly.

Ship Building and industry will get a boost. Investment in Power Sector will rid the area with power shortage that will automatically push GDP by 2%. Pakistani car exports to china will get a fillip.
Quetta, Zob, Dera Ismail Khan; “all weather highway” will open up this area economically. Railway track from Gwadar via Quetta to Khunjrab will boost fruit exports from Baluchistan.

increase in violence may be the most effective way to scare Beijing off the ambitious plan And Islamabad has repeatedly accused India and others concerned of fomenting attacks with just that goal in mind. Insurgency and armed conflicts in Baluchistan are not a new phenomenon. But supporting hands forget the fact that peace in Afghanistan is almost impossible without the constructive role insurgency in Baluchistan. A trublent Gwader or Baluchistan will also effect Iran and Afghanistan equally.

Therefore, it is evident that CPEC is not a sow illusion and no conspiracy theory possess any capacity to derail this project as the project is signed by states rather than rulers. it is asserted that the ground realities are pretty different from words and ideologies flying around. CPEC is a game changer and if this game is played with a caution, it will change course of Pakistan’s economic horizons.