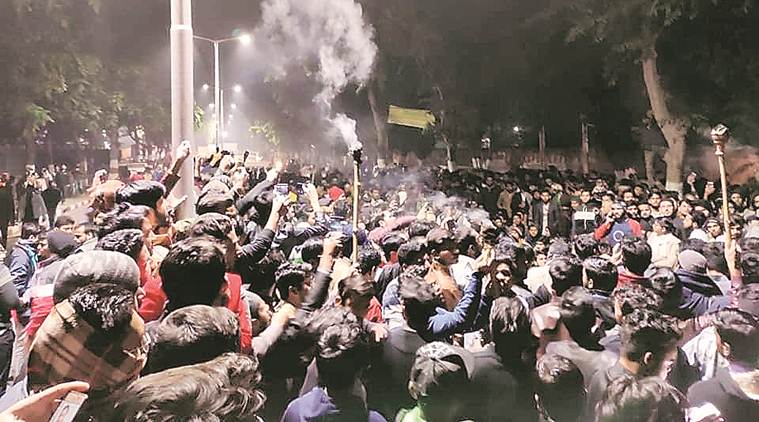 If there is any hope that the polarisation of India on grounds of religion will come to an end, that there will be a step forward in reducing caste-based discrimination, that hope lies only with the students of India. They are the conscience keepers of our society.

Growing up, I was in an environment where it was normal to engage with what is happening around us — politically and socially. I come from a family of freedom fighters, administrators and public servants. I attended an all girls’ boarding school, where we were taught to recognise gender discrimination and protest against it. While at Lady Shri Ram College, we often walked the streets holding candles and placards. Peaceful protest was considered part of everyday life.

When I joined the Mass Communication Research Centre (MCRC) at Jamia Millia Islamia, it was diverse in its range of students. In our batch of 20-odd students, there were people from the Northeast, Delhi, Bhopal, Chennai and Kolkata; people who spoke English, Hindi or Urdu and people whose first languages were neither. There were students of different faiths — Muslims, Christians, Hindus, Parsis, Sikhs.

It was a cacophony of people. We sang songs together, we did street plays together, we worked together on film projects, we went for film festivals together, we partied together, we ate biriyani together, we fought, we had love affairs. We went to the Nizamuddin Dargah often to listen to qawwalis. We roamed every corner of Delhi taking photographs and developing them in our college darkrooms. And every Ramzan was super special because an iftar was hosted every evening by somebody or the other. We discussed our ideological differences. We laughed often, we cried sometimes. It was a time like no other.

Jamia was a breath of fresh air. This was the most liberal corner in Delhi where we interacted with pioneering practitioners of theatre, puppetry, and art. And we were encouraged to think for ourselves. Protest was encouraged. In the first year of college, we went on strike, protesting against some faculty decisions, supporting our seniors in their fight. We sang songs of rebellion and refused to attend class. And it was considered normal.

India has a history of non-violent protest pioneered by Mahatma Gandhi. That’s how we understood protest. As rightful, and non-violent. But in today’s India, dissent is unacceptable. To protest means risking the wrath of authorities, risking bodily harm and even risking your life.

The idea of India as we knew it is changing so fast. Suddenly, there are people who are spewing venom towards minority communities, letting out their innate bigotry. Many of us are angry and bewildered at the monolithic Hindu-Hindi identity suddenly being thrust upon us.

My maternal grandparents migrated from Pakistan. I learned to read and write Urdu when I was young (it’s quite rusty now). I grew up listening to Punjabi, Maithili, English and Hindi. I grew up celebrating Eid and Christmas as well as going to gurudwaras. This is apart from visiting temples, of course. And I, personally, follow a school of Buddhist teachings.

When I see the identity of India being eroded by a manipulative, polarising realpolitik, I want to do something. But I am not really able to. For those of us on the other side of 35, our idealism long dead, protesting feels too difficult. We are too busy with our jobs and living our lives. At the most we engage in drawing room politics. Plus, we are plagued by fear. Is a protest worth it? What if we incur the wrath of the establishment? No point, we think to ourselves. So we sit quietly on the fence, putting our own comfort first. We lack courage.

But students have hope and passion and integrity. They are not jaded by life, their idealism burns bright. And so we have the bravehearts of Jamia and a thousand other students speaking a truth we find too inconvenient to speak. The students are brave enough to speak out, knowing they are risking their lives by doing so. That’s why the authorities are so scared of the voices of students.

We forget that the Emergency imposed by Indira Gandhi ended because of the massive student protests across the country. They fought to protect the values enshrined in the Constitution of India. And many of our current political leaders emerged through the student movements at that time.

It is clear that we are a nation being ruled by an authoritarian government. In a truly free and democratic country, can the police force actually storm into a public university and attack the students who are just going about their lives? The darkness, tear gas, the assaults, the broken bones, the lost eye. Who breaks into a girls hostel? Who breaks into a library? Attacking the student community is to attack the future of the country, it is to attack the conscience of the country.

If there is any hope that the polarisation of India on grounds of religion will come to an end, that there will be a step forward in reducing caste-based discrimination, that hope lies only with the students of India. They are the conscience keepers of our society.

In that sense, students who have the courage to protest against discriminatory laws and the authoritarian tactics of the government are the real patriots. They are the true citizens. They will always be the ones who give voice to the voiceless, who embrace diversity and thus protect the values enshrined in the Constitution. They are the hope for the future. Perhaps, the only hope.

This article first appeared in the print edition on December 19, 2019 under the title ‘The true citizens of India’. Shrivastava is a screenwriter and director who made the award-winning film, Lipstick Under my Burkha. She completed her post-graduation from Jamia Millia Islamia in 2003.