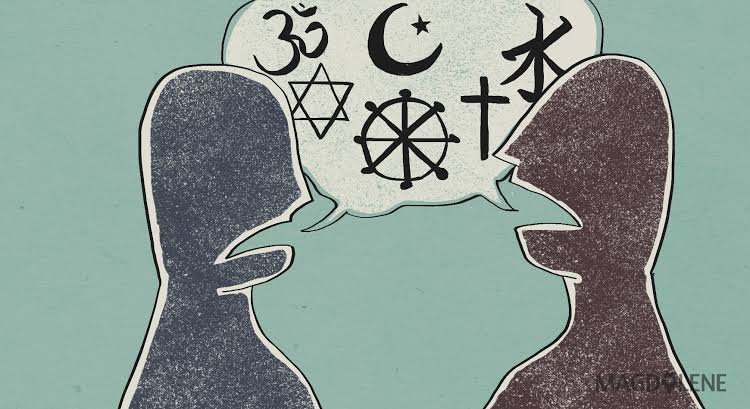 Being religious we have no right to humiliate other religions, individuals or ideologies. As a human being we are equal and belong to one family which calls us humanity or human being when we consider our ideas or teaching as an ultimate truth and displaying narrow mindedness against another religion or individual so we reach the low and mean level of humanity.

Europe remained dark in the name of religion and at the behest of the pope billions of people were beheaded or slaughtered. This blood game continued centuries, at last after this great bloodshed Europe took a momentous decision and kept aside religion from the business of the state, declared religion as a private matter for everyone and the state remained secular about religions. Due to this bloodshed Europe became the master of the world and included them in the first row of much advanced and developed countries of the world and now they are ruling in every field of life but we are on the cross road on the name of religion even in 21st  century.

We are a confused generation due to our less direct curriculum. We are developing a factor of narcissism among our generation through the subject of Pak study and Islamiat. Our religious pundit or state pundit both are playing their role to create fanatic donkeys instead of creative geniuses.

When we look at seminaries ‘ curriculum or school and colleges, both are on the same page and crushing the creativity of our generation. Creativity demands level ground and freedom of expression to nurture the high academic level but we are controlling our generation through indoctrination and developing one eyed generation who deprived of observation, research and awareness, they rely on readymade material and do not take pain to beyond the walls. When we teach our generation again and again that, (we are the chosen one and have a giant position in the world), how we can expect to born creative brain.

Abdul Slam, Abu Daud is the glaring examples of this mindset who torture a Hindu boy in Sindh because he belonged to a Hindu family. Abdul slam beat or slapped Mukaish and forced him to use abusive language against his Bhagwan and ordered him to call out ALLAH AKBER. Poor Mukaish was too compelled to accept this nonsensical demand because he belonged to a minority. Slam made the video of this heinous act and uploaded it on social media, Sindh police deserves tribute to catch the criminal and brought before the media, Slam confessed his obnoxious act before the media and demanded forgiveness for this act. Hopefully he will be released after accepting his forgiveness.

If we look at this picture in reverse order, if Mukaish committed the same blunder, can we give him a special concession? It is a big question but unfortunately we have no bright history related to these issues. We cherry pick and are prisoners of our past history and feel reluctant to go against our established ideas.

This hatred mindset does not create in vacuum. Our religious seminaries or further sects and branches are involved to spread this hatred mentality even students are trained to debate and teach them hatred in these seminaries. The curriculum of our schools and colleges are not different; it also gives nothing but a confusion of mind. This curriculum also teaches the concept of hero worship or narcissism as a proof please take the second year English grammar and read the English essay (My Hero in history) picture will be cleared that we are giving substandard material to our generation.

Narcissism and religious fanaticism is a great enemy of awareness and ends rationality. We should provide a level ground to express their genuine ideas and freedom of speech.  We will have to put a big full stop before this hatred mentality which calls them (kafir, zindiq, ahmadi and mulhid). We should tolerate those ones who think differently and use nontraditional ways to seek their own truth. We should have courage to accept other religious thoughts and ideologies and give space to one another.

In modern societies intelligent or creative people select nontraditional ways, become heroes to reject the set standard of society and our great tragedy is that we have already established our heroes and have no freedom to look beyond the roof.