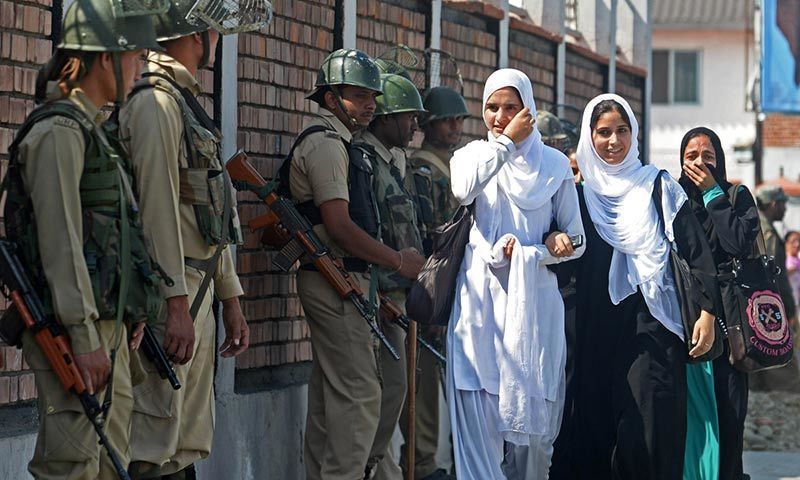 The division of subcontinent – considered as blunder to many on either side of the border – made many Muslims start to dream. They dreamt of an independent state where there will be no boundaries on their religious freedom, where they will be able to chop the cow without any fear of riots, where they will be able to have toilets within their home premises, and so on. Every Muslim who desired for the likewise, also strived to enter Pakistan. While many of them reached here, some could not make it happen. Kashmiri Muslims insisted to Pakistanize Kashmir instead of migrating to the newly born state. Nehru on the other hand, having some deep emotional attachments to the land of Kashmir, dealt the matter in an egoistic approach, being personal to Kashmir itself and to its affiliation with India. I smell vendetta at personal level whenever I go through Jinnah-Nehru involvement throughout the subcontinent history. I might be wrong, but facts like Nehru’s strong affiliation with Kashmir, Jinnah’s distasteful sentiments for Nehru, Nehru’s equally egoistic responsive emotions for Jinnah, collectively made the mess of Kashmir that could otherwise been resolved peacefully had some sanity been prevailed based on logic and zero personal feelings for each other. What’s gone is gone anyways.

There was a short-term endeavor back in the beginning, a limited battle where Tribal men proxied by Pakistan attacked Indian Maharaja’s Kashmir who in response signed the Instrument of Accession thus providing justification of counterattack, to India. Net result was Kashmir, united by Kashmiris, divided by Armies of India and Pakistan. India approached United Nations, receiving a plebiscite solution, demanding both armies to exit from the corresponding occupied Kashmiri lands as a prerequisite, something both parties accepted apparently but rejected deep within assuming the other army will take over the evacuated territory if they do so. The problem here, clearly as can be seen, is of trust. We don’t trust our neighbors for obvious reasons, and they don’t trust us back, for another set of obvious reasons. Both India and Pakistan will keep on handling (or manhandling) their part of Kashmiris. The question here arises, what should hold more value in importance matrix, Kashmir as a region or Kashmiri as a human?

Neither of the party seems to be serious on looking after their corresponding Kashmiri occupancy. Pakistani Kashmiris compared to their Indian counterparts are somewhat better for the fact that the situation is at least peaceful. Rest assured, we didn’t provide them facilities as equal as Islamabad. The situation, however, is debatable as we didn’t provide Rahim Yar Khan same living standard either. But at least they have peace, in addition to the necessities of life.

There is another fun fact here. We do desire for Indian Occupied Kashmir to be freed and added to ours but there is a considerable proportion of Kashmiris who believe in an entirely independent Kashmir, that is neither an “Atoot Ang” to India nor a “Shehrag” to Pakistan. I am not aware of any independent survey or statistical report that quantize opinion as such, however, there exist many bands of such Kashmiri folks who dream of an independent state. The question here, to the Pakistani mates is that, just in case there is a poll held and Kashmiris dominate Indian & Pakistani desires by overturning them both, will Pakistan accept an independent Kashmir ever? Same inquiry towards Indian friends, will India disassociate herself in favor of an Independent Kashmir?

I don’t think so!

And hence my dear friends, the fun fact turns into serious one by realizing that we are not raising our voices for their freedom. We just want to grab the piece of land we couldn’t earlier keep control of. In situation as such, do you really believe either party will ever let Kashmiris decide for their future by themselves? A negative nod, yet again.

Let me tell you about Kashmiris at my side of the border. Sister project of Dialogue Times, Mukaalma, had a former editor and she used to live in Azad Kashmir (PoK). She was and is happy not to be a resident of Indian Occupied Kashmir, however, she used to report internet and phone service disconnection every second day. There is only one organization, SCO, managed directly by Pakistan Army allowed to serve in the region to provide internet and mobile/phone services. We gifted freedom to our part of Kashmir but we never adapted seriousness to annihilate the justification of an independent state for Kashmiris at our end. The point here, is that yes we presented them better life than their Indian counterparts but since we didn’t gave them the same status as regular Pakistani, we cannot refer to them as traitors if the want Kashmir to be free from both India and Pakistan. It is their right, something both India and Pakistan are reluctant to give. I heard some talking about liberation movements in Balochistan, but to me that is entirely different subject as Balochistan has got no special status and is regular part of Pakistan. It is a constitutional treachery to liberate that area as there is no clause allowing demand as such.

India dropped the special status of Kashmir as per legislative change a few weeks earlier. It is an interesting fact that this measure has been taken right after Pakistani PM Imran Khan’s meeting with Donald Trump where Pakistan tried to escalate Kashmir issue. Trump offered his “services” to act as a mediator between India & Pakistan, something that was coldly rejected by India. India pitches Kashmir as its Integral Part (Atoot Ang) since long. The recent most legislative modifications made this technically in compliance to their pitch. Officially, India has simply rejected to consider Kashmir issue as an ‘issue’ at all. Any Indian citizen will be able to procure Kashmiri land and serve in the region post the recent most amendment. There’s a fear among local masses that there will be a strategy appearing soon to shrink Kashmiri hold in exact manner as that in Palestine.

Regardless of any doubts or fears anywhere, it is bitter truth that human beings in Indian occupied Kashmir are going through terrible times these days. Regardless of conceptual terminologies like “Atoot Ang” and “Shehrag”, every inch of Kashmir direly needs peace. The chance of proper war has diminished after acquiring nuclear power status by both nations (as they say with great power comes great responsibilities). Those advising Pakistan for a regular war are not aware of devastation it brings along with it. Secondly, circles as such are unaware of the fact that both India and Pakistan will avoid any serious skirmish. In other words, India will keep on exercising its control over Kashmir they possess just like Pakistan will never agree to an independent Kashmir or to give up the part under own control.

In factual situation as such, what stops us to advocate any action that brings Kashmiris in Indian possession a step closer towards permanent peace, no matter what constitutional amendment it is wrapped in?

The root cause of feuds and sick relations with India is Kashmir issue. What bad will it bring if elected governments in both countries agree to reject Kashmir as an issue at all? Will it not bring good to Kashmiris? Let Kashmiris in Indian occupied Kashmir be a regular part of India if there comes eminent peace after this. Ask any Indian Muslim how Indian he is, and you will figure out a devoted Indian citizen with hopes and wishes for peace across India, despite of desiring Pakistan to loose in an Indo-Pak cricket classic. Sentences like “Kashmir ki Azadi tk Udhar band hai” (We do not accept lending till Kashmir’s independence” clearly indicates that we are well aware of Kashmir’s fate. Let us stop insisting for Indian occupied Kashmir’s possession and raise our voices purely for basic human rights, prevailing peace in IoK. Let us squeeze our fiscal expense on defense and let us utilize the same on betterment of humanity in both sides of Kashmir.

The resolution of Kashmir issue that we desire as Pakistanis can never be implemented, neither with peace nor by a war. Why don’t we accept corresponding Kashmiris as regular citizens of our country and share with them equal rights? These are critical questions, however, we will have to drop the ideas of Ghazva-e-Hind” and other alike Jihadi concepts in order to have an open minded debate on such questions. We must address this taboo. We must understand that basic human rights are more critical then insisting on “Atoot Ang” or “Shehrag”. Think of it, at least once, putting yourself in Kashmiri shoes.