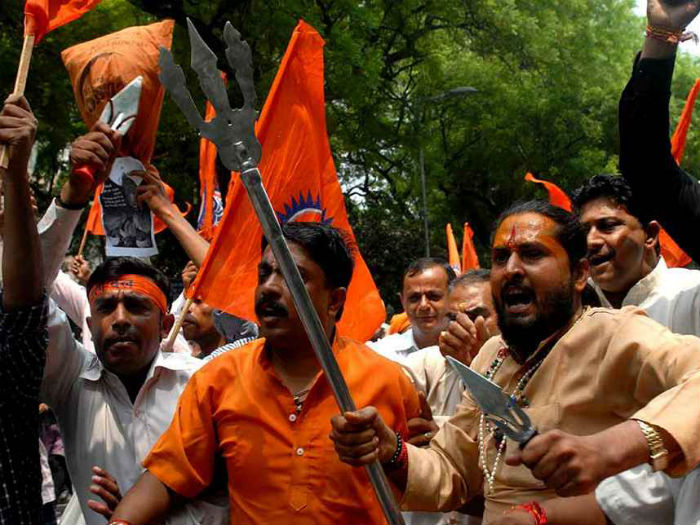 Hinduism is the 3rd largest religion in the world after Christianity and Islam.  But it is not demographically as widely spread on the world’s map as the first two.  Hindus and Christians tend to live in countries where they are in the majority whereas Muslims infiltrate other societies and then try to change the whole demography of the region in a few centuries by violence, migration and high fertility rates. As an example the %age of Muslims in the Western countries is France 7%, Germany 3.4%, USA 4%, Australia 2%, UK 2.7% (which is entirely almost due to migration) and in Russia Muslims make up 18% and in China 11% of their population, due to the areas which these empires encompass, historically.

In the coming decades, India will have the distinction of having the largest populations of Muslims and Hindus. according to religious projections data. In 2050, Indian Hindu population would be 1.3 Billion and there would be 311 million Muslims (11% of the global total), making it the country with the largest population of Muslims in the world, surpassing  Indonesia which currently  has the world’s largest number of Muslims. This is a point to ponder.  It is going to give rise to more of social unrest and communal violence, given the likelihood that the Muslim share in higher education, jobs and services does not increase proportionately. 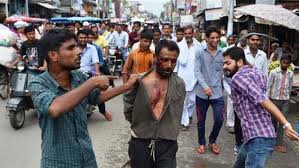 By contrast, In Saudi Arabia, no faith other than Islam is permitted to be practiced, no churches, temples, or other non-Muslim houses of worship are permitted in Saudi Arabia although there are nearly a million Christians as well as Hindus and Buddhists there as foreign workers. You are not allowed to bring Bible with you to the country. Books are examined and confiscated at the airports. Foreign workers are not allowed to celebrate Christmas or Easter. Proselytizing by non-Muslims is illegal and conversion by Muslims to another religion (apostasy) carries the death penalty. Religious inequality extends to compensation awards in court cases. Once fault is determined, a Muslim receives all of the amount of compensation determined, a Jew or Christian half, and all others a sixteenth. Saudi Arabia has officially identified atheists as terrorists. And Muslims in India are immune that in-spite of being home to the 95% of Hindus, it is a secular democracy.

India is encircled by fanatic brand of Islam. The countries Pakistan and Bangladesh contain about 19% of Muslims population and adding the in-house number, means that 30% of the Muslim population. Have you ever wondered why the Indian sub-continent is so important for the Saudi imperialism and why Wahabi’s are investing so heavily in this region. Statistics are interesting. Imagine that over 30% of the Muslim population lives in India, Pakistan and Bangladesh, almost in 3 equal parts. Add Indonesia with 13% and Turkey with close to 4.5 so have 50% of the Muslims in this region. Saudis themselves are just 1.6% of the total Muslims in the world. Twice as much live in Europe than in the Saudi Arabia. Africa and ME has 35% of the total.

This is the old Arab slave trade in a new garb. Sub-continent makes 33% of the Arabian slaves. Imperialism needs blood to sustain its control and blackmail the whole world. Who would go to these filthy Arabs if it is not for reverence of the religious tourism yielding them $18 Billion in 2016 in direct revenues only. Oil may dry up but slavery must live on.

The partition of the sub-continent by the British was the event which sealed the fate of the subcontinent for the next century. The forefathers of India knew, secularism is the way to govern such a mammoth and diverse land.  It was never accepted by all of the population. From the very beginning there was a hard core of Hindu nationalists who maintained that India should be a Hindu country. They made their presence felt most dramatically when one of their members assassinated Mohandas Gandhi in 1948. But

beyond the nationalists, there are literally tens of millions of Indians who never bought into the idea of secularism. The British journalist and author Mark Tully summed up the issue in these terms: “The elite’s so-called secularism inevitably degenerates into disrespect for religion. But the vast majority of Indians, who do not enjoy the benefits of modernity, still believe that religion is one of the most — if not the most — important factor in their lives.” In other words, for the Indian masses living in abject poverty, religion is the sole source of comfort and hope. For them, secularism is an unappealing and alien concept.

It is true that thousands of Muslims and Christians have died at the hands of Hindu mobs. The nationalists routinely accuse Muslim men of conducting a “love jihad” whereby they seduce Hindu women, marry them and convert them to Islam. Who can forget the Ayodhya riots?

The BJP has won a resounding victory in the Utter Pardesh state elections, India’s most populous state, numbering 220 million people (more than the combined populations of Germany, France and Britain or the whole of Pakistan). Modi’s choice of chief minister is quite surprising. He conferred this office on a Hindu priest, known for championing reactionary Hindu causes and for being rabidly anti-Muslim.

During his first few weeks in office, Adityanath has shut down butcher shops suspected of handling beef and set up a special squad to hunt down “love jihadists” and other non-Hindu predators. He claims that Hindus are forced to flee persecution at the hands of Muslims. On his website, he calls for the destruction of all Muslims and Christians in neighbouring Nepal on the grounds that they pose a threat to Nepal as a Hindu nation and a threat to the security of India (Muslims and Christians make up less than 6% of Nepal’s population). How far this Hindu nationalist will go or be allowed to go is still uncertain.

Although India is not a religiously reactionary state like Saudi Arabia or Iran. It is rather facing its own threats from Pakistan backed Islamist militants in Kashmir, as well as Islamist terrorist attacks throughout the country. The rise of ultra right and nationalism in India is not entirely misplaced and to an extent justifiable when they can see that 10,000 years civilisation is being trampled by the off-springs of militant invaders who now have the global demographic edge and they take advantage of democracy, humanism and secularism whenever and wherever they can, be that in India or Europe.

But the demography of the subcontinent dictate us that if we are to take a lesson from history, the leaders in the subcontinent should join hands to fight extremism, militancy, Saudi insurgency, Mullahism. Pakistan and India can’t survive without giving each-other MFN status and opening the doors, easing out borders, student exchange programs, more trade and cooperation and giving Kashmir and other disputed areas including Balochistan, Sindh greater economic and political autonomy. Only peace can bring about the real change in the lives of almost a quarter of the world population.

Murder of a Liberal Voice: Gauri Lankesh by ASHRAF LONE