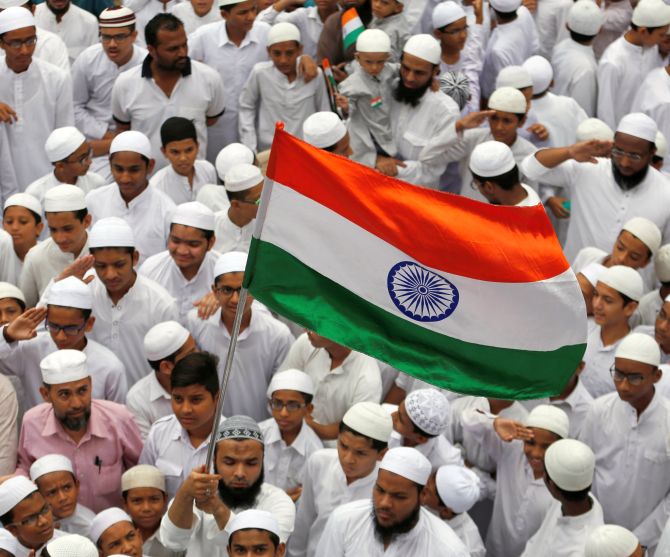 India is a country with diverse religions and cultures. Here persons of different faiths have lived in brotherhood and communal harmony since centuries. Muslims take part in Hindu festivals and Hindus take part in Muslim festivals. During my studies at JNU, New Delhi, I  enjoyed  this brotherhood. JNU is a university where a hindu is allowed to offer Durga Pooja and celebrate other festivals but at the same time Muslims also enjoy this kind of freedom to celebrate their festivals as well. We usually used to pray our traaweeh prayers(Special Night Prayers of the month of Ramzan) during the month of Ramzan in a hostel and I don’t remember wether at any point of time we were denied the permission for these. Muslims from all states of India used to offer prayers in a single hostel. During these prayers and on Eid festival we interacted with each other with ease and this helped us to understand the culture of others. On the festival of Eid we invited non-muslim friends and on Divali and other festivals of Hindu friends, we were getting invitation. We enjoyed every movement of this coexistence and brotherhood. Although we differed on some issues, but we always respected each other’s views. But India is in a grip of religious extremism from last few years. JNU has also felt the brunt of this extremism.  Everyother week or month , new rules are made to suite the ill agenda of ruling regime. JNU’s has been robbed of its autonomy and its reputation of being a model for pluralism and secularism has got badly damaged.

From last few years India is in a grip of religious extremism. Killing in the name of faith has become order of the day. Writers who speak about this hate and lynch politics are silenced by bullets. Guari Lankesh is a recent example  who fell to this jingoism. Earlier Kalburgi, Pansare, Dabholkar and other activists also fell to this hatred. Minorities especially muslims are not feeling safe and secure and they have been subjugated and terrorized. Killing after killing is killing the idea of plural and democratic India. Killing of Akhlaq , Junaid and Pehlu Khan is a reminder that India is not moving in the right direction and democracy in India is in a grave danger.

There are about 25 crore muslims living in India. After the Independence of India and subsequently Partition, muslims who chose to remain in india have played a constructive role in India’s building as a developing nation. They have produced civil servants, doctors, academicians , educationist of highest caliber. But the problem which they have faced is the communal riots perpetrated on the behest of politician to meet their nefarious ends. Even after so many communal riots and Babri Masjid demolition by Hindutva fanatics, muslims of India have still shown a great regard for Indian democracy. They have shown tremendous faith in Indian Judiciary even after sometimes judiciary has betrayed them. Indian muslims never chose the vilolent path to put their demands before the government. This determination and faithfulness should be respected and recognized at every level.

India is not a country of one faith like any  European country , rather it is a country of hundreds of faiths and sects and it has been like this since centuries. People have co-existed here from time immemorial. They have been respecting and participating in each others’ festivals. So to turn it into a monolithic religious entity is nothing but a wasteful and dangerous exercise. Extremism breeds when you think that a country of different faiths  only belongs to single faith and people of other faiths are outsiders. To turn a pluralistic country like India in a monolithic entity  can simply lead to jingoism and state sponsored terrorism. Gau Rakhaks who kill in the name of cow is a bright example of this jingoism and fake nationalism. A person is simply killed on the pretext of having a beef on any other superficial pretext. Dalits are being harassed just because they side with the muslims and demand their rights which have been denied to them from centuries. Writers are being killed because they use their pen to bring the issues and atrocities on muslims and other marginalized communities to open. Journalist are getting threatened and killed because they speak for the poor, oppressed and voiceless.

Jammu and Kashmir is another issue, to which Indian government has to look from the humanitarian and political prespective. Armed uprising against Indian rule and for  independence in Kashmir is going on from 1989 which have affected every strata of society. Almost one lac killings have  taken place and thousands of people have disappeared at the hands of forces. Mass graves have been found. From last 8 years unarmed mass-uprisings and civilian protests against injustice and oppression are happening  with no end to it in near future. Unarmed civilian  have been dealt with bullets and pellets which have rendered thousand of people including children,women, young and old blind. Hundreds of civilians mostly young have got killed in these uprisings. The justice has been denied to the victims. Human rights violations have to be stopped. To be a true democracy Indian government has to offer justice to victims of Kashmir and has to go for unconditional dialogue which should include all stake holders to put an end to this blood bath and settle this issue once and for all.

Indian as a democratic and developing country cant ignore these grave issues. Farmer suicide issues and the issue of unemployment, rural poverty and caste discrimination need more attention than before. Indian government cant simply wash these issues aside. A true democracy doesn’t believe in hate and lynch politics. People can not be devided on religious lines and vote bank politics has to be shunned. Masses cant be deceived too much on “surgical strikes” carried on neighbours. To develop into a good society and emerging power, India needs to solve all the issues including long pending issue of Jammu and Kashmir through dialogue. But this needs political will. Is Indian political class ready to learn from its mistakes and to give respect to  every citicizen of every faith, only time will tell.

Nouman Ali Khan Scandal and my Dismay by Humera Gul