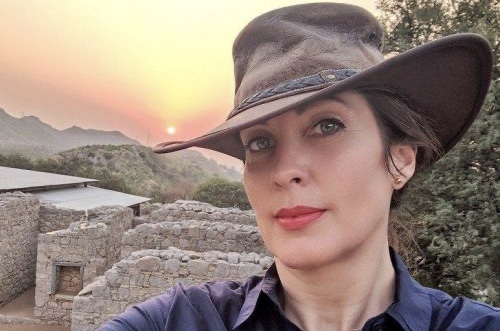 She is one of several self-styled ‘Gora Pakistanis’ who praise Pakistan on social media while enjoying Pakistani hospitality though she goes farther than most in supporting the current ruling party (PTI), abusing its opponents, defending the Pakistan army, and attacking its critics.

Ritchie is supposed to be a ‘social media influencer.’ But she is not published outside Pakistan, her film on Pakistan has been seen mainly by Pakistanis, and her social media following is also largely among those Pakistanis who feel good at seeing a white skinned person praising their country.

It makes one wonder who she is influencing.

There have been rumors that ‘Cynthia Baji,’ as she is known to her supporters, or ‘Ritchie, the Bitchie,’ as she has been nicknamed by those she routinely abuses and attacks, enjoys the support of ISPR or other powerful quarters in the country. Cynthia herself brags about he connections to the security establishment in her social media posts.

Cynthia Ricthie has cultivated an image in Pakistan of being an American who supports Pakistan. But there is no evidence that she has done anything to support Pakistan in America. She has never testified before Congress, written an oped in a U.S. newspaper, or appeared on U.S. television. Nor has she registered in the U.S. under law as a lobbyist for Pakistan.

In an article on a Pakistani website, Cynthia Ritchie “describes herself as a global citizen” and claims that “her childhood desire to be Indiana Jones led her to Pakistan and the love for [Pakistan’s] people keeps bringing her back.” India Jones, as we know, was a fictional adventurer and professor of archaeology, not a self-proclaimed media consultant with no post-graduate education.

Moreover, nobody knows how Cynthia Ritchie pays for her lifestyle, her residence in Islamabad’s posh E-7 neighborhood where nuclear scientist Dr. A.Q. Khan once lived, her travel, or the boozy parties that attract powerful members of Rawalpindi-Islamabad society.

If someone in the Pakistan government or armed forces is paying her to praise Pakistan to Pakistanis, that is a waste of Pakistan’s meager resources.

Moreover, those who have watched the Netflix series ‘The Spy’ would notice the similarity in the conduct of Cynthia Ritchie and the show’s chief character, the real life Israeli spy, Eli Cohen.

Cohen arrived in Damascus, Syria in 1961, pretending to be of Syrian origin and to love Syria. He praised the Baath Party and cultivated ties with senior military officials. He even became a confidante and adviser to the Defense Minister. In 1965, he was discovered as a spy while transmitting intelligence to Israel by wireless.

By the time he was discovered, Eli Cohen had done much damage to Syria. His ‘affectionate’ and seemingly harmless gestures contributed to Syria’s military defeat in the 1967 Arab-Israeli war. Cohen’s most famous achievement was the tour of the Golan Heights in which he collected intelligence on the Syrian fortifications there.

‘The Spy’ ostensibly pretended to sympathize with soldiers exposed to the sun, and helped plant trees at different positions, supposedly to provide shade. During the 1967 war, the Israeli army used the trees as targeting markers for their artillery. This resulted in Israel being able to capture the Golan Heights in two days.

It is interesting to note that all the so-called ‘Gora Pakistanis’ who shower praise on Pakistan to win access and influence in Pakistan started showing up after the U.S. raid on Abbottabad targeting Osama bin Laden. Is that just a coincidence or did someone discover a new technique for embedding intelligence gatherers in a Pakistan that had become more security conscious?

Praise is a deadly weapon and foreign intelligence services must have noticed the Pakistani desire for international praise and ‘positive image of Pakistan.’ Have they exploited it by sending the likes of Cynthia Ritchie, who became known only after their arrival in Pakistan? Spies usually have simple back stories and their background is always mired in secrecy.

According to an earlier article on New-Pakistan, “There used to be a website www.cynthiaritchie.com, which had her biography but it has been disabled since New-Pakistan raised questions about her qualifications.” Now that website is only password accessible –hardly how eputable international media consultants operate.

When her bio was accessible, Ritchie claimed that she had made “ TV commercials for AT&T, Political Campaigns, HGTV” but did not explain what political campaigns she worked on or what she did on HGTV—”an American basic cable and satellite television channel,” which primarily broadcasts reality programming related to home improvement and real estate.”

It is clear that Cynthia Ritchie is, at least, a charlatan, and possibly an individual who might pose a threat to Pakistan’s national security by living in Pakistan and embedding herself in Pakistan’s ruling party and the military officers’ corps.

A person with no security clearance and an unexplained past shows up on stage with known propagandists for Lashkar-e-Taiba and attends parties with the rich and famous as well as the influential and powerful.

Do not be surprised when an India-American operation targets Dawood Ibrahim or Hafiz Saeed the night after Cynthia Ritchie boards her final flight out of Islamabad.

Logic of Politics and Governance in Punjab by ASAD UR REHMAN

Kashmir Caged; A Report From the Ground Jean/Kavita/Maimoona