When I chatted on Skype with a friend in Pakistan he lifted his cat greeting me with its sweet face. I was touched by the rosy nose and asked my friend if it was a she or a he cat. As soon as he told me it was a tomcat it jumped down happy to be released.

Knowing well that in Pakistan most people do not care much about health and wellbeing of animals, even not of their pets, I suggested my friend to get the cat sterilized by the vet to avoid increase of kitten since his cat was free-roaming. I offered him to pay the fees in case he could not afford the money.

He never replied and I was not sure if he would accept money from a German citizen, so the matter passed out of mind. Up to this day I do not know what happened to the cat, but what I know is that my friend had still more cats one of which at least died due to severe illness. He also got a dog from a friend and he assured me that his children would care for it in a loving way.

Now it is quite doubtful what does he mean by “care”? Stroking the pet once a day? Give it food and water? Take it for a walk once a day? Supposed his children do nothing more than that, I bet the dog will fall ill or will even die as happened to the cat evidentially. Caring for a pet means much more: It means

tenderness, watchfulness, grooming the coat, cleaning the sleeping place and the feeding dish; giving the right food as for example no leftover food to the dog and no milk to cats (most cats are lactose intolerant, like many humans. This means that they don’t have the enzymes needed to digest the lactose in milk. Lactose is a type of sugar found in milk. When cats drink cow’s milk, they can end up with painful stomach cramps and diarrhea), and first of all consulting the vet as soon as there is the slightest sign of disposition haunting the pet.

Generally nobody cares about sterilizing outdoor-cats; whereas everybody is lamenting about the huge amount of street-cats in Pakistan. The tie-in of breeding, i.e. copulation of free-running pets as well as street-animals with increasing offspring seems to be unknown among a lot of citizens. Or maybe they just don’t care thinking it easier to kill the offspring of street animals than to get the mature animals sterilized.

This is recklessly disregarding the dignity of animals in the highest degree to say the least.

I remember very well the cruel treatment of animals like horses, dogs, dancing bears and chickens when I lived in Pakistan for about two years. Once I experienced the hard caning of a horse by a Tangay Wala. Beating the poor soul again and again on the chest the horse reared up high out of pain without hurting the Wala in the least. I was to go to him and ask him why he was beating his horse, but did not dare since he appeared very furious and in his rage he could have lifted the stick against me.

Nowadays living in Germany again I hardly miss a day without subscribing petitions against animal cruelty (not forgetting petitions against human cruelty of course) in the internet being well aware of the animal cruelty happening in Germany/Europe as well, albeit secretly in animal experimental laboratories and in masses animal factory farms. Due to the development of Media effective technology 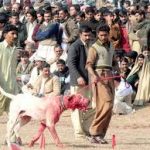 there are so many possibilities of researching whatever is convenient, as for example animal sanctuaries. I was pleasantly surprised to find a few shelters for old and worn out animals in Pakistan, which is a great progress compared with the 60s when I was living there. Unfortunately there are no active organizations working in this field as my Pakistan friend Anees told me recently. Another friend wrote: “In Pakistan, there are many organizations working for ‘Animals Rights’, but there are none among them truly working for ALL the animals’ welfare and rights in its true essence.”

Concerning the slaughter of animals for food and the religious sacrifices of animals I found a specification (in extracts) by a group of students working on the improvement of animal care as follows: “…According to an estimated data, somewhat six million animals are murdered every hour for food, which excludes the figures of those killed for any so called religious sacrifices…”.

My very dear friend Sultan told me concerning the killing of sacrifice-animals on religious feasts like Eid-al-Adha that “Animal Farmers are feeding goats and cows with almonds and milk and apples and selling them for millions while a majority of families are living below the poverty line.”

Referring to the slaughter of sacrifice animals I think there is an “awake from a deep slumber” to put it in a poetic term. Many have realized that Allah in his mercy did not mean millions of sheep, goats and cows being sacrificed, when He tested Abraham’s obedience by ordering him to kill his own son.

If one opens the Quran at verse 37:102-111 to read the ACTUAL story the interpretation turns out to be rather different:

“It is time to believe GOD instead of believing the man-made or man-corrupted books”:

In addition to this beautifully and clearly written comment in the

’There are quite a lot of individuals in the Muslim world who either refuse to participate in this ritual or speaking up and asking for an end to animal sacrifice. Some are notable animal advocates such as Amira Hassan from Tunisia, Seçil Aracı from Turkey and Amina Abaza the founder of the Society for Protecting the Rights of Animals in Egypt. And it isn’t just animal advocates who wish to see an end to this ritual. It is average Muslims who are re-evaluating if this ritual is actually part of the tradition of compassion and mercy as espoused by the Quran and the living example of the Prophet Muhammad’,

the reader furthermore will be surprised that vegetarians and vegans have increased rapidly in Pakistan. A vegan living friend researched that at least 1-2% are vegetarian/vegan living people up to now! And it’s growing.

I also found out that in the Quran is written

“There is no man who kills [even] a sparrow or anything smaller, without its deserving it, but God will question him about it [on the judgment day]” and “Whoever is kind to the creatures of God is kind to himself.”

A very astonishing account in the Qur’an’s sura an-Naml of Sulaymaan (Solomon) talking to ants and birds makes me smile wet with tears and I would like to cite it finally, begging all meat eaters in Pakistan to reflect about and try to be kind to animals in whatever way:

“And gathered for Solomon were his soldiers of the jinn and men and birds, and they were [marching] in rows. Until, when they came upon the valley of the ants, an ant said, “O ants, enter your dwellings that you not be crushed by Solomon and his soldiers while they perceive not.” So [Solomon] smiled, amused at her speech, and said, “My Lord, enable me to be grateful for Your favor which You have bestowed upon me and upon my parents and to do righteousness of which You approve. And admit me by Your mercy into [the ranks of] Your righteous servants.” (27:17-19)“.

HILDE-HABIBA JACOBS IS A WRITER AND HUMAN RIGHTS ACTIVIST BASED IN GERMANY.