Journalism is considered to be as one of the difficult profession in the all over the world as journalist present their point of view or analysis on neutral basis. Sometimes, they get threats on writing truth and sometimes they highlight crime via sting operations keeping their lives in danger. In short, we can say that a journalist’s life is full of danger especially in under-developed countries like Pakistan.

After disqualification, Nawaz Sharif decided to show his political power via Grand Trunk road rally to Lahore from Islamabad. The topic is not to discuss that whether Nawaz Sharif is right or wrong. 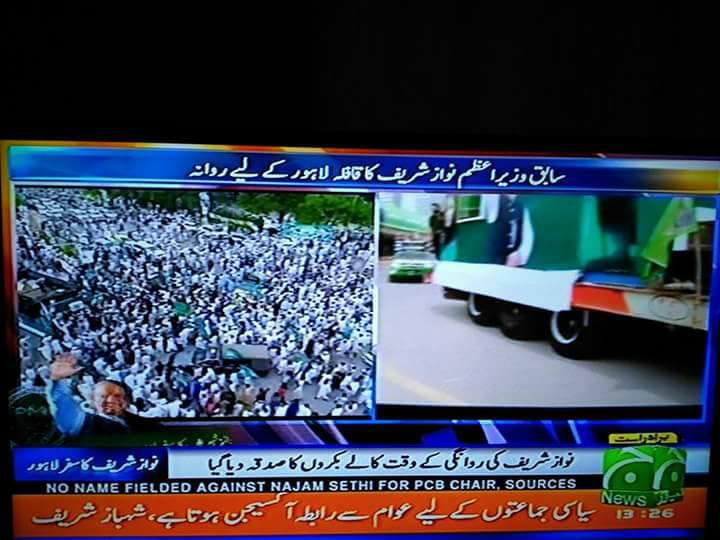 Discussion on Yellow journalism of Pakistan is my topic. Isn’t there any rules and regulations for Journalism? The duty of journalists is to provide news on true facts and and figures but sorry to say our journalists show politeness to a relative party which is actually not the calibre of journalism.

As an example, I will link reporting of two reputed media channels of Pakistan. “Geo News” was reporting that there were thousands of people in the rally while “Bol news” was reporting that there is no one in the rally except the ministers. These two different news of two different media channels try to make us understand that every media group is linked with a relative political party in Pakistan.

As Pakistan was consistently suffering with sectarian war. Mullah kept us away from the ground realities by indulging us in sectarianism. The way people of Pakistan are indulged in sectarianism, in the same way our media group are biased towards a relative political party. This should not be the standard of journalism.

To whom we complain about this biased journalism? PEMRA, the governing body or Regulator, is merely a puppet of sitting Government. The two simple reasons which I can guess about such journalism are, ‘considering journalism as a business of speed money because Mir Shakeel ur Rehman himself said that he is a businessman’ and the second reason which is quite valid and interesting that ‘our media is not as mature as Western media or even Indian media because our media got independence not long ago and its still trying to adopt the media mannerism.

Our government made some serious steps to supervise the unethical activities happening in some Maddrasa’s according to the National Action Plan. Similarly, the responsible should also take some serious measures to resolve such type of biased journalism. For the sake of money, journalists of Pakistan not only disgracing their profession in front of Pakistanis , they are also disgracing their homeland and showing the flaws to the whole world by such type of reporting.