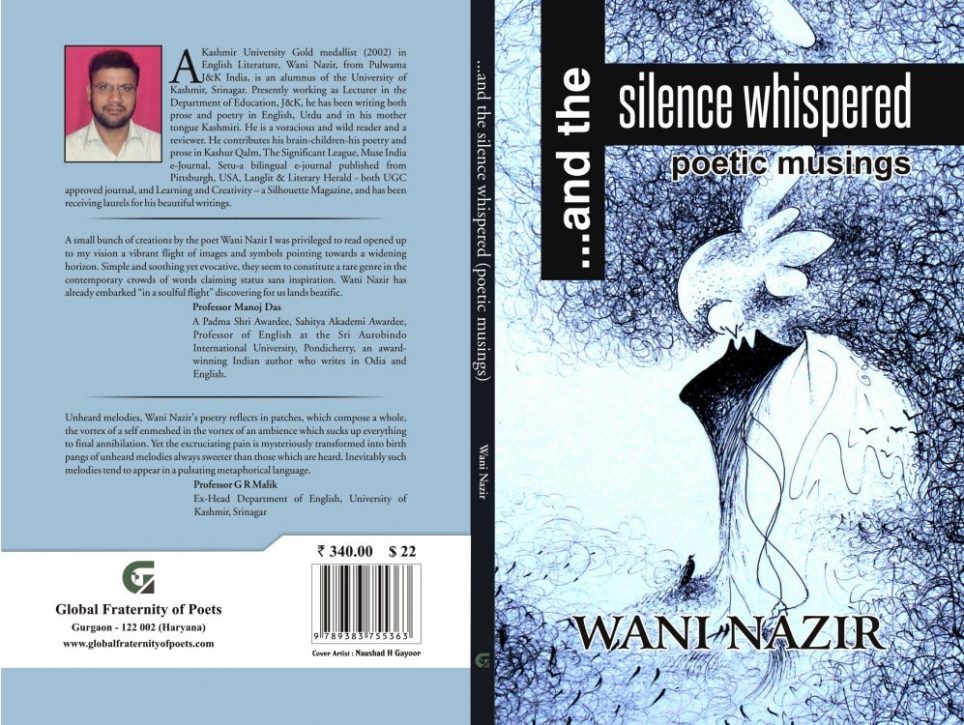 Whenever in isolation, the rhythmic tunes of ones heart coincide with the tunes of poetry one is reading, the languages fail to paint the impressions so received in black and white. The reader in such situations is restricted to just Ah’s and Wah’s. Of course, such moments are very much rare but in case of …. and the silence whispered” by Wani Nazir, you lose the count of moments. While journeying through the poetic musings the book is titivated with, the reader is lost in traversing the contours of nakedness of the inner recesses of the poet, and the feelings of overcoming his own dark labyrinths come to the fore.

“How the DNA has kept alive
Within me all who are now no more
Discernable to my eyes nor do I
Hear the voices that would fill
The air, and the ears of their fellow beings!” (I Shall Never Die)

After foraying into this poetic musings (103 poems), I found Wani Nazir a poet, nay a literary artist. The fact can be ascertained not only by his beauty of style and technique but through his untiring efforts of experimenting to adopt /invent newer and still newer poetic styles. It is as a result of this that most of the poems are strikingly different from one another. This trait has led him to success to the greater extent in making his poems a treasure trove to serve the purpose of carrying the ideas forward. Without any exaggeration, it can be said that the way he packs his fresh idea in a particular style seems to suit it best. He is often seen taking liberties with style and at times sacrifices it for the sake of retaining the sense and integrity of thought and idea. And then introducing the characters and concepts of mythology in his verses is simply unparalleled.

The reader finds himself a permanent audience while the divine solace is staged in the skillful versification revolving round the intricacies of different aspects of life. In jubilation, like that Chinese who after watching Hamlet’ said: “I am hamlet! I am hamlet!” the reader feels to have inherited all the traits of the artist and is all set to paint the canvas of his mind in the hues he has seen through eyes and felt deeply in his heart.
It is the poet, Ay! It is the poet
Who can harbour rays of hope
In the parched hearts of all the forlorn,
And can illuminate a golden dawn” (Poet: The Redeemer)

The exquisiteness of poetry is in effortless flow of words like the singing waters of the brooks cascading down the mountains. And you love the meandering of thoughts in harmony with the environs. Wani Nazir’s poetry is in congruence to such effortless flow without compromising on thought. W H Audens remarks that “the poet marries the language and out of this marriage the poem is born” are true when it comes to use of language and diction by Wani Nazir in his poems.
“Look! I still imperially implore you
To hear every line
Of the voluminous book of my silence,
From cover to cover,
And take note of my yearnings
Every word of this book is fraught with,
Lest you should regret
The loss of your senses all! ” (Beware! O World)
In general poetry is in itself a vast universe. And to encompass the holistic perspective of this universe is next to impossible without dividing into the realms beyond time and space. Wani Nazir too cruises his imagination out of the spatio-temporal limits and reaches all and belongs to all without ceasing to exist to his time and space. In my opinion, the poet has succeed to the larger extent to introduce with subtlety some of such transcendental and spaceless realms in this volume through free verse format poetry, Tanka strings, Decastiches, Memory and Saqi series.
While going through the free verse open format poetry, the reader can sense quite clearly the attachment of the poet to the metaphysical world. How artfully the brush of metaphysics has overpowered the canvas of physical world is strikingly alive between the lines! The verses themselves establish an accord between the reader and the metaphysical world and in this journey none can return without tasting from a cup of such world.
“A drop of rain,
In deep meditation,
I discerned
On a white petal (Mystic Musing)

Tanka strings, Decastiches and Saqi series on one hand bear testimony to the fact that each fibre of the being of the poet is poetic and well versed with poetic world and on other hand his mastery in carrying an ocean in a drop is remarkably brilliant.
Being the citizen of one of the world’s conflict-ridden place, how come is it possible that a canvas of such sensitive artist be uninfluenced? The wails and sobs diffusing day in day out in the air we breathe in; the land we call paradise, the waters we name elixir, the humans we tag humane and the system we are a part are unfortunately in deformed and deranged contours. How conflict has rotten us and paralyzed our social acumen is more or less reflected in free verse, Tanka and Decastiches.

What can a blood-drenched pen write? Save pain, pangs, and elegies for the oppressed. How can he eulogize the spring When it too gushes out blood. (Poet: The Redeemer)

My waste land breeds
Harvest of blood-drenched phantoms
Out of the dead soil;
And haunt the fretful bosom
Of the bleak ambience whole. (From Tanka String)

All in all, Wani Nazirs debut collection of poems makes the reader acquainted with the deeper, both named and unnamed feelings which constitute the substratum of our beings which we seldom peep into. and the silence whispered has a potential to be read again and again in times to come.