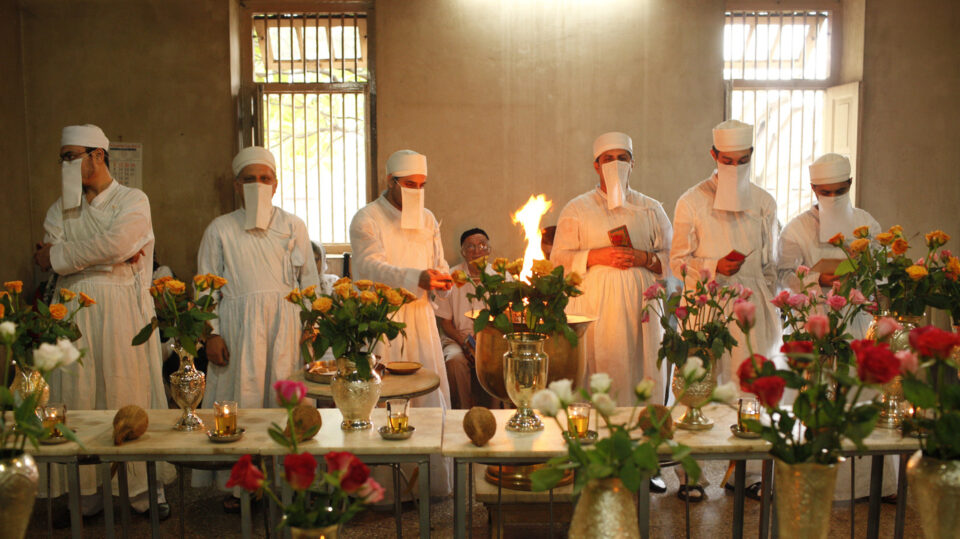 Zoroastrian priests pray to honor the dead inside a temple in Pune, India, on Aug. 18, 2010. Each of the dead is represented by a vase filled with flowers. Parsis forbid images of their funeral ceremonies, where the deceased are taken to the Tower of Silence and consumed by vultures and other birds of prey. NPR

In an article for The News, Arshad Yousafzai quotes, “Dr Minwalla said that in the next two decades there will be no Parsi anywhere in Pakistan, as almost the entire younger generation of the community has gone abroad with no plans to return.” Dilaria Dubash in the same article says that, “…Zoroastrians can’t be confined to any state. “We have been wandering ever since we were forced to flee Persia. For Pakistan, saving its Zoroastrian population is a lost cause now. If an awareness program would have been initiated two decades ago, maybe there would have been some hope.” Writer Akhtar Balouch said in the same article that “no one can become a Parsi, because it’s an ethnic identity. “A person can accept Zoroastrianism, but they will never be a bona fide Parsi.”

Confronted with such statements of doom, one does not have to stretch ones imagination too far to understand the plight of the Parsi community not just in Pakistan but all over the world. As of 2019, it has been estimated that there are 100,000 to 200,000 Zoroastrians worldwide, with around 60,000 Parsis in India and 1,400 in Pakistan. A 2012 study featured in the FEZANA Journal, a quarterly publication of the Federation of Zoroastrian Associations of North America (FEZANA), published a demographic picture of Zoroastrians around the world and a comparison with a similar study done in 2004. The study gives a global estimate of 111,691-121,962 Zoroastrians (Wikipedia).

Both India and Pakistan are not the type of communities where minorities feel safe. Every other day the extremist right groups in India are up in arms against Muslims and in Pakistan a state of constant civil war remains against religious minorities like the Shias, Ahmadiyyahs and Christians. Parsis have always been wanderers and a scattered group of people. Since they were forced to flee from Persia, they have settled in India, Pakistan, and now all over the world.

An American Brat by Bapsi Sidhwa and Such a Long Journey by Rohinton Mistry are excellent examples for me to explore. Both these novels have portrayed the lives of the Parsi community in Pakistan and India respectively. This sets a rich plain of contrasts for me to explore the differences between the past and the present, as well as the situation of this minority in the neighboring countries. It would also be interesting to note how the male and female perspective of the authors and the protagonists differ or show similarity of experience. Following the plots of the novels will also reveal how these individual and communal stories make the reader peak into a different world as well as being able to relate to such experiences on a human level.

An American Brat follows the story of a Parsi mother who is afraid that her young daughter is being negatively affected by the conservative and ever increasing intolerant atmosphere of the country. Zareen convinces her husband and family to send Feroza to the USA in order to experience a different, liberal society and return as a confident and aware Parsi woman. The Zia era was obviously injurious to all minorities, including women, non-Muslims, and minority sects of Islam as well. This decision coming from a woman, even though she is Parsi, is very progressive and forward thinking, maybe because Zareen is a self proclaimed feminist and political activist.

More than finding out the challenges Parsis have to face as a minority community when it comes to the modern world, I was pleasantly surprised to find out huge similarities in the way which we as a Pakistani community behave towards different issues, be it Parsi or Muslim. The novel exposes our collective fear of growing girls and their budding sexuality. It is considered more important to sexually indoctrinate girls and suppress their sexualities than it is for boys. While comparing Feroza’s situation to that of her uncle Manek, Zareen’s mother and Feroza’s grand mother says, “But he’s a man; he can get away with a lot. But who’ll marry a girl who’s been up to God-knows-what? Our elders used to say, keep the girls buried at home” (Sidhwa  122). The way Parsi community deals with their shrinking numbers is by bringing up their children with the fear of what marrying a “non” would end up doing to them and their family. Cyrus, Feroza’s father, believes that “[I]t was hard to keep young girls as innocent as one might wish.” (Sidhwa 11) and this fear stems from the fact that there are already only a little above a million Parsis in the world, and if they kept marrying “nons”, their community will have no future.

Written by the Indian author Rohinton Mistry, Such a Long Journey differs greatly from the previously mentioned novel. Unlike Sidhwa’s novel, this has a nostalgic air to it. Gustad Noble and his family represent every lower middle class family who is struggling to make ends meet. Like any father Noble has high hopes for his son. He is a simple religious man who wants the best for his family. He has an attachment to his past and looks back at it with desire and sadness. In short glimpses we come to know of the strength he felt with his grandfather and his father, and how their lives were toppled. He belongs to the class which is the most vulnerable when it comes to economy. He is the truest representation of that class, its fears, daily lives, and their desires and dreams.

This story is the story of loss, nostalgia, political crimes, oppression, and the unstoppable journey of life. Throughout the novel we see Gustad trying to cope with the loss of his father, his son, his friends Dinshawji and Bilimoria, and the babbling fool Tehmul. Dinshawji’s comment on the situation of Parsis reflects this sense of loss too. He says, “Parsis were the king of banking in those days. Such respect we used to get” (Mistry 38). And again he comments on this sense of loss while discussing the road names which have been changed over the years, “Names are so important… so what happens to the life I have lived? Was I living the wrong life with all the wrong names?” (Mistry 74).

“Mixing memory and sorrow, he though fondly of the old days”, such is the life of Gustad Noble. He does not find it difficult to mix in with the world of today but he still finds it hard to let go of the past. The memories of his grandfather’s carpentry and his father’s book shop are a part of his happy days which have passed. Now he tries to revive those memories by building a shelf with his son and filling it with the books he buys from time to time.  When his son refuses to go to the prestigious IIT, he feels dejected and betrayed. “What kind of life Sohrab was going to look forward to? No future for minorities, with all these fascist Shiv Sena politics and Marathi language nonsense… Sohrab had snatched away that purpose, like a crutch from a cripple” (Mistry 55).

Both these novels treat their subjects very differently. But both authors try to show through different means the inside lives of Parsis as individuals and also as a community. Through the eyes of a female and male protagonist who do not resemble each other at all and grapple with entirely different situations, we come to see the diversity within the Parsi community. We see the trials and tribulations they go through as well as their mode of interaction with the world around them. With their ever decreasing numbers, the Parsi community faces some valid fears against the modernity of the world. These novels expertly portray how they adapt and adjust with this ever changing world within their own capacities.

When I am Seventy: Satyapal Anand