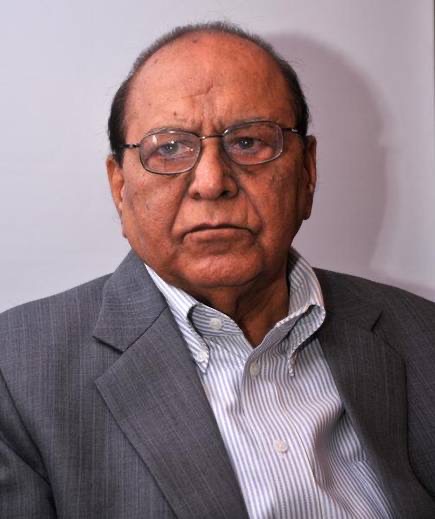 Right now when the world is passing through the curse of pandemic, unrest, anarchy and social upheaval, the legendary Urdu critic Gopi Chand Narang’s two major Urdu books have been published in English translation for the devoted readers of literature having interest in Urdu Ghazal and great Urdu poet Mir Taqi Mir. Gopi Chand Narang is one of the major literary personalities of India and a giant scholar who has won marked recognition all around the world for his outstanding contributionto the genre.  He is a professor emeritus at the University of Delhi and Jamia Millia Islamia, New Delhi, India. Gopi Chand Narangis also the former president of Sahitya Akademi, and has been awarded several national and international honors including the prestigious Sitara-e-Imtiaz (2012) and President’s Gold Medal (1977) from Pakistan; and the Padma Shri (1990), Sahitya Akademi Award (1995), and the Padma Bhushan (2004) from India.

The Oxford University Press has published Narang’s scholarly book which is considered as one of the best on the subject in Urdu literature—‘Urdu Ghazal-Aur Hindustani Zehn o Tahzib’ (2013), in English as Urdu Ghazal— A Gift of India’s Composite Culture(1), (translated from Urdu by Surinder Deol). The book is in three parts, first, it discusses the cultural landscape of India’s composite culture, the elements that essentially play role in the formation of the composite culture, and the smell and significance of the composite culture in the backdrop of many last centuries. The second chapter classifies the Urdu Ghazal into Love, Beauty, and Self, the same chapter put lights on the aspects of the Urdu Ghazals— Metaphors, Similes, Symbols, and Imagery. The third chapter discusses the Urdu Ghazal in Twentieth-Century— Neo-classicists, the Progressives, Modernists and Postmodernists poets, their background, their leitmotifs, and their canvass.  In the preface, Gopi Chand Narang has stated that Ghazal is a marvel of the magnetic dynamism of ‘husn o I’shq’ in highly charged metaphoric idioms. It is a celebration of love, joy as well a profound capacity for enduring pain and suffering. Ghazal is the soul of Urdu poetry and the play of creativity at its peak. 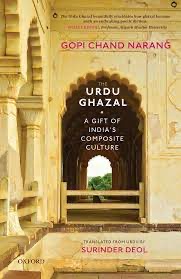 This book is unique and one of its kind on the subject, the reader can evaluate how minutely Gopi Chand Narang has discussed the composite culture of India in the reference to the advent of Islam, the Bhakti Movement, the Origin and Evolution of Sufism, the Social Dimensions, the Creative and Aesthetic Dimensions of the Ghazal and the Aesthetics of Genre of Urdu Ghazal.  Understanding this journey of the Ghazal span over many centuries a reader realizes the crucial linguistic and civilizational aspects of the  formation periods of the Urdu Ghazal, beauty of the Dakani Ghazal, its influence of the Early Delhi Ghazal, the pinnacle of Beauty in Urdu poetry— of Mir Taqi Mir and Ghalib, the poets of their time, poets and poetry of Lucknow school of the Urdu Ghazal, the greatness of Ghalib, and the new age of the Urdu Ghazal in the form of the Delhi School of the Urdu Ghazal, the major poets of the era and their verses. The book is a sort of discovery of self through the journey of Ghazal, it contains masterpieces of Urdu ghazal, and it interprets the different ages and linguistic aspects of each age.

The book is also a study of Indian civilization and how it shaped and found space for itself in the Urdu ghazal.  It is a detailed study of the metaphor, similes, symbols, and imagery as the key tools of the poetry, on the other hand, the cultural and mythological history, how it shaped the minds of the poets and become the essential aspect of the beauty of the poetry. The story of Rama and Sita, its variants, Krishna, Radha, and Gopis, Ganga, Hindu festival like Divali, Holi, Basant, Hindu customs and rituals, the Indian way of life, flowers, and flowering trees, birds and animals, seasons and climate, cities and places, Indian music and ragas, have been depicted in the work of major poets, the book provides is replete with the rich examples of it.

As we note that  with the passage of time, Urdu ghazal has also changed its expression and aesthetics, the book puts ample light on the neoclassicists and how the political and cultural milieu of the nineteenth century— especially post 1857, and delineates how it changed the outlook and prospect for life and literature. It maps the important questions such as, how the first freedom struggle 1857 affected life in Delhi, northern India, and other parts of the subcontinent, with a special reference to the Urdu intelligentsia and their social life. This book gives a profound understanding of the period and its reflection in the work of leading poets of the time including Hasrat Mohani, Akbar Allahabadi, Allama Iqbal, Muhammad Ali Jauhar, Shad Azimabadi, Ram Prasad Bismil, Chakbast Brij Narayan, Yagana Changezi, Asghar Gondvi andJigar Moradabadi.

Furthermore, the book has revisited the independence struggle and partition, its influence on  poetry and ghazal, it enquires and probes deep into the influence of the Progressive Writers Movement that started in the 1930s and the contribution of the leading progressive poets like Josh Malihabadi, Firaq Gorakhpuri, Faiz Ahmed Faiz, Makhdoom Mohiuddin, Sahir Ludhianvi, Majaz Lakhnavi, Anand Narain Mullah, Ali Sardar Jafri, Jan Nisar Akhtar, Kaifi Azami, Majrooh Sultanpuri, Ahmed NadimQasmi, Habib Jalib, Zehra Nigah, and others, how they try to use ghazal as a form of expression to take their political mission in front of the masses and also in pursuance of unity, brotherhood, and quality is also the important focus of the book.

The book intensely discusses modernism and post-modernism in Urdu literature, how Western classical and romantic tradition, or the writings of Soren Kierkegaard, Friedrich Nietzsche, Fyodor Dostoyevsky, Edmund Husserl, Martin Heidegger,  ReneDescartes, Jean Paul Satre, Albert Camus, and others have influenced the human psyche and understanding. It is a comprehensive study of the Modernist movement in Urdu and compares it with the traditional ghazal and its leitmotifs. The major poets of the movement like Miraji, Majeed Amjad, NasirKazmi, Rajinder Manchanda Bani, Jameeluddin Aali, MunirNiyazi, Jaun Elia, Shakeb Jalali, Shuja Khawar, Shahryar, NidaFazli, Mohammad Alvi, Zafar Iqbal, Irfan Siddiqi, KishwarNaheed, Iftikhar Arif, and others have been discussed and their selected ghazal have presented.

The second book is ‘Hidden Garden—Mir Taqi Mir’ (2). Undoubtedly, Mir is the ‘god of Urdu poetry’ (Khuda-e-Sukhan). His cosmos of poetry was concealed in the six divans, or the collections of poetry, consisting of approximately 14000 couplets, there are mainly ghazals, but they do also cover other genres, for example, masnavi, qasida, and rubai.  Mir Taqi Mir is known as the poet of grief, agony, suffering, and torment. Gopi Chand Narang has stated that before embarking on his (‘Mir’s) poetry it is important to become familiar with the roots of Mir’s pain and scars on his psyche. Thus, the book is divided into two parts, in  Part-1, there is a detailed preface about the life of Mir Taqi Mir, his stay in Delhi and Lucknow, and why he had to leave Agra where he was born. The stories of his love-affairs, how that affected his mental health, the trauma he lived with, and his unfathomed madness for the beauty and ghazal. Once the reader is equipped with the necessary understanding of the persona of Mir, his era, the political and social unrest of the time, the culture and poetic ethos, or the essentials of Mir’s personality, there await 50 selected ghazals of this god of the Urdu poetry with the originals in roman script prior to English translations. 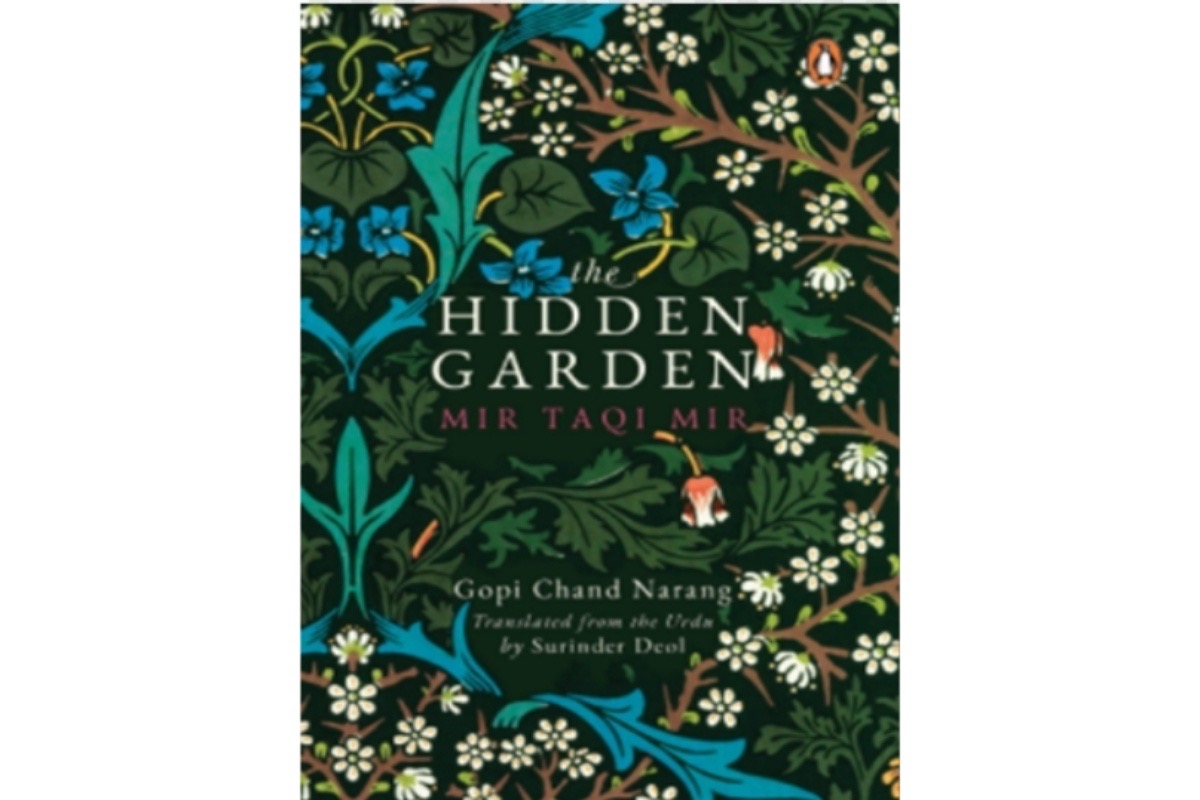 Part –II is titled ‘the Beauty of Mir’s Poetic Voice, in this sectionGopi Chand Narang has discussed the hallmark of the distinctive creativity of Mir, his attributes to Rekhta, and how he used the simple, conversational language for depicting his immense creative force. How Mir’s play with the words was different from the poets of his times. This part is divided into four sections—A Poet of Countless Delights, A Deceptive Simplicity, A Delightful Synthesis of Persian and Rekhta, and Urdu’s First Complete Poet. This helps readers to understand what was hidden in the garden of Mir’s poetry, what is the secret behind the deceptive simplicity in the poetry of Mir. Gopi Chand Narang has stated that Mir’s simplicity is truly quite deceptive; there is an impression that simplicity of the syntactic structure equals simplicity of poetic meaning which is not correct. However, the reader can experience that the world of Mir is simply hidden in his simplicity, sorrowfulness caused by a broken heart, and cheerfulness about the uncertainty of existence. After finishing this book, the same reader can feel opening up a magical gate in front of him through which he can once again begin a journey towards the Hidden Garden in the ghazals of Mir.

The translator of this mammoth book Surinder Deol is the author of  Sahir: A literary Portrait (2019) and has worked at the World Bank in Washington, DC, in 1983. Divan-e-Ghalib as The Treasurer: A Modern Rendition of Ghalib’s Lyrical Love Poetry (2012). He has also authored a novel called Endless Life (2012) and a collection of poems, A Moment in the Universe (2006). He translated Professor Gopi Chand Narang’s Classic Study of Ghalib’s Poetics into English which was published as Ghalib: Innovative Meanings and the Ingenious Mind, (2017)

Rahman Abbas (1972) is an Indian Urdu novelist and the winner of India’s highest literary award the Sahitya Akademi Award for the year 2018 on this fourth novel ‘Rohzin’, (The Melancholy of the Soul). Rahman is also twice the winner of the State Sahitya Academy Awards.  He writes in Urdu and English. Rahman Abbas is an author of eight books including four novels.

Polygamy in Pakistan by HILDE JACOBS