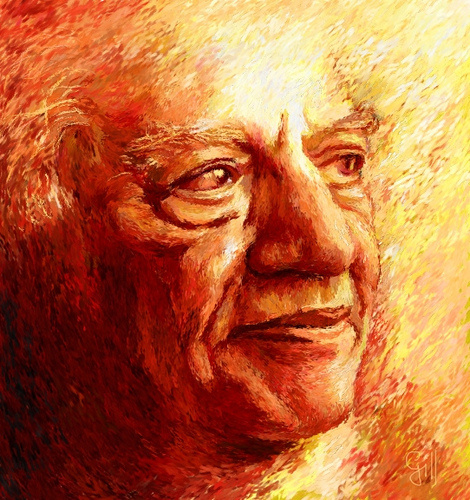 (A paper read in the Karachi meet of THE RA VIANS, the alumni of Government College & University, Lahore, now living in Karachi to celebrate Faiz centenary. It was presided over by me.       Guests included Faiz’s daughter Munayyza Hashmi, Faiz’s long time friend, (now Karachi based) Zohra Nigar, Anjuman Taraqqi Urdu’s chief, Dr. Fatema Hasan, and others)

On a one-to-one basis, my personal contact with Faiz has been fewer than a dozen times. All these meetings took place in London during the seventies of the last century. One last meeting with him was in 1983, a year before his demise at the relatively young age of 73. Let me explain. I have never publicized my friendly contact with him and, therefore, much has remained hidden. I shunned Mushairas and Mehfils organized by local Urdu elite in London and kept my distance. It was either he or Chacha Mulk who gave me a phone call at my residence in Milton Keynes where I was a research associate at the British Open University. Chacha Mulk        (the renowned novelist Mulk Raj Anand) didn’t drive himself and he would ask me to bring my small Morris Minor, pick him up from Indian High Commission’s Guest House and take him to  Faiz.

Faiz was twenty years my senior; Chacha Mulk was twenty-seven years older than me. Another example is Saqi Farooqi who was a quarter century junior to Faiz as also to Noon Meem Rashid  and yet had a warm and intimate friendship with both. Let me add in haste that friendship is neither bound by age nor by gender. It only partakes of common interests, concernments, conversation topics – and most important of all, participating partners’ level of intellect, education, mental calibre and parlance of conversation. I believe that he was more akin to me in this respect than to Mulk. Maybe one reason was that Mulk just garbled his Urdu and was never adept in speaking that language.

The one and only exception to my rule of no public display of our sporadic contact and my reverence for him or his affection for me was the irreverent poem I wrote about him the same day that I met him 1983. I published the poem six years after his death. Titled “Aik Nadaar Mulk ka Shair”, this poem is included in my poetry collection “DAST E BURG” (1990). It was written in a sombre mood. When I met Faiz that evening, I found not his usual assured self, but a fearful, broken man lurking in him. I forthwith knew that he was shattered both in his life-long belief in Communism as also in his health. His conversation with me bore testimony to this loss of faith.

He was suffering from Fistula and was in pain. He had come back from a visit to Soviet Union     which was at the brink of dissolution and the chaos before its final break into bits and pieces  across Europe and Central Asia. This time he was staying not at Zohra Nigahar’s house, but at a different location. If my

memory serves me right, it was an apology of a house (so small it was!) in Bamsbury, across Kings Cross Road where it changes its name to Euston Road. Just whose property it was I never enquired. Alys, his wife and Muneeza, his daughter, both were with him. Salima wasn’t there. As we know, his two daughters were married to two Hashmi brothers, Shoaib and Humair.

Leaving my personal reminiscences of Faiz’s personality to the later instalments of this article, I will now take up the most important aspect- his poetry, as I evaluate it now.

FAIZ AS A “MODERN” POET

The first quality of Faiz’s poetry that strikes me is its visual imagery that permeates into the essential musicality of his verse. After Iqbal, Faiz has this quality in abundance; the difference is “baland aahangi” (loud tenor) in Iqbal and the silk-like soft and sometimes cloyingly sweet tenor of Faiz. This quality is less apparent in other “Taraqqi Pasand” (progressive) poets. Faiz cultivated the ghazal format in a neo-classical or post-romantic genre and he brought a marriage of convenience between the classical and romantic modes. It is in this context that the second generation of Progressive poets took their content, communicability, style and even the Faiz-inspired parlance of ghazal to its zenith.     It became almost a fad with poets. “Thus Faiz’s poetic felicity,  choice of words, coinages, allusions, neo-classical reliance on the true – classical patterns of ghazal became order of the day”.

The quality that differentiates Faiz from, say Josh Malihabadi, both in his nazms and ghazals, is that that he leaves things unsaid or half-said or just hinted at or given a symbolic or metaphoric treatment to  achieve shareable quality of modes of poetic experience with the reader. Josh, on the other hand, doesn’t leave anything unsaid. I would use the words “poetry as a slogan” and “poetry as a sweet whisper” in the case of these two poets.

Now we will see how and why Faiz was not as new-fangled as Noon Meem Rashid. It can be said that Faiz was tradition-bound not only in the poetic parlance used by his predecessors but also in the socio-political and socio-cultural context in the post-partition days. This is borne out by his ghazals as also his nazms. A random selection of ghazal’s stock-in-trade metaphors will bear this out.

Let (my beloved) wilfully enjoy the stance of ignoring me: My duty is to keep on expressing my avocation of love.

For the source of this mazmoon, one might refer to Ghalib’s couplet:

She (the beloved) would never give up her neglect: Why should I change my habit?

Countless were the rituals of tyranny but none (as cruel) as in your social get-together: The punishment precedes the crime of my (lovelorn look (at you): the wrath comes before even I speak.

If you can give me your companionship, do it now, for the path of (mutual) loyalty is not long: There’s no place to neither stop, nor (any other) destination, but the height of our martyrdom at crucifixion.

Subject, locale and the metaphors too dear to the age-old traditional modes of ghazal bespeak of Faiz’s debt to oft-repeated expressions. bahaar, khazaN, dum bhar ko, pal bhar ko, aate aate, jaate jaate – these are so commonly used that no one can erase them from the memory register of one’s racial unconscious mind in the Jungian sense. However, what might be highlighted is Faiz’s unparalleled expertise in wringing the last drop of political or contemporary-contextual overtone of content and meaning in the political sense. While his predecessors had no political message to convey (except for lqbal who used the straight pulpit style to communicate a politico-religious message to Muslims), Faiz’s contemporaries (or immediate predecessors like Akhtar Shirani) had not acquired the subtlety of his style.

The answer to the question “Is he an experimentalist? is in negative. He is an imagist in the limited sense of the word as it applies to the classical nuances of the ghazal format, but, unlike Noon Meem Rashid, he is neither an experimentalist nor a coiner of new-fangled images like the first and the second generations of poets in the early twentieth century in England.

What Delhi Needs to Learn from Islamabad by SYED ATA HASNANIN