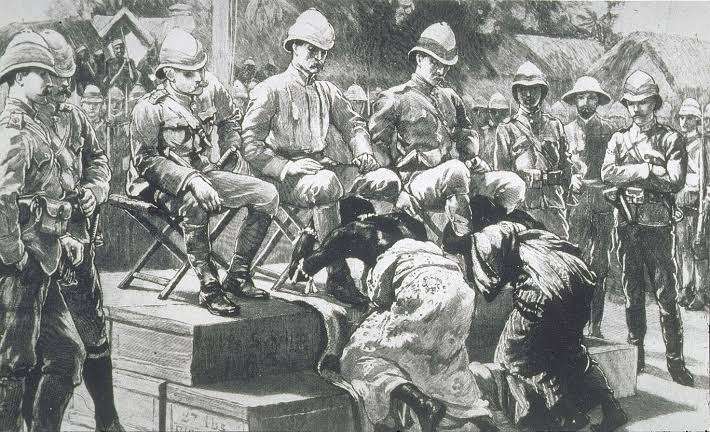 Churchill has been accused of stereotyping certain people with “slit eyes and pigtails.” To him, people from India were “the beastliest people in the world next to the Germans.” He admitted that he “did not think that black people were as capable or as efficient as white people.”

It is “absurd and shameful” that a statue of Winston Churchill has had to be boarded up because of fears that it could be vandalised, said Boris Johnson. The war-time leader had expressed opinions which are “unacceptable to us today” but he remains a hero for saving the country from “fascist and racist tyranny”, he added. Boris was swift in defending a monument of British Imperialism. But amid the current turmoil of Black Lives Matter movement, Churchill isn’t the only one on the list. There are calls for Mahatma Gandhi’s statue in Leicester to be taken down too. In Bristol, protestors toppled the statue of Edward Colston, a seventeenth-century slave trader and tossed it into the sea at the same harbour where his slave ships once docked. It did give an aura of the Me Too movement which mortified many public figures who were once shining stars only to disappear in the abyss overnight.

Churchill has been accused of stereotyping certain people with “slit eyes and pigtails.” To him, people from India were “the beastliest people in the world next to the Germans.” He admitted that he “did not think that black people were as capable or as efficient as white people.” Despite his idiosyncrasies, indulgences, egotistical personality and self-absorbed tendencies to push for the blaze of publicity, his wartime speeches were a great inspiration to embattled Britain against Nazis. Historians ranked him as the greatest nineteenth-century prime minister. Similarly, Gandhi is also alive for his critics too. An anti-colonial protester, a religious thinker, a pragmatist, a revolutionary of non-violent movement, a quirky politician and a whimsical Hindu patriarch remains accused of racism till date. In 1893, for instance, he wrote to the Natal parliament saying that a “general belief seems to prevail in the Colony that the Indians are a little better if at all than savages or the Natives of Africa”. In 1904, he wrote to a health officer in Johannesburg that the council “must withdraw Kaffirs” from an unsanitary slum called the “Coolie Location” where a large number of Africans lived alongside Indians. “About the mixing of the Kaffirs with the Indians, I must confess I feel most strongly.”

History has abundant examples of such split public personalities that are revered for some characteristics but condemned for others. But why does the general public suddenly react in such a knee jerk fashion and see it all in black and white? The answer is much more complex but could be examined in the two broad paradigms of the human consciousness and nature of history. One fact often overlooked is the complexity of the nature of human beings. Celebrities and public figures are mortal beings after all and not immune to their internal psychological fragilities and the prevailing attitudes of the time they lived in. They are not different from those who adore them or protest against. The idea of good and bad changes as the history unfolds and as new ethical dilemmas occur. It wasn’t long ago, for instance, that homosexuality was a punishable crime in western societies. But in a world which has a memory of a fish and which feeds on the top twitter trends daily, it is hard to embrace these complexities in a given time. It is this restricted capacity of public thinking which politicians often exploit in order to gain power. So the same Boris Johnson whose current rhetoric is in favour of embracing the full picture was once oversimplifying the complex issues of the economic plight of Britain and blamed it all on the European Union and migrants. But such short-lived public outcry always has a positive feature of bringing about issues long forgotten, however briefly, to the forefront. However, the issue of racism isn’t just a by-product of refined moral sensibilities of postmodern culture or an unwanted result of the era of immigration. It is a fact of life for many, deeply ingrained in the history of colonialism. Therefore, in order to grapple with the issue of racism, it is imperative not to deal with it as a social media sensation but to go back to the basics of the post-colonial discourses.

In 1492, the Italian explorer Christopher Columbus set his sail and Europe began to take control of more and more of the world. The unequal relationship at the heart of colonialism became the subject of fierce debate. In the eighteenth century, the British Philosopher Jeremy Bentham addressed his pamphlet Emancipate Your Colonies to the French. The premise of the critique was that Europeans and Non-Europeans are equal so they should have the autonomy to select their governments. In contrast, John Stuart Mill argued that Europe had a responsibility to “civilize” people who were “savage”. In the following century, Karl Marx argued in his magnum opus Das Kapital that freedom grows slowly over the course of history due to conflict between the social classes. The Russian revolutionary Vladimir Lenin took Marx’s theory and applied it to imperialism, arguing that it is because of capitalism that imperialists need new territories and markets. Consequently, imperialists, he concluded, were “parasites” on their colonies and colonialism was an evolution of capitalism in progress. By 20th Century the psychological and social implications of colonization were analysed. The American social theorist W.E.B. Du Bois, for instance, wrote on “double consciousness” of blacks in the US. He explained the psychological experience which a black person go through by “looking at himself through the eyes of others” in a white-dominated society and judge himself through a “white yardstick”.

Amongst the giants of post-colonial theorists’ stands out the work of Algerian psychiatrist and revolutionary, Franz Fanon, who wrote his work “The Wretched of the Earth” in 1961 which remains a manifesto for the dispossessed, the powerless and the colonized till date. It was one of the original works of anti-colonial theory repudiating the idea that Europeans have a right to dominate non-Europeans because they are unable to govern themselves. The young Fanon lived through turmoil when the European powers were becoming weaker in the aftermath of WWII and began to shed their colonies. As a member of the Free French army, Fanon witnessed a local population reduced to “picking the leftovers” in the rubbish outside the barracks for food. In the Algerian War of Independence 1954, he found himself treating both members of the Nationalist Pro-independence Party victimized by torture and French officers psychologically damaged by killing and torturing them.

In his central argument, Fanon argues that colonialism is both created and sustained by violence, so it can be only be destroyed by violence. It cannot be ousted by negotiation alone. Fanon’s solution is both psychological and physical. For Fanon, the violent resistance against the colonizer serves two purposes. Firstly it liberates the colonized politically and secondly, it has a therapeutic effect because violence serves as a vessel to purge the feeling of domination. Although his enquiry references the thought and analysis of Karl Marx that history is a process of increasing freedom which progresses through the struggle between classes, he rejects Marxist premises such as the idea that economic change alone changes a society. Fanon was widely criticized for his glorification of violence and making it justified and legitimate in a time when the non-violent movements were becoming popular such as those led by Gandhi and the US Civil Right Movement which were successful without violence. The political theorist Hannah Arendt abhorred his endorsement of violence in stronger terms like many others. But the literature and language scholar from Harvard, Homi Bhabha argues that Andent’s objection on Fanon’s work has less to do with the occurrence of violence than with “Fanon’s teleological self”. In other words, Arendt is not objecting to violence, as much as the idea that violence is destined to occur will lead to a better world. For Bhabha, Fonon’s notion of violence is a struggle for psycho-active survival and agency amid the agony of oppression.

Advancing the analytical approach to various cultural, social and psychological legacies of colonialism, The Palestinian American thinker Edward Said subsequently argued in his major work Orientalism (1978) that the problem of colonialism is not domination but in representation, for instance, literary and scholarly description, argumentum ad hominem or characters in a film that re-enforces the colonized person’s feelings of inferiority by objectifying him. Said argued that since most of the world literature, history and social sciences developed in the western world, it is inherently biased towards the colonized and therefore, it is Orientalist by its very nature. Said’s Orientalism is a system of thought that casts the West as superior and the East as inferior, and so justifies the West’s domination of the East. He insisted that Orientalism did not end when the colonies ended. It is still very much alive and evolving. The Western societies, although has an unshakable belief that they understand the world fully are in fact unable to understand the colonized because they see it through an “Orientalist’s lens or an outsider’s perspective”. In other words, they view it through the history, literature and art which was created under a European hegemony.

But how do these ideas work in today’s globalized world? The relevance could be seen in the post 9/11 rising tide of Islamophobia which brought about a resurgence of the kind of thinking that portrayed Africans as unable to govern themselves. This time the idea was to make Muslims appear dangerous. But painting 1.8 billions of Muslims with a single stroke of the brush by portraying them dangerous had its own consequences which the world is still facing today. Under the hegemonic pressure of the US alliance, violence has only increased.

So what is the relevance of Fanon’s ideas in western societies itself? The French Algerian psychoanalyst Alice Cherki tried to tackle this question. She writes that the economic globalization today is creating a greater inequality not only between the developed and the developing world but also within Western societies, causing marginalization of certain groups and eventually dehumanizing them. But taking Fanon from his historical subjectivity and comparing his real experience of direct colonialism in the 1950s Algeria to today’s indirect neo-colonialism is an interesting debate. Incidents like the death of George Floyd and the resulting eruption of violence mirror the dynamics of the settler against native straight into the civilized modern society. The experience of marginalized and economically deprived groups in a highly civilized society is exactly similar to those who had the first-hand experience of colonialism. The clean, pleasant and civilized in comparison to the dirty, mean and savage. The colonized/oppressed person is deemed inferior the oppressor does not believe or acknowledge that he or she is inferior. Therefore, from Fanon’s perspective, to rediscover their humanity and assert their true self the oppressed must become violent.

In the aftermath of George Floyd death, violence has been used to disperse the protesters. Police cars have been ramped into the protestors crowds. The Trump administration threatened to invoke the Insurrection Act of 1807, the The act which empowers the President of the United States to deploy the US military within the United States to suppress a civil disorder. Interestingly this Act was passed to oppress the Native Americans by the settlers when America was being colonized.

The author is a mental health professional and a keen reader of humanities and social sciences. He can be reached ataltafmd@gmail.com

The Cobbler – Fatima Saleem
A ‘MALAMATI’ POEM
To Top
Shares