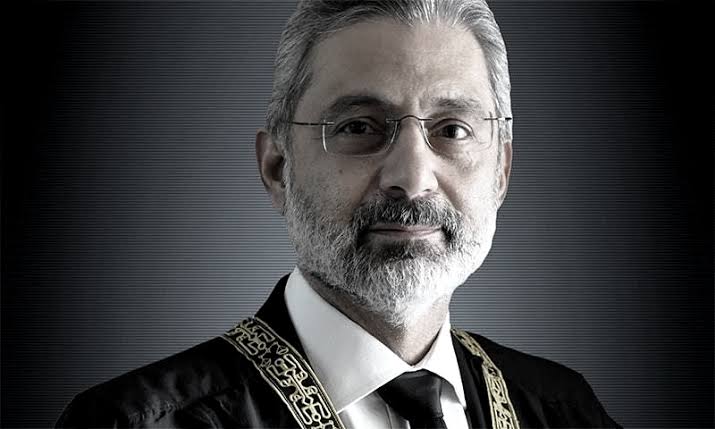 Justice Faez Issa is being systematically targeted by the Status Quo as he is not bowing down to the whims and wishes of ‘The Boys’. His fight is not for himself rather for rule of law and Civilian Supremacy.

In other words it is Justice Faez vs General Faiz. The same Lt General Faiz whose name was in the limelight during the Faiz Abad Sit-in where a peace deal was struck with his signature on the paper.

Subsequently, the Faez abad sit in verdict pronounced by Justice Faez Issa criticized the premier Intelligence agencies on poking their nose into other’s matter and over stepping their constitutional mandate. Hence, the reference seems to be an old wine in a new bottle to make the upright Judges silent.

I remember at the initial stage of proceedings in the Supreme Court, the counsel of Justice Faez Issa made an objection over the presence of few judges in the bench to which the bench replied that neither any Judge has any vested interest nor is any judge biast. The underlying cause of the above mentioned objection is quite obivous, as every Justice, junior to Justice Faez Issa, is a potential candidate of Chief Justice.

Consequently, the decision on Justice Faez Issa’s petition might turn out to be a Honey trap because as per the tax experts, the most difficult thing is to make satisfy the Tax authorities given the complexity and intricacies of the tax laws. For instance, out of 7 crore if u cant justify seventy thousand, you are considered guilty.

Moreover, the FBR is under the same Govt which moved the reference against Justice sb,so one can smell a rat pretty easily. Although the same President once tweeted that Faiz Issa is an honest and upright judge. What a joke!

Amid all this, all the Bar Counsels stood firm on their principle stand of independant judiciary and backed up Justice faez Issa sb through all thick and thin. ‘The Boys’ preempted that this support is the main hurdle to throw Justice Faez Issa out of the scene, hence they have compelled the puppet Govt to tighten things around the Lawyers.

Consequently, the Govt has proposed an ammendment to the the Legal Practitioners and Bar Councils Act whereby the license of an advocate can be cancelled for a life time, just to pressurize the lawyers community so that no resistance is initiated by them.

Mark my words, if Faez Issa loses his battle,no judge will ever dare to challenge ‘The boys’, given the fate which those who did met.

Thus, it is duty of the whole nation to act as a watchdog for the rule of law particularly in this case.

The victory and challenges for Joe Biden