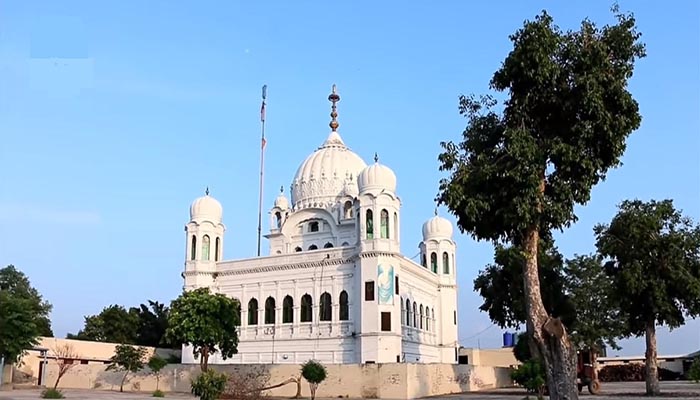 Yesterday Prime Minister Imran Khan performed the groundbreaking of the corridor connecting the Gurudawar sahab in Kartarpur area of Narowal district with Dera Baba Nanank in India’s Gurdaspur district. People and ministers from both sides of the border attended that groundbreaking ceremony. When prime minister Imran arrived at the Kartarpur, COAS Gen. Qamar Javed Bajwa and FM Shah Mehmood Qureshi were accompanying the Prime Minister. Meanwhile from across the border Navjot Singh Sidhu, Minister for food Hatsimrat Kaur and Minister for housing Hardeep S Puri attended this groundbreaking ceremony of Kartarpur Corridor. Aforementioned Indian Ministers stood alongside the Prime minister Imran Khan as he laid the foundation stone of the Kartarpur Corridor. While expressing his feelings to the audience in Kartarpur Navjot Sidhu said PM Imran Khan will be written in the golden words in History. Speaking at the ground-breaking ceremony of Kartarpur Corridor, Indian Punjab Minister for Tourism and Culture Sidhu said religion should never be seen through the prism of terrorism and politics. And he added we need to revise the thinking about peace. He said war is not the solution to any problem, violation and bloodshed should be stopped for the sake of peace. These were meaningful points made by Indian minister. Navjot Singh Sidhu said Kartarpur Corridor will connect the hearts of people. He applauded the Pakistan’s effort to attain the peace in the region. He also mentioned that Pakistan respects all the religions. Prime Minister Imran Khan addressed the guests most of them Sikh Yatrees from India, said both Pakistan and India should move ahead with the determination to bring the prosperity in the region. He said we haven’t fought wars and bloodshed like Germany and France. Then why we can’t make a Franco-German like union. He added we want civilized relationships with India. He explained the major issue between Pakistan and India is Kashmir. And all that it need to be solved is the capable leadership from the both sides. He said it is perception that Army isn’t willing to solve the Kashmir Issue is not right. He claimed that Pakistan’s political establishment, military establishment and all of its institutions are standing on the same page over this issue. He presented the broad vision and stance of Pakistan and said, the past has stopped us from moving ahead and we will continue to be stuck in differences unless we break this chain. Past is just to learn the lesson. we have to decide now that come what may, we have to improve our ties, we have to live like good neighbours.

Meanwhile, Chief of the Army Staff (COAS) General Qamar Javed Bajwa termed the opening of the Kartarpur Corridor a “step towards peace” which the region needed.

Foreign Minister Shah Mehmood Qureshi said “Today, we are standing where Baba Guru Nanak spent the last 18 years of his life. Baba Guru Nanak spread the message of love and peace and I don’t think it is appropriate to associate him with any one community or religion.”

It was the first side of the coin, you can say Pakistan’s side. As a responsible nation of the world Pakistan showed its vision to attain the peace in the region and bring prosperity in the region. Pakistan wants to solve the Kashmir issue as soon as possible through the channels of negotiations and peaceful means. Pakistan considers war is not the solution to the any issue. But now look at the second side of the coin which can say India’s side. When some people were taking an initiative of friendship between both countries for the sake of peace in the region and showed its sick mentality and psychopath. India’s foreign minister Sushma Swaraj made a statement she said” bilateral dialogues will not start because of Kartarpur opening” and brushed off any possibility of improvement in the relationship between India and Pakistan. India will not attend the South Asian Association for Regional Cooperation (Saarc) conference if it is held in Pakistan. Now what does it mean? It means India has no guts to sit on the table of negotiations because India has nothing to argue.

Not only Indian government has such stance and perception over Kartarpur corridor Indian media was also lashing out the people striving for the peace and prosperity. Actually, India media and government are two wings of the same bird. Indian media does propaganda to support the Indian government’s narrative. Yesterday when Sushma Swaraj gave this statement India and renewed journalists on twitter were saying the same that is actually retraction and denial of the reality. Sushma said “Until and unless Pakistan stops terrorist activities in India, there will be no dialogue” and India Media and journalists were saying Pakistan should take action against Hafiz Saeed and its organization. Here I want you to learn how they create hype against Pakistan. Here Indian Minister gave a statement and there on media journalists were forming public opinion in her favour and using the name of Hafiz Saeed. When it comes to the reality, reality is that there is not even a single evidence against Hafiz Saeed. Hafiz Saeed himself has claimed that Indians and Americans can challenge him in international court or forum but till date India has not shown any such intention, why? Because they have no evidence, they just want keep creating a hype against Pakistan to keep this region in an unrest just to please the non – regional powers. But here in Pakistan some people has become habitual to go against the national interests and narrative in the name of freedom of press. Anyhow, it is another debate. Pleasant thing is that Pakistani nation is standing on the national narrative and standing by national institutions. Here I want to make a point for Indian military establishment and government that   no one can deny the peace history stamps this. If you want to keep pleasing the non-regional powers then keep in mind that you are going to be trashed very badly.

Joker- A Sociological And Literary Perspective