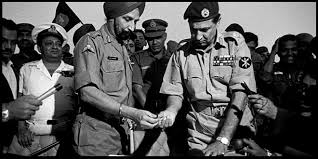 After the fall of Dacca, eight days later, on Dec 24, 1971, the then President of Pakistan Mr.Zulfikar Ali Bhutto set up the War Inquiry Commission, commonly known as the Hamood-ur-Rehaman Commission. It examined 213 witnesses, mostly Pakistani army officers, hundreds of classified documents and army signals between East and West Pakistan. The final report was submitted in November 1974, detailing how political, administrative, military, and moral failings were responsible for the surrender in East Pakistan.

The Findings:
The report said: ‘The process of moral degeneration among the senior ranks of the armed forces was set in motion by their involvement in martial law duties in 1958; that these tendencies reappeared and were in fact intensified when martial law was imposed once again in March 1969 by General Yahya Khan.’
‘Due to corruption arising out of the performance of martial law duties, lust for wine and woman, and greed for lands and houses, a large number of senior army officers, particularly those occupying the highest positions, had not only lost the will to fight but also the professional competence necessary for taking the vital and critical decisions demanded of them for the successful prosecution of war’, the Commission observed. 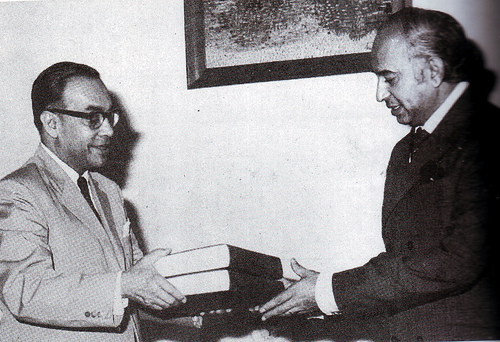 According to the Commission, these perversions led to the army brass willfully subverting public life in Pakistan. ‘In furtherance of their common purpose they did actually try to influence political parties by threats, inducements and even bribes to support their designs, both for bringing some of the political parties and the elected members of National Assembly to refuse to attend the session of the National Assembly scheduled to be held at Dacca on March 3, 1971.

‘A fully civil government could not be formed in East Pakistan as had been announced by the ex-President namely Dr. Malik- an old politician who had a weak personality. He could not annoy the Martial Law Administrator (Lt. Gen. A.A.K. Niazi) because of the unsettled conditions obtaining in the Eastern Wing. Gen Niazi, on the other hand cherished and liked power, but did not have the breadth of vision or ability to understand political implications. He did not display much respect for the civilian Governor; the Army virtually continued to control civil administration.’ The Commission discovered.

‘The installation of a civilian governor in September 1971 was merely to hoodwink public opinion at home and abroad. ‘Poor Dr. Malik and his ministers were figureheads only’, the Commission observed.

Real decisions in all important matters still lay with the army. In the first picture of the new Cabinet, Maj. Gen Farman Ali was prominently visible sitting on the right side of the Governor, although he was not a member of the Cabinet.

The rot began at the very top from the East Pakistan army’s commander, Lt-General A.A.K.Niazi, who the commission said acquired a ‘notorious reputation for sexual immorality and indulgence in the smuggling of paan from East to West Pakistan.’ The inevitable consequence was that ‘he failed to inspire respect and confidence in the minds of his subordinates with absolute absence of leadership qualities and determination; he also encouraged laxity in discipline and moral standards among the officers and men under his command’, the Commission determined.

The Action:
Nothing ever happened. The army’s role in dismembering Pakistan after its greatest military debacle was largely ignored by successive Pakistani governments and many of those indicted by the Commission were instead rewarded with military and political sinecures. Bhutto, reportedly, as Prime Minister personally ordered that each and every copy of ‘The Report’ be burnt. A copy of the ‘Final Report’ was however saved, which was leaked and published in Indian magazine India Today in August 2000. The following day, Pakistani Newspaper Dawn also carried the report. General Pervez Musharraf stated in October 2000 that the incidents in 1971 were a political as well as a military debacle, and that calls for generals to be tried were not fair.

The Aftermath:
Had action been initiated against the accused, as recommended by the Commission, the nation could have averted the coup d’état of Zia-ul-Haq whose 11 year rule of infamy completely devastated the political as well as the socio-economic fabric of the state and society. Besides many irreversibles, it led to radicalization of the society, which is now clearly visible. The policies of that era invited foreign intervention which is so deep rooted now. And the role of intelligence agencies from media management to missing persons is so pervasive. We could have also averted the illegitimate takeover of Pervez Musharraf and whatever followed thereafter.
Fast Forward to 2017:

• The security establishment plays the most important overt and covert role in ruling this country. It also defines the contours of national interest.
• The security establishment is in full control of our economic, defense and foreign policy. The political government is in no position to make organic changes in policy formulation.
• Actual annual defense budget exceeding rupees 1000 billion (some estimates exceed rupees 2000 billion) is allocated on direction from the military and there is no parliamentary oversight.
• According to human rights groups, more than 5000 persons are missing in Pakistan and nobody has any access to them.
• Wiki leaks reports that in March 2009 the Chief of the Army Staff considered removing the Supreme Commander of the Armed Forces and replacing him with the leader of ANP.
. The elected government of Nawaz Sharif, despite following all directives emanating from the defense establishment presently faces a grave threat and almost all key ministers have pointed towards a conspiracy to destabilize the civilian government.

Waseem Altaf is a free thinker based in Pakistan.