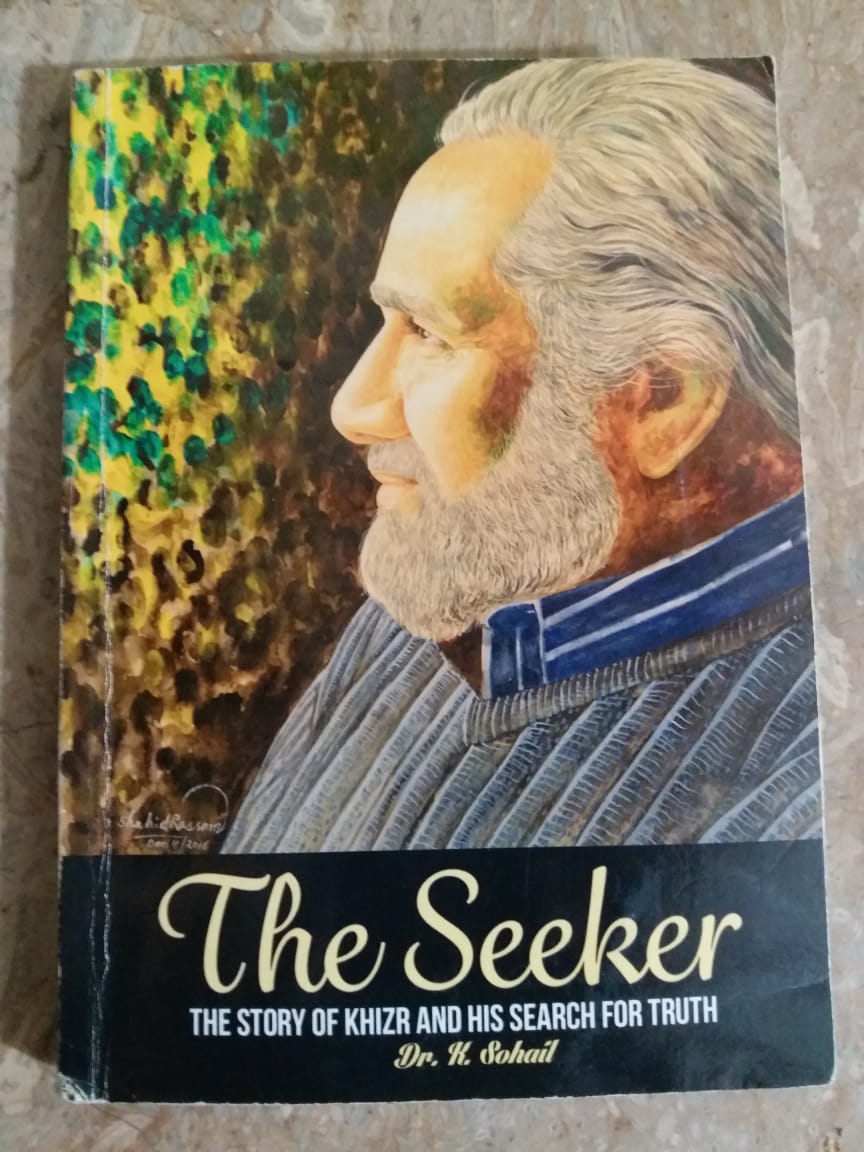 Books are very important in life because we get food for thought to sustain the assets of thoughts in poetry, prose, fiction and nonfiction. Some books are one-directional and lead us to think in a specific circle of life, but some books are multi-directional and invite us to think differently. These types of books provide us with a meticulous and macro lens to understand the mysteries of life. I want to share the same type of book which brought a serious change in my thought process and I introduced the method of learning, re-learning and un-learning. The book destroyed all my rusty and moth-eaten so-called ideas and imaginations and forced me to think new. This great book name is “The Seeker” written by Dr Khalid Sohail. He is my mental mentor. After reading this book, I gave it the name “The Bible of Humanity”. This book is full of wisdom and the story of a Khizar. It is the metaphor of wisdom which directs us to gain his personal truth, not others truth. Some people follow the traditional and outworn path to gain the truth, they belong to traditional majority. Some geniuses follow the untraditional path to gain their own personal truth, they belong to a creative minority. In his autobiography, Dr.Khalid Sohail calls himself (Khizar). He feels happy to know that he has absorbed his own truth. In trance, he realized that he has entered in the evening of his life and asks himself, have I got a complete truth or not. His inner voice replies that got some glimpses of truth but the complete truth remained hidden from him. He fears, he will die before he knows the whole truth. He decides to describe his attained wisdom in metaphorical forms. He creates seventy metaphors and connects them with his turnings of life and composed a masterpiece of art which reflects his own absorbed wisdom and insight. He shares his wisdom about books and calls them best friends, these friends provide him with a great approach to reach the high climax of understanding and create a revolution, rhythm and symmetry in his life. These books provide him with a channel to express his own thoughts in poetry, prose, fiction and nonfiction. Sitting in his labour creative room, he denotes all masterpieces to humanity. He feels lucky himself that he has a special gift in life. He thinks that he has multiple choices in his life and can adorn his life with every colour of life. He knows this reality very well that he is master of his own life, not others. Every metaphor of his life is the gift of wisdom and insight. He relates every metaphor with his empirical wisdom and practical experiences of his life and weaves an anthology of thoughts.

1.            He got the pearl of wisdom from the land of tradition and absorbed the deep meaning of traditional and collective truth and personal truth also.

2.            He got the essence of religion in the form of creator God, angels, divine interventions, miracles and the sense of guilt from his mother but Khizer walked away from that path.

3.            Khizer was impressed by the wisdom of his grandmother, who treated him in childhood age like little person. Khizer attained the deeper meaning of individuality from his grandmother.

4.            Khizer attained real meaning of friendship from his sister Amber. A little patch up scene gave him the essence of real friend ship, love and passion.

6. Khizer likes friendship and gives very important to his relations. 7. Khizer likes travelling in different parts of the world. Khizer met writers, journalists scholars and intellectuals to formed a group called Family of the Heart. These heart relations become successful within a short time because of the generosity of the spirit of its members.

8. Khizer got the deeper meaning of life from wisdom literature and folk tales. He read poems and plays, stories and essay, biographies and philosophies of the writers of the East and the West, the North and the South. He discovered that great writers create unique metaphors and stories which prove an asset for the coming generations and because of these efforts the series of folk tales and literature travel from one generation to the next generation.

9. Khizer was a multifaceted man but he did not like history. When he introduced from it, he impressed and absorbed profound ideas from historians. Khizer was grateful that history had introduced him to those aspects of human evolution that he had not taken seriously before.

10. Khizer dedicated this masterpiece of art to Aliza, loving granddaughter and representative of future generations.

The autobiography by Dr.Khalid Sohail is an unremarkable contribution for a new generation and seekers of truth. This book provides guidance to understand oneself and discover one’s own truth. This book gives a sense of freedom and forces us to think about life. This book is a treasure for readers to create their own meanings of life. It is a magical key to open the inner self and a conscious ladder to provide help to approach the higher meanings of life.