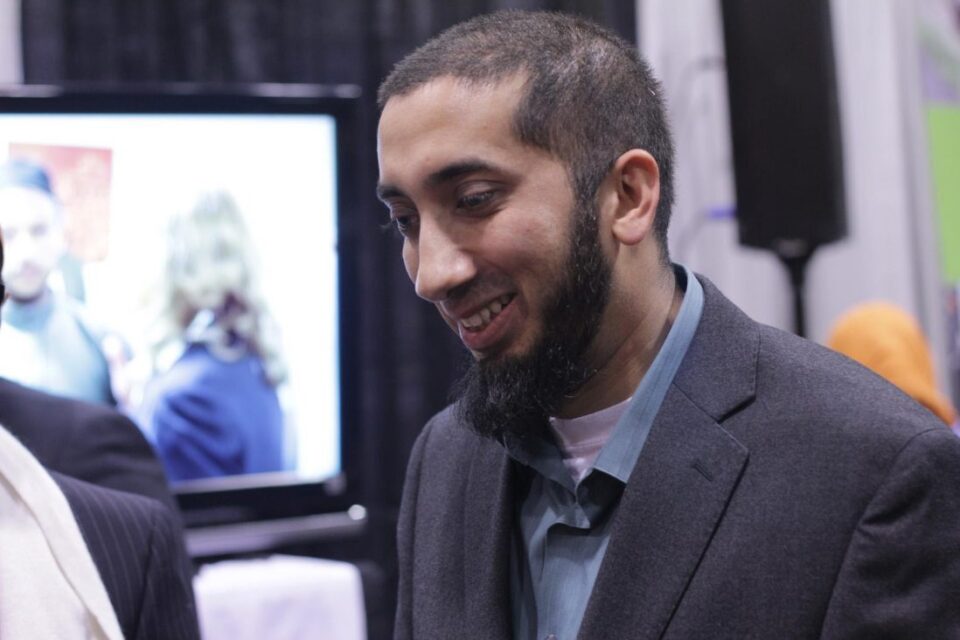 It was 2010 Icna convention, that was the first time I met with Muslim Scholar Nouman Ali Khan and his family.  I saw his wife and had a small conversation with her.   I realized one thing about her, she was a very simple house wife.  Two years ago, I heard the shocking news that Nouman Ali Khan divorced his wife. Almost every other person blamed his wife, that she couldn’t handle fame of Nouman Ali Khan.  She was jealous, and can’t see Nouman Ali’s women fans that’s why she got divorced.  Meanwhile, every person you want to talk about Nouman Ali Khan had a different story.

I remember in 2016 Icna Convention I wanted to attend Nouman Ali Khan’s session and I couldn’t get inside the room. There were so many people who were waiting to get their foot in, but they were failed.  In April 2017, the Icna convention’s made history.  This was the first time when Nouman Ali Khan didn’t attend the convention and didn’t give any speech.  Many people hearts were broken on that moment. Almost every other person I talked after two three sentences I heard the same question, “hey, do you know Nouman Ali Khan didn’t come this year to Icna Convention. What happened?” I didn’t know on that time, but I think know we all know what exactly happened.

In early June 2017, Imam Omar Suleiman the Founder & President Yaqeen Institute for Islamic Research wrote an article.  The article title was, “WHAT DO I DO WHEN I FIND OUT MY FAVORITE PREACHER IS CORRUPT?”  In his article, he pointed out the main issue and led us to the facts about the current situation.  “To the girls that get approached by their favorite speaker at a conference who quickly starts looking for a secret marriage, please don’t be led down that route. Marriage is meant to be a public celebration that protects your rights. A private nikah that likely doesn’t even meet the conditions for a valid one won’t protect you at all. You don’t know a person from a stage or a YouTube video, Imam Omar Suleiman said.” Unfortunately, the sad part is that, Imam Omar Suleiman was a student of Nouman Ali Khan.

On the other hand, Shekh Yasir Qadhi wrote in his Facebook post, “What would happen if my ‘fans’ and ‘admirers’ really discovered my true nature? For sure, they would lose respect in me, and they have every right to do that. Many would feel betrayed and angry, hurt and confused… Yet, in this whirlwind of emotions, ask yourself: does my evil change the Quran and Sunnah? Does my status alter the basics of theology – basics that I might have preached and taught these people? Do my own sins in any way diminish the glory or tarnish the mesmerizing beauty of the life and Sīrah of the greatest human who ever lived (SAW)?

May Allah conceal and forgive my faults, dear brothers and sisters, but if you ever discover my sins, feel free to cut me back down to my true level, as you should have done from day one. I give you full license to be angry at me, disgusted with me, boycott me if I so deserve.” He explained the problem with some very deep thoughts.

Yes, I understand that the both speakers didn’t mention any name. of course, they should not do that. Not because they don’t have any prof; it because they don’t want to mess up the situation any more. Tragically, people follow people.  They forgot that the person they are following with their hearts, at first, his a human and every human make mistakes. Although, that person who was exposed badly has no guts to admit it, he shouldn’t deny the facts.

Two years ago, I also heard the news that Nouman Ali Khan got married to his Al-bainnah secretary two weeks after his divorce.  Personally, I didn’t believe that news because I didn’t have proofs. I also heard that all Imam comity tried to stop Nouman Ali Khan.  They offered him, that they won’t leak any news about him, but he is not able to do speeches anymore. He agrees, that he won’t give any speech again. Then he broke his agreement and he gave some speeches. After his speeches, this temporary married issue about him become viral.

Off course Nouman Ali Khan denies everything. That’s what he could do. However, in his Facebook post he admits that he was not allowed to give any other speech and he broke his agreement.  “As for the ‘agreement’ that these individuals speak of that I’m no longer abiding by, perhaps I can offer some context. I tried to convince this group to allow for senior scholars and leaders from across the country to hear both sides and assist in civil fashion. They knew the presence of neutral parties would compromise their agenda so they threatened to not meet at all if anyone from the outside was allowed, he said,” ……. “Deeply concerned that my whole life work will come to ruin, I was abiding by their demand to not speak in public or teach, I discovered that they continued to disparage me in the vilest of ways. While I was in Mecca for Umrah, they held public gatherings attempting to rip my character to shreds allowing me no opportunity to even defend myself,” Nouman Ali said.

Another shocking news I heard yesterday is, “when Nouman Ali Khan getting married to someone that lady also getting the divorce paper from after two weeks.  There were many young girls who were victimize by him.” I got so hurt after this, because I know that Nouman Ali Khan has six daughters also. Yes, he is a father of seven children; six daughters and one son. If a daughter’s father, an Islamic preacher, cannot remember his family, faith, dignity, respect, what else we can expect to others?

If we talk about Muta’h so, according to google definition, Mutah is the “The temporary marriage, or nikah mut’ah, is an ancient Islamic practice that unites man and woman as husband and wife for a limited time. Historically it was used so that a man could have a wife for a short while when travelling long distances.” Moreover, misyar marriage also counts in that category.  The problem is today’s many scholars don’t allow Muta’h and Misyar anymore.  Between Muta’h and Misyar, Muta’h is the one that is the worst.  It’s a private nikah ceremony with a pre-decided date for the end of marriage.  According to Shekh Yasir Qadhi, “As Mutah (temporary marriage) is something which is in the news currently let’s hear an expert on the subject. Here we learn temporary marriage is not allowed in Islam. It was something which was allowed in the early days but was later prohibited (forbidden). The Sharia prohibits this type of marriage, said Sheikh Dr Yasir Qadhi.”

So, what is this? Is this a game of power? Game of fame? Or is this a game of Shaytan? No, it doesn’t matter who we are and what we do.  At first, we are all human; we are children of Adam and we have nafs.  After all these facts, I know that many people won’t believe it, and they shouldn’t. I understand that everyone has their own circumstances and opinion.  But I know one thing clearly, if your daughter was victimizing by any big religious preacher or another man like this, then you wouldn’t deny all of this. So please, destroy your idealist preacher’s models because at first, they are human like us. They have “nafs”, they have evil thoughts, they make sins.  If you don’t want to judge Nouman Ali Khan; don’t judge him, but don’t say that he is clear like pure water. Just wait, Allah knows everything.  It doesn’t matter how hard we trying to convince people against him or in favor of him; at the end, one day the truth will come out.  But please don’t say, that nothing happened because something is still there that we are not able to see.