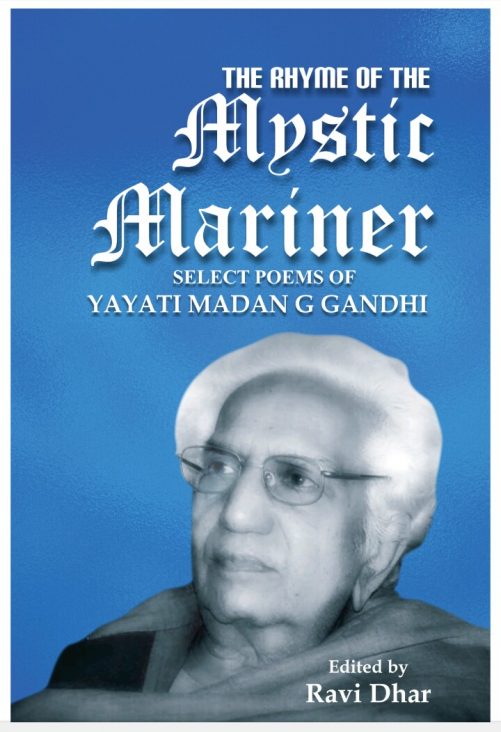 Poetry, according to Lord Bacon, “has something divine in it, because it raises the mind and hurries it into sublimity, by conforming the shows of things to the desires of the soul, instead of subjecting the soul to external things, as reason and history do.”

This “something divine” encompasses a kind of universe in itself and in description of that universe thousands of books have been compiled so far to reveal the varied and variegated aspects of goodness that otherwise remain behind the curtain for majority of living beings. The caravan of compilation will continue until the sun stops to rise from the east.  The Rhyme of Mystic Marinerby Madan Gandhirepresentsa bead on that long illuminating rosary that never compromises to wear the drapes of pessimism but the untiring determination to create avenues that head to the tracks of godliness.

I feel I am on some other planet,

Someone appears on the screen.

go into a coma,

but they will not let me die;

in an instant they revive.

Again I am before the jury,

Mysticism as mode of life aims to bridge the gap of the conscious and the absolute in order to pave the way for the union of human soul and the ultimate reality for the realization of self. In The Teachings of RamanaMaharshi(1978), the great Indian sage RamanaMaharshibeautifully employs the analogy of film projected onto a blank screen in order to explain the nature of enlightenment:

“When the realized man sees the world he sees the Self that is the substratum of all that is seen. Whether the unrealized man sees the world or not, he is ignorant of his true being-the Self. Take the example of a film on a cinema screen. What is there in front of you before the film begins? Only the screen. On that screen you see the entire show, and to all appearances the pictures are real. But go and try to take hold of them and what do you take hold of? The screen on which the pictures appear so real. After the play, when the pictures disappear, what remains? The screen again. So it is with the Self. That alone exists; the pictures come and go. If you hold onto the Self, you will not be deceived by the appearance of the pictures. Nor does it matter at all whether the pictures appear or disappear.”

One of the most difficult things associated with mysticism is that it cannot be described or conveyed adequately in human language. But that doesn’t mean in absence of an adequate verbal language to capture the mystical experience, there are no alternatives upfront in the language.To overcome this hurdle, it is very much important to rely on metaphors, analogies and symbolism.The Rhyme of Mystic Mariner, is full of such metaphors, analogies and symbolism that help the reader to come out with flying colours from the complexities and intricacies of different facets of life.

To know the fullness of life

the process of ripening to fall

and finally to fade off in dust

In between night and morn

The nature of living has changed drastically over the years due to the advancement in technology, and the sad part of it is that most of us have lost the focus of living and it seems each individual is ambling about in waywardness aimlessly. What we are, what target we should have and what this life is for; such concerns are simply and beautifully addressed in the book.

I press on and on,

make my way through every sod

sear and burn like a red hot bar of iron

till I reach the centre of the earth

There in the self-existing smithy

giving shape to many a replica

of the sun many a

The moment I open my eyes

in wild woods of dark delight

you opened wide your arms

Self- realization or enlightenment is in the genes of every being but making the materialistic gains, the compass of happiness has changed it into the latent trait. Great mystic Meister Eckhart likens the process of enlightenment to a seed developing into a mature tree: “The seed of God is within us. Given an intelligent and hardworking farmer, it will thrive and grow up to God, whose seed it is, and accordingly its fruits will be God-nature. Pear seeds grow into pear trees, nut seeds into nut trees, and God seeds into God.”The Rhyme of Mystic Mariner of Madan Gandhi, a disciple of mysticism, is a sincere endeavor and utmost attempt of loyalty to his passion in displaying the sublime canvas of mysticism in such simplicity.

in the heart of

you sow seeds of eternal life

in a world torn by strife

no smooth sailing in valleys

Foraying into the verses of The Rhyme of Mystic Mariner reminds me of the opening couplet of my own poem ‘Mystic Journey’ which is:

Mysticism is about divine dimensional passage

As I age I begin to realize this message.

Dr Madan Gandhi has published this collection of mystic poems at such a stage of his life that suits it best. It is next to impossible to grasp the mystic experiences in early phases of life. It takes time to let the pathways of mysticism open for an individual. As the pre-requisites of mystic experiences, simplicity, non-attachment and egolessness are rarely attained in those phases. He seems to be a master in conveying the goal of a mystic while passing through the adoration of the pre-requisites.

beyond heavens and Hades

Do not resist nor persist

all relaxation flowing from total calm

freedom from tension and fear

Arthur Osborne in RamanaMaharshi and the Path of Self-Knowledge (1987)writes “When a man knows his true Self for the first time something else arises from the depths of his being and takes possession of him. That something is behind the mind; it is infinite, divine, eternal. Some people call it the Kingdom of Heaven, others call it the soul and others again Nirvana, and Hindus call it Liberation; you may give it what name you wish. When this happens a man has not really lost himself; rather he has found himself. Unless and until a man embarks on this quest of the true Self, doubt and uncertainty will follow his footsteps throughout life. The greatest kings and statesmen try to rule others when in their heart of hearts they know they cannot rule themselves. Yet the greatest power is at the command of the man who has penetrated to his inmost depth . . . What is the use of knowing about everything else when you do not yet know who you are? Men avoid this enquiry into the true Self, but what else is there so worthy to be undertaken?” Reading different texts about the basics of mysticism and The Rhyme of Mystic Mariner ofDr Madan Gandhi makes the reader realize how true a mystic he is. He not only knows the basics right but his poems display his mystic inner being. His each fiber of being seems to be a practicing mystic as his poems preach us effortlessly the mystic experiences-the jewels that are rarely present in general people. This poetic composition justifies its title The Rhyme of Mystic Mariner as it works as a stimulus to awakenthe reader’s sense of the sacred.

Star of my nativity proclaims:

“Soon the sun of love will rise

and the night of terror flee.

borne on a high tide.

I come to my own door

Summing it all up, without exaggeration, it can be said that The Rhyme of Mystic Mariner is a discourse for every rational being to help him/her along the art of searching himself/herself.