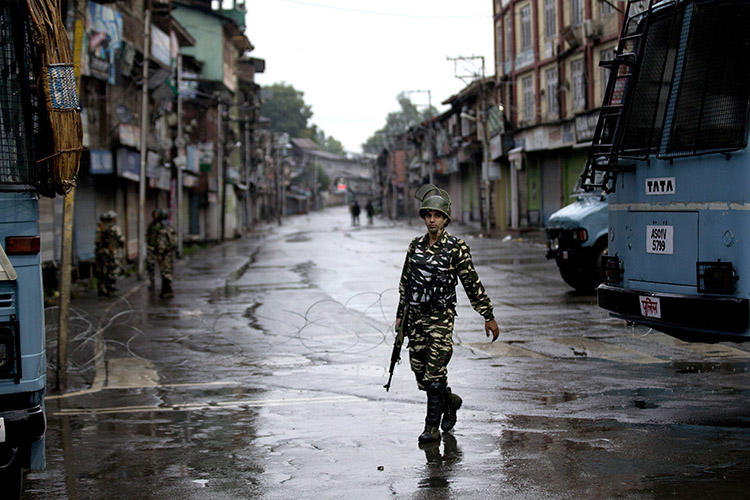 FILE - In this Wednesday, Aug. 14, 2019 file photo, an Indian paramilitary soldier patrols during security lockdown in Srinagar, Indian controlled Kashmir. Gulf Arab countries have remained mostly silent as India’s government moved to strip the Indian-administered sector of Kashmir of its limited autonomy, imposing a sweeping military curfew in the disputed Muslim-majority region and cutting off residents from all communication and the internet. (AP Photo/ Dar Yasin, File)

India has repeated its hegemonic hideousness after 72 years by forcibly appropriating Kashmir once again through an illegal presidential order.

The situation is ominous and does not augur well for the security of the region. It has further necessitated the need for a quick and reasonable solution of the dispute in light of the UN resolutions. One plausible solution is adoption of the Kosovo paradigm which is a doable resolution that can provide the right of self-determination to the Kashmiris and save the region from another cataclysmic war between the two nuclear neighbours.

A quick look at the history, geography and demography of Kashmir and Kosovo reveals great parallels. This trio plays a significant role in a case for self-determination as American jurist and judge of the International Court of Justice Judge Hardy Dillard aptly explained it, “It is for the people to determine the destiny of the territory and not the territory the destiny of the people.”

From1946 to 1963, Albanian Kosovars experienced repression and neglect under the Yugoslav rule as they were placed under Serbian rather than federal authority. The 1974 constitution made Kosovo an autonomous province equal to that of Serbia. Milosevic came to power as president of Serbia in late 1987 and brutalised the Kosovar Albanians, the details of which are known to the world. By 1993, 400,000 Albanians, whose total strength was 88 percent as compared to seven percent Serbs in Kosovo, had fled from Kosovo to avoid persecution at the hands of the Serbs. Thus, a serious struggle for self-determination started.

The Kashmir dispute erupted in August 1947 at the time of the partition of the Subcontinent into two independent states, Pakistan and India. Before the decision of Kashmir’s accession could be made in accordance with the wishes of its people, as per the partition plan, the Indian forces forcibly accessed it to India on October 27, 1947. The people of Kashmir revolted, calling for self-determination. In 1948 the Indo-Pakistan war started over the issue. The UN secured a ceasefire and through a resolution called for a plebiscite to determine the will of the people of Jammu and Kashmir.

Contrary to its commitment, India declined to abide by the UN resolutions. Thus, a serious conflict erupted. According to an Amnesty International report, the Indian forces have killed more than 100,000 Muslim Kashmiris and more than 8000 are missing. However, the resilient Kashmiris’ struggle for self-determination has continued unabated.

There is, however, a palpable distinction between the two cases. The Kosovo case is a one-dimensional case of human rights violation and denial of self-determination, involving two parties, Serbs and Albanians. The Kashmir case is two-dimensional; one, the internal problem akin to Kosovo, involving India and the Kashmiris, and the second, external, a bone of contention between India and Pakistan which has resulted in three wars and as many near-wars between the two over this issue. Over years it has snow-balled into a nuclear flash point. In essence, the Kashmir issue is more dangerous than the Kosovo case.

The UN, in fact, took up both the cases. But the Kosovo case was handled enthusiastically while the Kashmiris’ struggle for self-determination was meted out a rather lackadaisical approach. Resultantly, Kosovo has been resolved and Kashmir is cooling its heels at the UN’s doors. The efforts for Kosovo started from the 1991-92 Badinter Commission which did ‘not consider the option of independence for Kosovo’, followed by three relatively mild UNSC Resolutions (1160 of 31 March ,1998; 1199 of 23 September 1998; and 1239 of 14 May 1999) and climaxed into the forceful Security Council Resolution 1244 of June 10, 1999 passed under binding chapter VII of the UN Charter followed by the Ahtisaari plan which ‘provided Kosovo with everything it would need for statehood’.

The plebiscite was never held because India argued that the UN Resolutions were not binding as the reference was lodged under Article 35 which falls under Chapter VI titled, “Pacific settlement of Disputes”, that could only make recommendations and lacked binding force.

The powers that matter like the US, UK, France, Germany, Belgium, France, Italy (Contact group) went to extra lengths to resolve the Kosovo issue. Nato’s first ever military operation in Europe went ‘far beyond mere peace keeping’. France’s President Sarkozy and US President George Bush made their strong presence felt in the process. The latter even visited Albania and ‘promised rapid independence for Kosovo’. Thus, Kosovo came into being.

The Kashmir crisis has reached a similar dangerous point due to massive human right abuses. Kashmiris demand plebiscite for self-determination as envisaged in the UN resolutions. Only the determination expressed in UN Resolution 1244 (Kosovo) needs to be infused in UN Resolution 47 (Kashmir). Though Kosovo’s birth was declared a special case, not to be considered a precedent for any other case, legally, politically, morally and practically the special case theory has no strength; it is a precedent to be followed for Kashmir.

The second dimension of the conflict is even graver. There is an increasing chance that struggles for independence and self-determination may one day be conducted with weapons of mass destruction. Modi’s presidential order to scrap Article 370 and 35-A has brought the two nuclear states to the brink of another war.

Nevertheless, the objective forces have once again tilted in Pakistan’s favour. Pakistan has come closer to the US for a peaceful settlement of the Afghanistan issue. It will ensure the safe return of US troops from Afghanistan. Besides, President Trump has offered mediation over the Kashmir issue.

Pakistan must seize the opportunity and invoke international concern, especially that of the US and UN, to draw on, as was done in the Kosovo case (‘the entire arsenal of international conflict management tools, from negotiations, to mediation and even coercive diplomacy’”.

The threat, and eventual use, of force might not be required. The Kosovo model is the best available tool to save the region from the impending nuclear war brought so menacingly closer by Modi’s fascist machinations.

The writer is the author of ‘Terrorism in Pakistan: Tehreek-Taliban Pakistan (TTP) and the Challenge to Security’