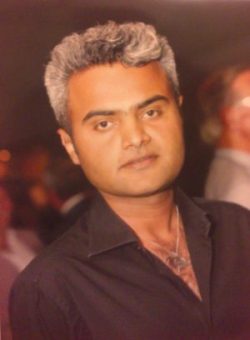 Immediately after the dusk, all the males in the village started gathering in his family Deera, among them were people of every class in that tiny hamlet, his grandfather and all his uncles were present as

well, those who came earlier found place to sit either on the wooden charpais or reeds chairs, new arrivals had to sit on the ground or remain standing. That six-year child was sitting behind his uncle on a charpai, noticing the unusual silence of that evening.

The voice emanating from his grandfather’s smoking Hukka was now interrupting this muteness intermittently, finally, an old man in the crowd said “He was a saintly man” another attendee seconded his statement and said “no doubt” silence fell again for a brief period. Meanwhile, that child was thinking, who was saintly? When his uncle said “his death has created a big vacuum” the child thought, indeed, someone has died, but who? Because whenever someone dies in the village, the mullah of the mosque announces this from its loudspeaker, but there was no announcement that day, then thought, maybe the loudspeaker of the mosque was not working? Baloo Lohar, the only shopkeeper of the village said, “it’s a big loss” Child thought, oh, so he was Baloo’s customer, but shun this idea when he heard someone saying “its difficult time for us, enemy country can attack anytime” That child felt that his village is in danger and can be attacked anytime, first he was scared then he put his hand closed around his neck then to the chest to make sure his weapon, the slingshot is still hanging on him.

Now his grandfather was saying “he was not only brave but pious as well; he devoted his life to Islam and Muslims, he was a terror in infidel’s hearts” he thought, was that person from our village, maybe not,

because he didn’t know anyone like that, then another notion came to his mind, may be they are talking about someone from nearby village, he was looking at every face in that crowd, serious and in mourning. He was scared and wanted to go to his mother, who was at home, few dozen yards away from this place but decided to stay with his grandfather and uncles because now this few minutes’ walk in the darkness of that night was frightening him.

He was thinking the deceased was indeed a brave and significant personality, that’s why the whole village is worried, maybe he was our saviour and his death is going to bring disaster and misery, now our religion and village both are at peril, once again he checked his slingshot then he took it off from neck and held it in his hand’s juvenile grip. Of course, he was terrified.

Then his uncle ordered a servant to bring transistor radio, he thought, why radio, nobody listens to music when someone dies. Radio was tuned to a channel, news had started and the first news he heard was “Today, President of Pakistan General Zia-ul-Haq died in a plane crash near………”

After carefully listening to the news for few moments, the child looked back on the mourning crowd as they were a bunch of idiots. Now in the darkness of that night, he was walking alone towards home to be with his mother, while his slingshot was again around his neck, like a garland.

K S Sial  is London based Novelist and a political activist.