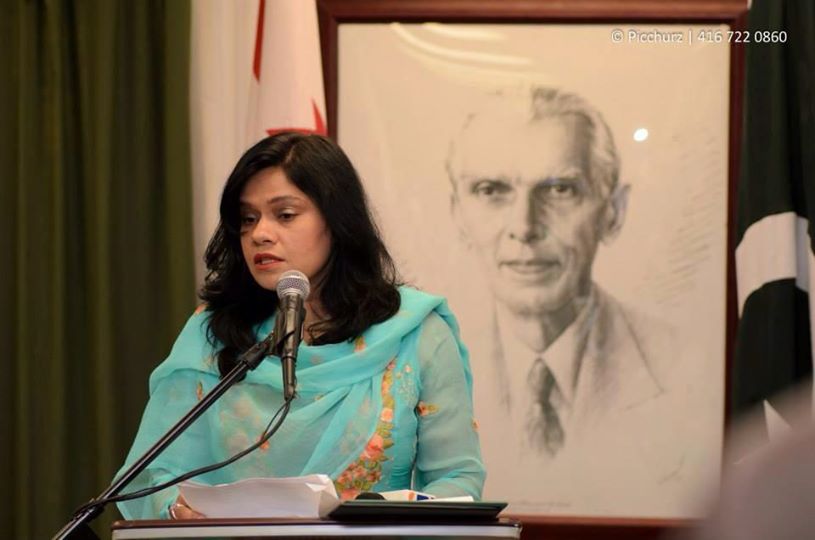 Fourteen years ago, the Afzaal family would have thought about leaving Pakistan in the face of the ever-present corruption, hypocrisy, prejudice, religious extremism and the security for the children. Just as many of us, the immigrants, may have thought at some time in the past. No one wants to burn their ships in vain in the anticipation of happiness in the new country. The family must have chosen Canada in the hope to get away from all the bad elements in Pakistan. But this choice turned out to be a death warrant for them.

Residing in London, Ontario, the family did not only represent a decent example of Pakistan and Islam but also upheld the values of decency and compassion. The family possessed all the qualities of turning a society into delightful and peaceful experience. Salman Afzaal (46) was from Faisalabad, a physician, a cricket player, a regular mosque goer, used to visit old people’s homes for offering volunteer services. His wife, Madiha (44), an engineer, was in Ph.D program in environmental engineering at Western Ontario University. She was a writer and loved literature. Salman and Madiha’s daughter, Yumna (15), was a graduate of London Islamic School. Upon graduation, she painted a mural on the school wall and added a caption: It’s good to have a wish to go to the moon, that way, you are always among the stars. She wanted to leave behind a memento that people would remember her by. She had no idea how monumental that mural was going to become.

Nine years old Faa’iz, who was the youngest member of the highly educated family of high ideals, is the only one who escaped death with severe injuries while the other 4 perished as the result of the terror attack. Salman’s mother, Talat (74) used to be a teacher in an Art & Craft school in Faisalabad. She was leading the family towards higher goals. The family, with their feet firmly on ground was a source of knowledge, art, literature, culture and humanitarianism wherever they went.

But on 7th of June, a 20 years old terrorist, a religious or racial extremist, an uncouth local truck driver saw them in their Muslim clothes strolling on the street, decided to mow them down under his pickup truck. Obviously, he took them as terrorists just as the western media has been depicting for years. He is the product of the western journalism and disinformation that we see all around us. We, the Canadians, all of us are responsible for this as we do not raise voice against this false propaganda.

The hate of this young truck driver has wiped out the family except one young boy. When nine years old Faiz will ask us who killed his family, all we can do is tell him the name of one person, the truck driver. In fact, all those people are responsible for this crime who have been constantly spreading disinformation against Muslims and sowing the seeds of hatred against them.

The people of the town consoled themselves;

Those who have gone, did not belong to the town.

There was a case in Mississauga, Ontario in 2007, in Muslim family, a father killed his teen age daughter, allegedly for not wearing hijab. I wrote a column about this incident and raised the question if the murder was really because of hijab or was there some thing else within the family dynamics. I wrote in my column if indication of religion was necessary in the news. They may have had some other psychological issue in the family and religion may not have any part to play. I did not justify the murder, in fact, I condemned the act strongly. But many Muslim writers criticized me saying that my reaction to the case was tantamount to supporting a “marriage to the Quran”, while I was only criticizing media for being one-sided. A Toronto tabloid often published reports news about Muslims in a way to create hate against them. As the family lived in Mississauga, the girl went to the local schools. Later when I inquired more about the girl from her friends and their mothers, the information that I had collected confirmed my fears. The real story was very different from what was reported by the media. Such incident could have happened in any family, irrespective of their religion. No one tried to dig deep into the incident, they only knew that a girl was murdered by her father in a Muslim family.

In the US, there was a case of a Chinese student who was involved in a mass murder using gun. No one reported his faith whether he was an atheist, Jew, Hindu, Buddhist or Christian. The important thing should have been the psychoanalysis of this individual.

There is another family tragedy that took place in a Sikh family in Canada. It is a heart wrenching story of parental control. The girl wanted to marry a poor rickshaw driver in India. The girl’s parents hired hit men in India to murder the girl when she went to India to see him. The news was reported in Canadian papers as well, but it was not reported as honor killing.

Coming back to the London terrorist, we still don’t know his religion and even his mugshot has not been released by the London police. Perhaps his security is important. The question is what about the security of Muslims who are regularly victimized in the hands of Muslim hating terrorists. Because of slanted newspaper reports, Muslims are taken to be terrorists or backward people.

Who is responsible for the prejudice and hate being spread in the country against certain ethnic groups because of irresponsible newspaper reporting? Is the Canadian journalism responsible for it or is it the silence of the government?

According to the National Council of Canadian Muslims (NCCM), there were 300 cases of terrorist acts that took place against Muslims during 2015-19.

Let alone the western news media, among our own intellectuals, there are many irresponsible individuals who appear to earn their living by maligning the Muslim community. They spread disinformation against Islam and Muslims and then the whole innocent community reaps what a few black sheep have sown. Some of these hate mongers would pick up a senseless statement made by a semi-literate cleric in some remote village of Pakistan and present it in the western main-stream media making it look like a prominent aspect of Islam or Muslim way of life only in the interest of sensationalizing their column through great exaggeration that had no value at the source and has no importance for the people in the west. They present Islam as a religion of ignorant and backward people only because there is a market for such news, which was actually created by these insensitive and selfish journalists and now making money and gaining an easy and cheap popularity by selling disinformation. All this is done to promote the readership of their column at the cost of truth.

Our prime minister, Justin Trudeau recently stated, “If anyone thinks that Canada is without religious and racial prejudices then, I would like to know what do we tell that injured child in the London hospital how all this happened?” The PM further added, “How can we look into the eyes of the Muslims and tell them Islamophobia does not exist?”

The statements made by the prime minister are of political nature or not, but at least he has recognized the truth and I admire him for that. No doubt, that Canada is a beautiful and generally a peaceful country, but one will have to admit that the rate at which religious or racial prejudice is being quietly propagated, it will be a crime to stay quiet about it. When the societies stay indifferent towards the propagation of various prejudices, then eventually, stopping of extremism becomes impossible.

We have living examples of India and Pakistan where hatred was planted step by step on the issues of religious discords. We cannot afford to bury our heads in sand and hope that the problem will go away by itself. No, we have to look at the challenges in the eye and take steps to curtail them for a peaceful future for all.

Strong reaction and negation would be in order against those who have an agenda of spreading hate against Muslims. They should be banned from writing in the main-stream newspapers. When these people write their gibberish on social media, instead of ignoring them, they should strongly be opposed using an organized campaign against them. These are the snakes in the grass who are responsible to turn the peaceful Canadian environment into racial or religious conflicts. These conflicts may not be limited to Muslims but other minorities can also become victims of it. The example of the innocent Afzaal family of London should provide us a beacon of light in the interest of a peaceful future of our future generations. We must not allow the ruthless murder of this family to go in vain. If we are not ready to take the venomous journalism head on, it will continue spreading prejudice, misinformation and hate in the country. Our customary display of sympathy alone will not be of any practical use.

In January 2017, a similar unfortunate incident took place at the Islamic Center of Quebec City when a hate monger opened fire with an automatic rifle on people offering prayers at the mosque. The terrorist killed 6 and 5 were seriously wounded.

In the House of Commons, in March 2017, the Liberal party along with NDP proposed to enact a law against Islamophobia and all other religious or racial prejudices. This was strongly opposed by Erin O’Tool of PC, the leader of opposition with 85 members of his party. Now the same Leader of the Opposition has stated that according to the police, the recent incident that took place in London was indeed an act of terrorism. The police has warned that intolerance, hate mongering, terrorism and Islamophobia is on the rise  in Canada.

Last Monday, The Leader of Opposition, Erin O’Tool tweeted that there is no room in Canada for Islamophobia, and such controversial attitudes must be opposed strongly.

Alas, if Afzaal family was around, they would have liked to comment on such hypocritical flipflop by saying:

Thank you for sending us to our graves, thank you;

From here we will find our own way to the destination.

I sincerely pray for the souls of the Afzaal family that have gone from this world, also my prayers for young Faa’iz. It is my wish, when Faa’iz comes out of the hospital he finds Canada as attractive as it appeared to his parents when they decided to make Canada their new home. And I wish that he will soon overcome his grief and become a productive citizen of the country to carry out the goals his parents had in mind for the family.

Although, he will be looking for his parents, but unfortunately his eyes will not find them at home or any where in the world.

Death is an honor for those who are missed dearly for ever;

However, we all come to this world only to die someday.