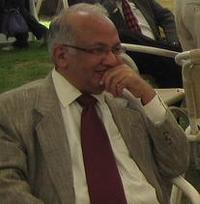 Dr. Zafar Altaf’s ( Z.A to friends and foes alike) writings are an informed agitation, against the inadequacies of state apparatus. These fall in the category of ceaseless tweets beyond 140 characters. They reflect his vast knowledge, myriad experiences and seething anger, without ever stepping- out of the genre of a written protest.

​Having been far too and often precariously close to him since last 38 years, I can clearly map- mark, mental development of his writings. At times those temporarily but still very close to him would suggest him to off load me from the bandwagons of his loved- ones. We shared various disparities from service group to interest portals. His pet reply would be I am unable to find an enemy who had been around for so long how I would find a companion like him. My survival on his friend list owes more to time and love rather than my advice and service.

Z. A was happy man when he left for his PhD for Birmingham University-U.K. In 1980 when he returned to collect some data based on primary research and conduct interviews with rich and powerful. In Karachi, I would tag along with him, only to notice his bitterness over the realization that majority of these moneyed -mighties in their insatiable greed have sacrificed national goal of public goods over private fortunes.

​A year later, he returned with an impressive prefix of Doctor to his name in 1981. It was easy to observe that long hours spent on his study desk in UK has sharpened his focus, bent his back a bit and has made further addition to his disillusionment with state machinery.

​These were days of Generals. Zia who was firmly saddled as President, Army Chief and Darling of USA. His not less sly benefactor and soon to fall into disgrace General Geelani was iron man of Punjab badly groping for another Iron Man amongst bloody civilians. He soon found them in Model Town, Lahore. This was birth of Shareefs in the politics.

​General Geelani made him taste his first disillusionment in Bureaucracy after having been short- changed in Test Cricket by famous family of Cricketers from Karachi. Z.A lost his favorite posting of Secretary Agriculture Punjab to father of a famous Olympian Akhtar Rasool who was Punjabi, Arain and possibly from Jullundhar too; a lethal mix which was as dear to Gen Zia as was being from Army, Islamist and Bhutto- hater Armoured Corp , Julluhndur and Intelligence favored were considered as additional of basket-weave, bling, Chevron and cherries in baking a cake . He was posted as Secretary Live Stock- Punjab.

Instead of fretting about the loss, Z. A started to work harder and soon found a mentor in person of Anwer Zahid , the Chief Secretary Punjab who would say yes most of the time to address some well-meaning fantasies of General Geelani. This was because Z.A was his beast of burden and what beast. The C.S would love him more than many thorough- bred in his bureaucratic stables.

The contribution which Z. A made in those days were enormously productive though his disappointment was exponentially growing, By now his Acharya Group of Brahmans DMG s was heavily defiled and polluted by three tributaries of entrants

​1] Sons and Son in Laws of Generals through fixed quotas

​III ] Mercy Entrants who consisted of failures among Urban and Rural candidates of CSS .

There was new order in bureaucracy. Traditional officer crafted on Confucian bureaucratic model of Mandarins or Scholar Officers were no more acting as Steel Frame but a new breed of officers in the mold and manner of Waqar Ahmed., N.H. Jaffery, Gulzar Bano all from Accounts Group and only ready to say no when statement was in numeric terms were to be seen all around in place of of Dr. Tariq Siddiuqi, Qudrat ullah Shahab, Masood Mufti, Altaf Gohar and few more.

It was here as Secretary in Provincial Government, Chief Economist that Z. A discovered his new love and credit goes to Zafar Samdani, who was, the doyen of English Journalism in Pakistan.Z.A among his research, report writing, and other official engagements met Zafar Samdani, who lured him to write columns and Z.A took the bet little too perilously . Frontier Post edited by ebullient Mr. Samadani (who was a constant companion to Madame Noorjehan and had many stories to share mostly as failed lover and time-tested friend to her) reserved a permanent place for him in his paper which by many accounts was annoyingly deviant for the stoic establishment and therefore out to earn many foes and few friends, which Z.A too shared by default.

​Z. A would write incessantly. The bureaucracy which other than luring colors of a chameleon moves like a house -lizard on the wall is not known for quantifiable decibel and journalistic opinions. These opinions did not matter much to official circles expect sowing the seeds of discontent and malice. If one reads his columns carefully which appeared in many newspapers, they don’t kick up any earth-shaking controversy or slander but then there were many layers from readers to interpreters. Islamabad is not like other capitals of the world. Here people breathe conspiracies, eat lies and regurgitated gossips in the form of vindictive pellets like female Hyenas.

Z.A persisted with his opinions, annoying most of the people most of the time including the man who despite being Prime Minister drooled over the figure skating honed legs of a secretary of state only to be called a blithering idiot.(Marcus Morbie book “Twice as Good”) .A remark here taken out of context would often pierce like a hedgehog thorn in the eyes of some lion now and then and Z. A had to duck under their bouncer. His observation would still hurt the bouncers in M/O Finance when he writes;

Nothing on earth is more self -righteous and wiser than man in power.

Now when here is the catch. These are not good times to say such things. Not in times when you are an officer at a pinnacle of your career and you see three top Federal asli tey waddey CSPs DMGs, sitting at the feet of prime ministerial spouse each frantacillyy searching a shoe under the bed in a Hotel in Kuala lumpur..Later when we would discuss one of their ilk wud say “ O sir tusi Thailand dey king no nai wakhya othay jarnail ki kardey ney”

Sir you have not seen how respectful are army generals when they are in attendance before king of Thailand. My idea of a King was indomitable actor Yul Brynner in the movie The King & I but then I found an image which still can come handy as a point of reference for those who feels some inadequacy in their obeisance

Now that journey of his journalistic forays, feels as old as his skin and comfortably inevitable too. Z.A has many books to his credit. The current one is collection of his columns which appeared in The Business Recorder.

From the days of Zafar Samdani Few things have happened around him .His friends have gone weak and his enemies far more tolerant, the anger has gone numb, the quest bit blurred but all these shortages have been replaced by a more ferocious fire of offering best to Pakistan .Unfortuantely those who matter in policy formulation and implementation only set their eyes on written words are when they open their cheque books otherwise many like Z.A only dig a well with a sewing needle.The written word and print media has been beaten down by electronic media which is a maternity home to despondency and in the same bewailing tone of Sardar Akhtar Mengal of Baluuchistan “ “hamara media per itna tu haq hey jitna qurabani key achey janwar ki coverage ka hey”.( we have as much right on media as a good sacrificial animal has on Media)

So writing a column is more like a shepherd song. But a shepherd must sing for wind is always listening,

*Silly Midon: A catching position in the field. Very close to the batsman, so-called because of the perceived danger of being hit​Page 4

Iqbal Diwan is a retired bureaucrat and famous writer both in Urdu & English. Friends call him Latest and Pakistani version of Khushwant Singh.