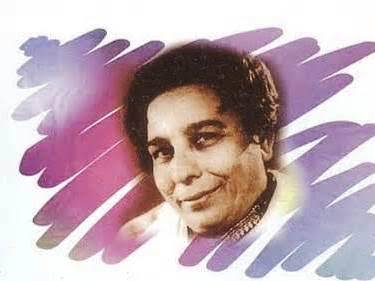 (A ‘shard’ from my book MEMORY SHARDS)

She was a senior to me by 17 years. I was just a lad back in 1955 when I met her for the first time. It was a gala affair at the ITTP hall where she was the chief artiste. The audience was composed mostly of film personalities and some of them repeatedly asked her to sing Dunia Mein ghareebon ko aaram nahin milta, دنیا میں غریبوں کو آرام نہیںملتا    , her hit song in the film “Zamindar”.

Since I was with my friend Sahir Ludhianvi, I had the honor of meeting her at tea after the event. We sat with her at the same table. I don’t know what happened and how I appealed to her but she beckoned me to come and sit next to her, which I gleefully did. We talked of small things. When I told her that I was an Urdu poet and short story writer, she asked me to recite a ghazal of my own, which I did. To my surprise she praised it but since I had recited it teht ullfz i.e. the usual way things are read aloud, she said, “Shaer ko tarannum se parhna chahiye.  شاعرکو ترنم سے پڑھنا چاہیے.

Let me add for my readers of this column that in those days I was as much a votary of the ghazal as any other poet.

Some years back when I learned that she had belatedly been given Padma Bhushan award – too little, too late, I dug up my old records which I had got converted into C.Ds. One song that haunted me all the time was Ek Kali Nazon se Pali,   ایک کلی نازوں سے پلیthe lead song in the film Khazanchi. But I think she earned many more laurels for her immortal song Chhod Babul ka Ghar, mohey pe ke nagar, aaj jana pada, چھوڑ بابل کا گھر مجھے پی کے نگرآج جانا پڑا۔  in “Mother India” an immortal film itself.

Shamshad (“Begum” was an addendum later on) was a Punjabi, born in Amritsar. A great admirer of Saigal, she says that she watched his film “Devdas for as many as 14 times.” Although there is no comparison between a male singer and a female singer, I believe the lilt in her melody is reminiscent of Saigal’s famous ‘’d..r..a..w.. l’’ (If I am permitted to spell “drawl” as I have done!).

She was married to Ganpat Lal Batto and had a daughter, Usha Ratra. Both her daughter and son live in Bombay – and although she is out of the limelight and media glare now, she occasionally attends functions and parties in Bollywood and mixes easily with the younger group.

She began her singing career at the All India Radio, Peshawar. Among other stations, Lahore and Delhi were fortunate to have her talent for some years. In those days, the reach of broadcasts hardly went beyond a hundred miles or so and Lahorewallas and Delhiwallahs must have enjoyed her singing, fresh like the morning breeze.

ایک راز کی بات بتاؤں آپ کو؟? Shall I tell you a secret?

I have this on the authority of Sahir Ludhianvi in a private chat with me.  Shamshad was never happy to have her picture taken. She avoided photographers. Was it because she wasn’t a beauty like Noor Jehan? No, but her junior singers the two Mangeshkar sisters are no houries (nymphs of Muslim paradise) either – and they rather enjoy being photographed. Anyway, not many photographs of Shamshad Begum are in circulation. A painting done by her son-in-law is hung in her bedroom (not the sitting room and even a few close friends who come to meet her, don’t see it!)

How did she rise to fame? It is said that her crystal clear voice caught the attention of the sarangi maestro Ustad Hussain Bakshwale, and he it was who offered to take her as his disciple شاگردہ . Lahore film world was the first to give her work in the movies. Ghulam Haider helped her make her film debut in Khazanchi, Khandan, and one other film. He moved to Bombay and so did Shamshad Begum.” Did she ever sing a modern song?”, asks a friend who is sitting nearby while I am writing this column? “Yes, “ I tell him, “She sang the famous Aana meri Jaan, Sunday Ke Sunday.  آنا میری جان سنڈے کے سنڈے   He is surprised for he did not know the song was sung by her.

Let me add just a few words more. This is my own personal opinion. Her voice leans towards a nasal twang, but the words are so clear that she can immediately be recognized in the crowd of other singers of the yesteryears, Amir Bai Karnataki, Geeta Dutt, Lata Mangeshkar, Asha Bhonsle, and Noor Jehan. O.P. Nayyar once said that Shamshad Begum’s voice was like a temple bell for its distinctive clarity of tone, tenor, and tempo.

Who Killed Babar Qadri and How We Should Respond?